For the first time in their 137-year history, Leicester won the oldest trophy in club football. More importantly, their triumph broke the so-called ‘Big Six’ hegemony in English/European football. 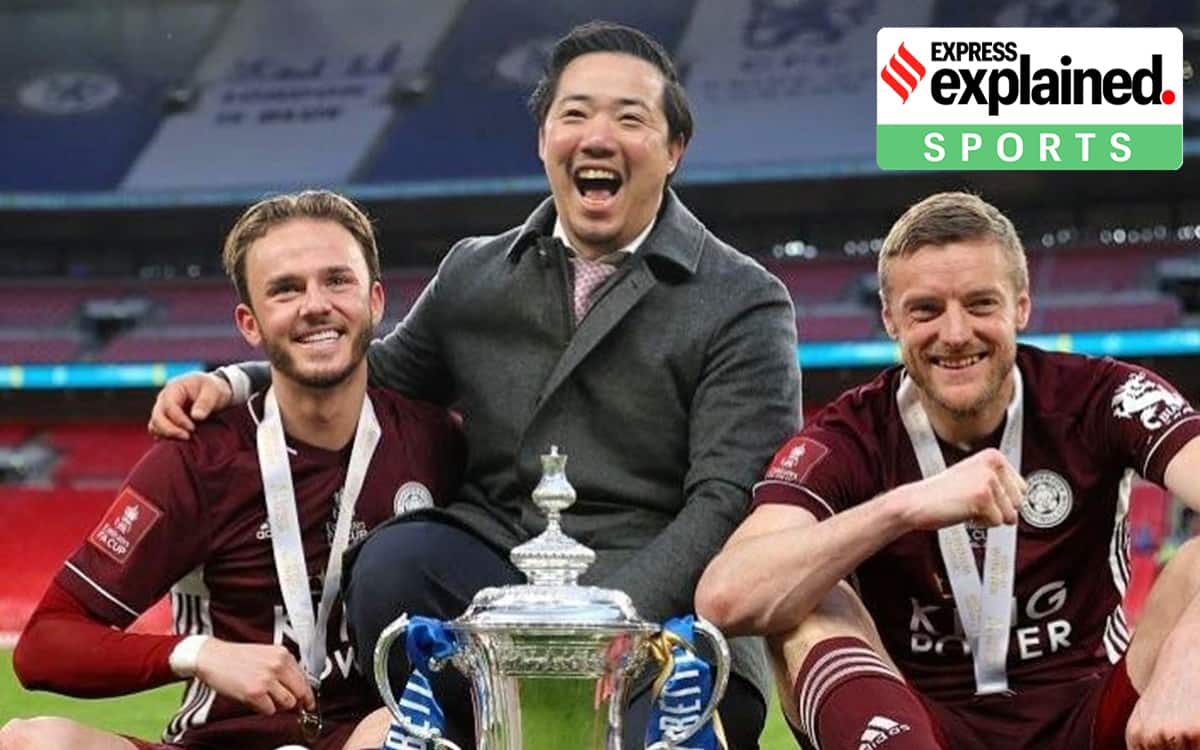 The 36-year-old Leicester City chairman (middle) took up the mantle from his late father Vichai to guide the club to more success. (Leicester city/Twitter)

“The Wembley net bulges from the Belgian’s strike,” match commentator Martin Tyler belted out on TV, as Leicester City took the lead against Chelsea in the FA Cup final. But going beyond Youri Tielemans’ super strike and Kasper Schmeichel’s wonder save at the death, the real dilly-ding, dilly-delight – paraphrasing Leicester City’s theme song (dilly-ding, dilly-dong) – moment came after the trophy presentation. Schmeichel ushered in club owner Aiyawatt ‘Khun Top’ Srivaddhanaprabha on to the pitch and the Foxes revelled in a close-knit family. At a time when club owners, players and supporters don’t always see eye to eye, Khun Top comes like a breath of fresh air.

For the first time in their 137-year history, Leicester won the oldest trophy in club football. More importantly, their triumph broke the so-called ‘Big Six’ hegemony in English/European football. Leicester had won the Premier League in 2015-16. Their FA Cup success on Saturday meant that a club outside the European Super League breakaway group lifted silverware. Manchester City have won the league and the League Cup. They will face Chelsea in the Champions League final, while Manchester United are considered to be overwhelming favourites against Villarreal in the Europa League final.

How the Leicester camaraderie came to the fore during post-match celebration?

Eyes were on Khun Top throughout the game. The 36-year-old Leicester City chairman took up the mantle from his late father Vichai to guide the club to more success. As Schmeichel invited him to the pitch, Khun Top hugged the players and made a beeline for Brendan Rodgers, the first-team manager. The two had a long embrace. It was in stark contrast to what has been happening elsewhere in English top-flight football, where supporters are at war against club owners.

“I don’t think there is a club more connected from top to bottom as what we see with this club,” former Manchester United and England defender Rio Ferdinand said on BT Sport. Former Chelsea and England midfielder Joe Cole agreed. “There will be some big clubs out there and some I played for who will be jealous and envious of these owners. I don’t think you will see another owner come on the pitch and be loved like this man has been loved, to be embraced as he has been embraced.”

How are Leicester City owners different to the majority of their ‘Big Six’ counterparts?

‘GlazersOut’ is arguably the most used football hashtag at the moment. Manchester United supporters allege that the owners have drained more than £1 billion from the club. The sextet’s botched attempt to unveil the European Super League – along with six other continental bigwigs – proved to be the catalyst. The owners’ apologies weren’t accepted. A fortnight ago, United fans invaded Old Trafford, forcing their game against Liverpool to be called off.

A few days back, Casey Stoney announced her decision to step down as manager of Manchester United Women and tensions between her and the club over poor facilities for the players were pointed out. Daily Mail reported that players were “unable to shower in between training and meals before makeshift portacabins were installed” and the “nearest toilets are a 10-minute walk from their training pitch”.

Just hours before the FA Cup final, Tottenham Hotspur fans gathered outside the club stadium and protested against owners ENIC and chairman Daniel Levy. Spurs have won just one League Cup in 20 years, although they were a part of the ESL.

“Get out of our club,” Arsenal fans recently unfurled banners to protest against club owner Stan Kroenke, while Liverpool fans have been putting out banners: “£nough is £nough, FSG (American owners) Out”.

Leicester City in contrast are a club which, as Cole said; “has got everyone to man, woman and child pointing in the right direction”. At a time, when the majority of the owners allegedly use their acquisitions as money-spinning machines, the Foxes have embraced football, footballers, staff and community. Khun Top is carrying forward the legacy of his father after the latter’s death in a helicopter crash outside the King Power Stadium on October 27, 2018.

As Ferdinand said, this is an ownership with a ‘face’, which is the “difference.”

There have been examples aplenty, from gifting each member of the 2015-16 title-winning squad a luxury BMW to donating £2 million to Leicester Children’s Hospital for setting up intensive care units. Last year, LeicestershireLive reported that a survey of 3,000 English football supporters had voted King Power as the best club owners in the Premier League. The report also mentioned how Khun Top paid for 75 hotel rooms for a group of fans who got stuck in Calais during Storm Ciara after travelling to support Leicester’s Belgian sister club OH Leuven.

How have they been doing on the pitch?

Leicester are placed third in the Premier League table, on the verge of securing Champions League football next season. An excellent recruitment policy has helped. Figures put out by Squawka show how they profited from the Ben Chilwell deal with Chelsea last summer, selling the left-back for £50 million and bringing Timothy Castagne for £18 million as his replacement. In 2018, they sold Riyad Mahrez to Manchester City for £60 million, replacing him with James Maddison for £20 million. Maddison has grown in stature since.

In the same transfer window, the Foxes sold Harry Maguire to Manchester United for £80 million and brought on Caglar Soyuncu for £13 million. They are now very close to landing Lille midfielder Boubakary Soumare at a bargain £20 million deal, sensing that Wilfred Ndidi – N’Golo Kante’s replacement in 2017 – might leave in the summer.

There has been stability top down, from owners to the manager. Little wonder then that Maguire doffed his hat after the FA final. “Vichai will be smiling. Congratulations @LCFC,” the United captain tweeted.