Explained: How Ethiopia’s Tigray crisis is impacting the Horn of Africa

If the conflict were to spill outside Ethiopia’s borders, it may potentially destabilise the Horn of Africa region. The US and China have several strategic military bases in that region, the closest being Djibouti. Members of Amhara region militias ride on their truck as they head to the mission to face the Tigray People's Liberation Front (TPLF), in Sanja, Amhara region near a border with Tigray, Ethiopia, November 9, 2020. (Reuters Photo: Tiksa Negeri)

When Ethiopia’s domestic conflict began earlier this month, observers had feared that it would spill outside the country’s borders and have ramifications in the Horn of Africa region at large. Now with the involvement of neighbouring Eritrea earlier this week, it appears that these concerns were not unfounded.

What is the most recent development?

The conflict escalated this week when Tigrayan forces in northern Ethiopia fired rockets across the border into Eritrea, claiming that the Ethiopian government was using an Eritrean airport to attack Tigray.

On Saturday night, there were reports of rockets landing near the airport in Asmara, Eritrea’s capital, but there were no casualties. According to a BBC report, Tigrayan leader Debretsion Gebremichael had said that over the past few days, his forces have been fighting 16 divisions of the Eritrean army. Tigrayan leaders have also accused Eritrean forces of entering Ethiopia to support the federal government in its fight against Tigray.

These accusations were denied by Ethiopia’s prime minister Abiy Ahmed who stated in a tweet on Sunday that Ethiopia was more than capable of achieving its objectives in Tigray “by itself”. The leader did not specifically address Debretsion’s claims or mention Eritrea.

Why is there animosity between Tigray and Eritrea?

The animosity between Tigrayans and Eritrea goes back to the Ethiopian-Eritrean war that occurred between 1998 and 2000. According to The New York Times, “many veterans from the TPLF (Tigray People’s Liberation Front) who participated in the Ethiopian-Eritrean war between 1998 and 2000 are now part of the Tigray region’s paramilitary forces”. The animosity between these TPLF veterans and Eritrea continues till date.

This war that occurred approximately two decades ago was extremely brutal and resulted in the deaths of thousands of soldiers. Last year, Abiy won the Nobel Peace Prize because of his efforts that resulted in peace with Eritrea’s leadership, but despite their improvement in relations with Addis Ababa, Asmara continues to remain hostile to Tigrayans and their leaders because of the war. 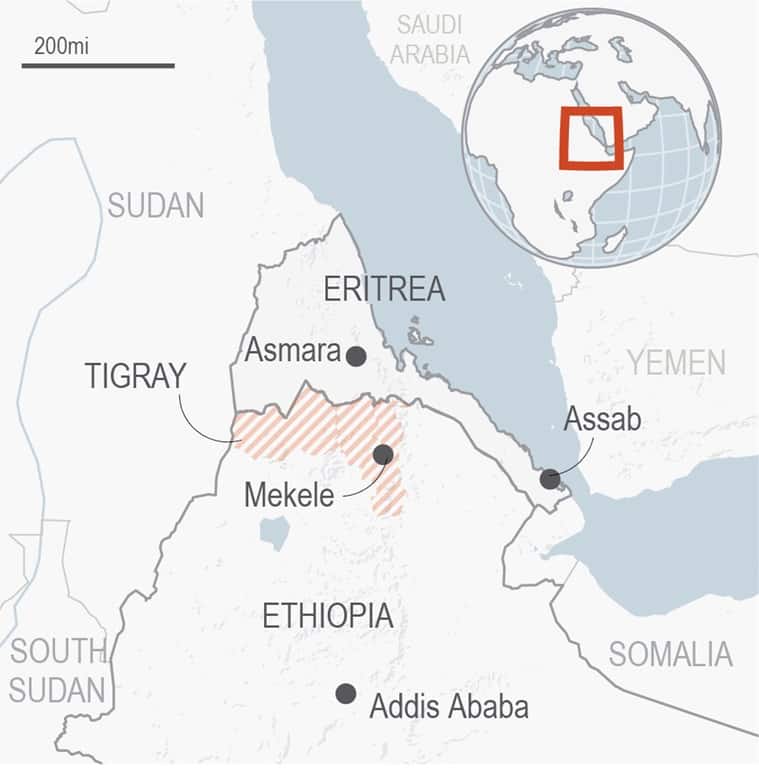 What are the humanitarian concerns?

After the conflict started earlier this month, thousands of Ethiopian civilians were displaced. The UNHCR reported that thousands of refugees had been crossing over the border and arriving in Sudan after fighting began and the international organisation anticipated many more arriving as the conflict escalated.

There have been reports of blocked roads, with internet and communication lines being cut off in Ethiopia. Prior to the start of this conflict, there were already several thousand civilians who were internally displaced in Tigray, in what researchers say was an aftermath of the Ethiopia-Eritrea war. Now, this latest conflict has only increased the number of displaced people and may lead to a humanitarian crisis. 📣 Express Explained is now on Telegram

What impact will this have on the Horn of Africa region?

With Ethiopian civilians escaping in large numbers to Sudan, the country may find itself inadvertently drawn into the war. Earlier this year, in the midst of Ethiopia’s long-standing conflict with Egypt over the construction of the Grand Ethiopian Renaissance Dam over the Blue Nile, Sudan had already found itself forcefully involved in the spat.

The Ethiopian government is ready to receive and reintegrate our fellow Ethiopians fleeing to neighboring countries. We vow to our innocent civilians that have fled, to protect their property, enable humanitarian support by the ENDF and guarantee their peace upon return.

On Saturday, Sudan and Egypt were engaged in joint military exercises in what observers said was an indication of deepening ties between the two countries. According to a Reuters report, the “International Crisis Group, a think-tank, warned on Nov. 5 that any involvement by Eritrea in the conflict could in turn draw in Sudan.”

If the conflict were to spill outside Ethiopia’s borders, it may potentially destabilise the Horn of Africa region. The US and China have several strategic military bases in that region, the closest being Djibouti. On November 16, Reuters reported that President Vladimir Putin had approved the creation of a Russian naval facility in Sudan earlier this week that would be “capable of mooring nuclear-powered surface vessels, clearing the way for Moscow’s first substantial military foothold in Africa since the Soviet fall.” If these military bases and facilities were to be impacted in any way, it may cause foreign powers to get militarily involved in the region’s conflict.

“The stability of Ethiopia is important for the entire Horn of Africa region. I call for an immediate de-escalation of tensions and a peaceful resolution to the dispute,” UN Secretary General António Guterres had said in a Twitter post last week.

I’m deeply alarmed over the situation in the Tigray region of Ethiopia.

The stability of Ethiopia is important for the entire Horn of Africa region.

I call for an immediate de-escalation of tensions and a peaceful resolution to the dispute.https://t.co/nWtI2JtGlu

Don’t miss from Explained | Who is Khadim Hussain Rizvi, the Barelvi cleric whose supporters are protesting France caricatures in Pakistan?