Aramco drone attack: This is the largest-ever disruption in crude oil production in Saudi Arabia, which supplies 10 per cent of global world supply and is the world’s largest crude oil exporter. 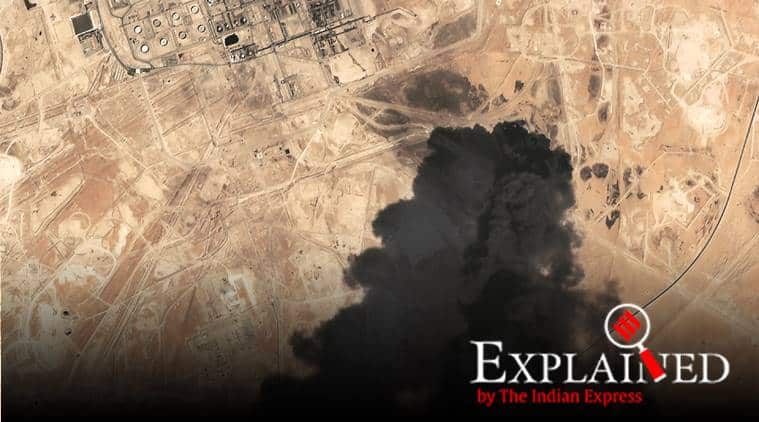 On Saturday, the Houthis, a rebel Shia group of Yemen that is backed by Iran, bombed the Abqaiq plant as well as the Khurais oil field in Saudi Arabia. The attack, executed by drones, meant that Saudi Aramco, the state-owned oil company, had to not only suspend the production of almost 6 million barrels per day (about 6 per cent of global oil supply) but also restrict the use of 2 mbd of spare capacity. This is the largest-ever disruption in crude oil production in Saudi Arabia, which supplies 10 per cent of global world supply and is the world’s largest crude oil exporter.

As the chart below shows, even without the latest disruption, according to International Energy Agency (IEA) — an autonomous Paris-based organisation with 30 member-countries of the Organisation for Economic Co-operation and Development (OECD) as its members — the second half of the current calendar year would have seen a decline of 0.8 mbd because of already stagnating supplies. That is why oil prices too were expected to move up. The latest disruption — of an additional 6 mbd — is substantial.

However, as a report from Kotak Institutional Equities Research points out, the world has a large enough oil buffer to tide over the current disruption. For instance, OECD countries have 2.93 billion barrels of commercial petroleum inventories and another 1.55 billion barrels of strategic reserves, which are under government control. As such, it states, “ if we assume that Saudi’s disrupted oil supplies remain out of the market entirely for the next three months, it can be serviced by 11-12% of OECD inventories”.

Extent of the oil price shock

To the extent that the world has enough inventories to tide over the immediate shortfall, and assuming that this attack is not the start of a long streak of international hostilities between a US-led bloc (including Saudi Arabia) and an Iran-led bloc (including the Houthis), the price shock could be relatively limited.

Even so, crude oil prices have already shot up by over 10 per cent, and the Brent price was $66.6 per barrel as of Monday evening. Brent futures have jumped 20 per cent. According to most estimates, oil prices are likely to trend around the $75 per barrel mark in the coming months.

However, prices will keenly reflect not just the immediate disruption but also the likely disruption should the US initiate some kind of military response. In a tweet on Sunday, US President Donald Trump said: “Saudi Arabia oil supply was attacked. There is reason to believe that we know the culprit, are locked and loaded depending on verification, but are waiting to hear from the Kingdom as to who they believe was the cause of this attack, and under what terms we would proceed!” 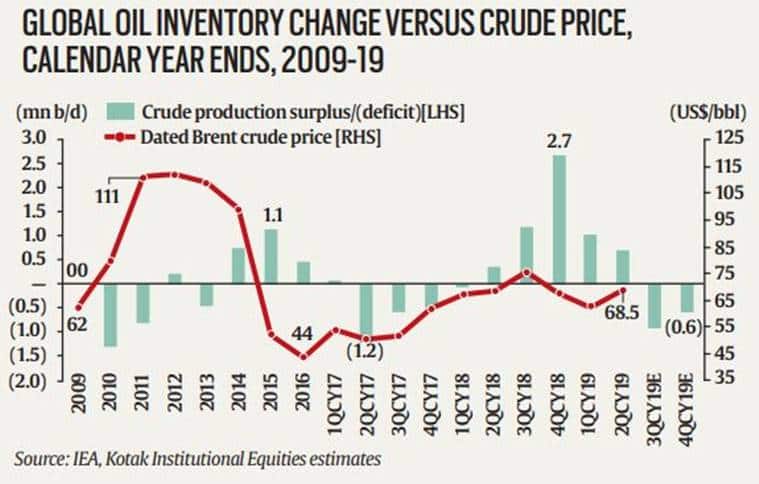 India imports 80 per cent of the oil it consumes, which means there are multiple ways in which the country will be impacted by this disruption.

The first issue is supply. India is already trying to make up for the loss of supply from Iran after US-imposed sanctions. After Iraq, Saudi Arabia is India’s second-largest supplier of crude oil — it accounts for almost 17 per cent of the country’s imports. Although Saudi Arabia has assured that there will be no loss of supply, if the process of restoration takes more time than anticipated, India would have to look for alternatives. This may not be easy since the global supply has been fairly volatile because of disruptions in some of the other big suppliers such as Venezuela, Libya and Nigeria.

A hit on prices may then follow. According to Madan Sabnavis of Care Ratings, India is expected to import 1.6 billion barrels of crude oil in the current financial year. So an increase in oil prices by just one dollar essentially means an increase of $1.6 billion in the import bill. That’s an additional Rs 11,500 crore at the current exchange rate. But supply constraints and rising oil prices would mean that the rupee will weaken further against the dollar — that’s because, as the dollar prices of crude oil rise, India would need to buy more dollars for the same amount of oil, thus depreciating the value of the rupee vis-à-vis the dollar.

As such, rising oil prices will worsen the Indian government’s fiscal balance. Moreover, higher crude oil prices would also lead to higher domestic oil prices, which, in turn, will further depress the demand for all things, especially those that use oil as the primary input — say, cars. This dip in consumption demand, which is already under strain as the recent growth slowdown has shown, would likely mean lower economic activity and consequently lower revenues for the government.

To the extent that the current crisis is contained, the damage would be limited — but an escalation by President Trump could exacerbate worries.