Healthcare in India: rarely an election issue, despite limited access

The absence of a positive experience with public healthcare not only pushes people towards private healthcare facilities, but also pushes the issue of health out of public political considerations. A patient is shifted from a Covid-19 ward to a general ward of Civil Hospital in Asarwa. (Express Photo: Nirmal Harindran, File)

In India, health-related public policies and healthcare infrastructure have often been a matter of discussion among policymakers. Yet, they rarely become a political issue. However, it would be a mistake to imagine that citizens do not care about health facilities. Years before the ongoing pandemic drew attention to these issues, a study (‘State of Democracy in South Asia (SDSA)–Round 3’) by Lokniti-CSDS in 2019 found that people expect the government to take maximum responsibility for providing basic medical care (Chart 1). But when it comes to voting, health never becomes an electoral issue for voters; nor do political parties generally focus on health infrastructure in their manifesto or campaign.

In the serval rounds of post-election studies (national and state) by Lokniti-CSDS, less than 1% of voters have said health was their consideration while voting. It was assumed that during the current pandemic, voters would prioritise health as an election issue — but this has not been the case. The Bihar Assembly elections were held just after the first wave of Covid-19. During the post-election survey, less than 1% of voters considered health an issue while voting, which was not very different from the finding of the last post-election survey in Bihar (2015). In early 2021, when India faced the second wave, elections were held in four states. Here, too, less than 1% of the voters considered health an election issue (Chart 2). 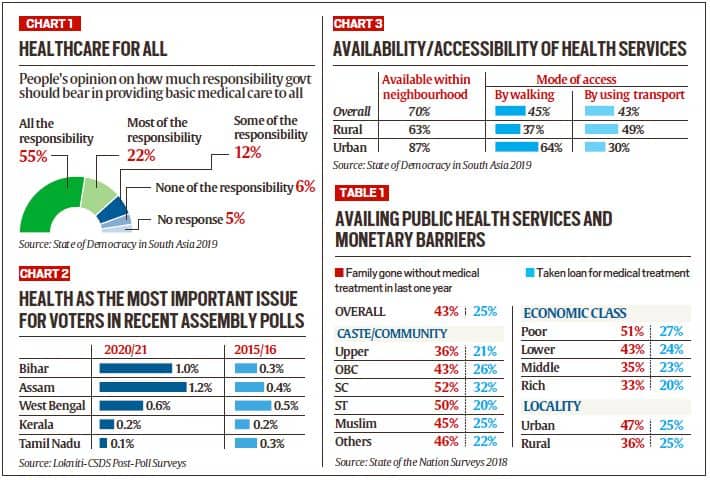 In a study conducted between elections by Lokniti-CSDS in collaboration with Azim Premji University during 2016-19, 30% of the surveyed people shared negative experiences in availing public healthcare services. It was more so for people from the marginal sections, who avoid getting treated, sometimes due to lack of infrastructural and monetary resources.

In the ‘State of the Nation Survey (SONS)’, conducted in 2018 by Lokniti-CSDS, people were asked if they have ever taken a loan for medical treatment. One-fourth (25%) confirmed taking a loan, and this proportion is higher among people belonging to the Scheduled Castes and the poor. Scarcity of funds further discouraged them from taking medical treatment: 43% of the respondents said they or someone in their family went without medical treatment. This trend was mainly observed among people from Scheduled Castes and Scheduled Tribes — more than half the respondents in these sections said so. At the same time, 47% of people living in rural areas said that they went without treatment (Table 1).

These findings indicate that the healthcare system in India needs to be made accessible to the needy and people living on the margins of society. The absence of a positive experience with public healthcare not only pushes people towards private healthcare facilities, but also pushes the issue of health out of public political considerations.

Uttarakhand cracks down on tourists ‘disturbing sanctity of religious places’