Germany election results: Here is a summary of the most likely coalitions and some of the compromises that will be necessary to reach agreement. Front from left, Franziska Giffey, top candidate of the SPD for Mayor of the German city of Berlin, Olaf Scholz, top candidate for chancellor of the Social Democratic Party (SPD), and Manuela Schwesig, member of the SPD and governor of the German state of Mecklenburg-Western Pomerania, pose with flowers at the party's headquarter in Berlin, Germany, Monday, Sept. 27, 2021. (AP)

Germany faces months of tough negotiations to form a coalition government after the federal election on Sunday, with three parties needing to team up to clear the threshold of 50% of all seats in the Bundestag after the vote.

Here is a summary of the most likely coalitions and some of the compromises that will be necessary to reach agreement.

After Olaf Scholz’s centre-left Social Democrats came first, they said they would seek to form a coalition with the Greens and the FDP.

The SPD and the Greens, which ruled together from 1998 to 2005 under Chancellor Gerhard Schroeder, broadly agree on environment policy and on raising taxes and social spending, though the Greens are far more hawkish on Russia policy.But if the SPD is to reclaim the chancellery for the first time since 2005 they will also need to get the liberal Free Democrats on board to form a “traffic light” coalition, so-called due to the party colours of red, green and yellow.

FDP leader Christian Lindner has sounded cool on the possibility, saying legalising cannabis is about the only thing his party could easily agree with the SPD and Greens.

While the liberals are far to the right of the SPD and Greens on economics, they might compromise if it means they win control of the Finance Ministry.

An Expert Explains |The Angela Merkel era and India

Despite coming second, Christian Democrat candidate Armin Laschet said he could still try to form a government with the FDP and the Greens.

“Christian Liberal” governments ran Germany for much of the post-war era, and the two are closely allied on economic policy.

But the two parties do not have enough seats to govern alone. So they could try to form a Jamaica coalition with the Greens – the parties’ colours of black, yellow and green make up that country’s flag. 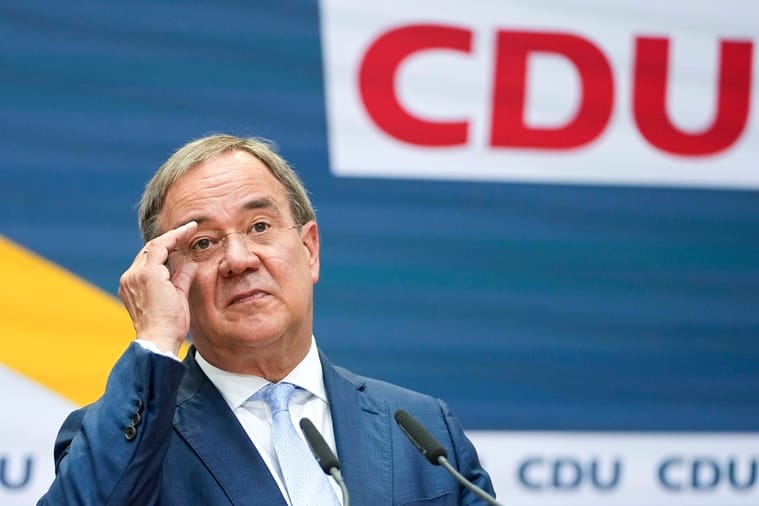 Candidate for chancellor of the Christian Union parties block Armin Laschet briefs the media after a leaders meeting of his Christian Democratic Union party CDU at the headquarters in Berlin, Monday, Sept. 27, 2021. (AP)

However, such an alliance will also not be easy: liberal leader Christian Lindner unexpectedly pulled out of talks on forming a Jamaica coalition in 2017.

On environmental policy the Greens and the FDP are far apart, while both the conservatives and the liberals are significantly more hawkish on defence spending.

The SPD has been a reluctant junior partner to Merkel’s conservatives for 12 of the past 16 years. They have ruled out working together again, but said the same at the election in 2017, and ended up agreeing when other options failed.

Before the election, the conservatives raised the spectre of a “red-red-green” coalition between the SPD, Greens and the hard-left Linke party, heirs to the Communist Party that ruled East Germany. But the three parties did not garner enough seats to form a coalition.

The Linke fell below the 5% threshold needed to enter parliament, but still managed to win three constituencies directly, so it will get its full 4.9% of the seats although that is not enough to put a left-wing coalition in power.

Deepika Padukone’s monochrome pics capture ‘before and after’, fans say ‘that smile has my heart’