On Tuesday, the government of Prime Minister Ranil Wickremesinghe finalised an agreement to sell an 80% stake of the Hambantota Port's operations for $1.1 billion to China Merchant Ports Holding Company Ltd, which also has the contract for the Colombo Port. 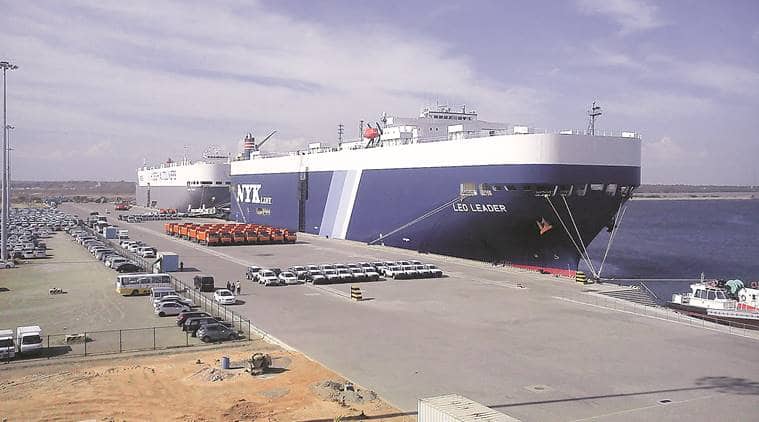 Former President Mahinda Rajapakse called the Hambantota Port the fruit of the ‘total commitment of the peoples of China and Sri Lanka’. (Wikipedia Photo)

Inaugurating the first phase of the Magumpura Mahinda Rajapakse Port at Hambantota on his birthday on November 18, 2010, Rajapakse, who was then the President of Sri Lanka, said the port, named after him, symbolised Sri Lanka’s aspiration to be part of Asia’s emergence.

“We have shown this by completing this stage of the Magumpura Port even before its target date. This was possible due to the total commitment of the people of China and Sri Lanka. The people of Sri Lanka offer their warmest gratitude to the people and government of China,” Rajapakse said.

On Tuesday, the government of Prime Minister Ranil Wickremesinghe finalised an agreement to sell an 80% stake in the port’s operations for $ 1.1 billion to China Merchant Ports Holding Company Ltd, which also has the contract for the Colombo Port. Sri Lanka took this step to service the debt on the loan it took from Exim Bank China to build the port, the repayment amounting to SL Rs 9.1 billion ($ 60 million) annually. The cabinet paper on the agreement will be discussed in Parliament on Friday, and the agreement is expected to be signed on July 29.

Since mid-2016, there has been both domestic and foreign opposition, notably from India, to the plan. New Delhi pushed hard to prevent it. In the event, the agreement is a drawn down version of the original December 8, 2016 Framework Agreement, with written-in terms to address India’s security concerns. While India has not commented on the new agreement, the domestic protests continue. From Tuesday through Thursday, port workers and Ceylon Petroleum workers have struck work to protest the sale of Hambantota to the Chinese, as well as the Trincomalee agreement with India.

At the entrance to the port in Hambantota, 220 km south of Colombo, is a modernist concrete sculpture of a ship, on which is engraved a long mission statement that ends: “…constructed in line with the crusade of making Sri Lanka the miracle of South Asia”.

Six years after its inauguration, Sri Lanka’s new government would declare Hambantota Port a “white elephant” that was bleeding the nation and adding to its huge foreign debt, a large portion of it owed to China as repayment of loans for infrastructure projects launched by the Rajapakse government in 2008-09, as the civil war drew to a close.

For the $ 1.5 billion Hambantota Port, 85% of the finances came as loan from China’s Exim Bank, at an interest of 6.5%. The rest came from the Sri Lankan government, which was borrowing heavily from other sources. The first phase, with its four berths and buildings, cost about $ 650 million. The port began commercial operations in November 2011, and to be able to repay, it needed to start showing results by 2013. By 2016-end, however, its cumulative losses were estimated at over SL Rs 450 billion ($ 3 billion).

Not far from Hambantota, in the coastal town of Mattala, is a second giant lossmaking project — a $ 209 million international airport, also named after Rajapakse. It sprawls over 2,000 ha, and has a 3,500 m long runway — the only airport in Sri Lanka where an Airbus A380, the world’s largest passenger aircraft, can land. It was built by the Chinese, with the Exim Bank of China lending $ 190 million.

The airport opened on March 18, 2013. At the moment, one international carrier flies to Dubai from the airport, while a domestic airline connects to Colombo.

Under the December 2016 Framework Agreement, China Merchants Port Holdings was to get 80% of the stake in Hambantota Port for 99 years. The Chinese state-run firm was to invest $ 1.08 billion in the development of the port and associated activities. For this purpose, a joint venture was to be created with the Sri Lanka Ports Authority. The proposal created an uproar in Sri Lanka, with Rajapakse, who had cosied up to China during his two terms in office, surprisingly leading the attack. Under fire specifically was a related land deal under which 50 sq km (some 15,000 acres) was to be given to Chinese companies to set up factories in a special economic zone.

Under the new agreement, the deal is now a Public Private Partnership, in which SLPA is the public equity partner, and the Chinese investors are private partners. The SLPA will incorporate two special purpose vehicles as private limited companies. All land belonging to the port will be transferred to these two companies. One company, in which SLPA will hold 50.7% stake and China Merchants Port, 49.3%, will be in charge of administration; the second, in which SLPA’s share will be 15% and the Chinese company’s 85%, will look after port operations.

The Chinese company has agreed to sell to SLPA 20% of its stake in 10 years. The deal is for 99 years.

Of interest to India and other powers jostling with China in the region, are two clauses in the 121-page MoU, which were not there in the earlier agreement:

“…It is further agreed and understood [by the parties] that the sole authority for granting all requisite permissions, clearances, and approvals for bringing in or berthing warships, submarines or storing, warehousing of any military equipment and machinery, installation of communication networks, facilities, shall only be with GoSL.

When Wickremesinghe took office in August 2015, six months after Sri Lanka voted in President Maithripala Sirisena, it was expected that the duo would correct the China tilt in Sri Lanka’s foreign policy, and put relations with India on a firmer footing.

There is some disappointment in the Indian establishment that Wickremesinghe did not altogether cancel all the Chinese infrastructure projects, including the controversial offshore Colombo Port city deal. But Wickremesinghe has said he would do what is in Sri Lanka’s “best interests”, and has been clear that in order to energise the Sri Lankan economy, he needs a country with deep pockets. China has those pockets, not India. Sri Lanka believes it stands to benefit from One Belt One Road. Wickremesinghe’s visit to India earlier this year sought to clear the air and create some balance, with an MoU on the development of Trincomalee harbour. And there has been some talk of offering the non-starter Mattala airport to India for development.

But ordinary Sri Lankans are enthused neither by India nor by China. The sardonic joke circulating in Colombo is that these two have already got a port each, the Japanese should now be given Oluvil in the east, the British should get back the plantations, and “the rest & residue” should be distributed to the Americans, and whoever else is interested.

Seeing red: why is tomato on fire?