Explained: What Facebook’s Ray-Ban Stories smart glasses do, and the concerns they raise

Facebook’s smart glasses will let users record the world around them, and take pictures. This is exactly what Snap’s Spectacles also let users do. 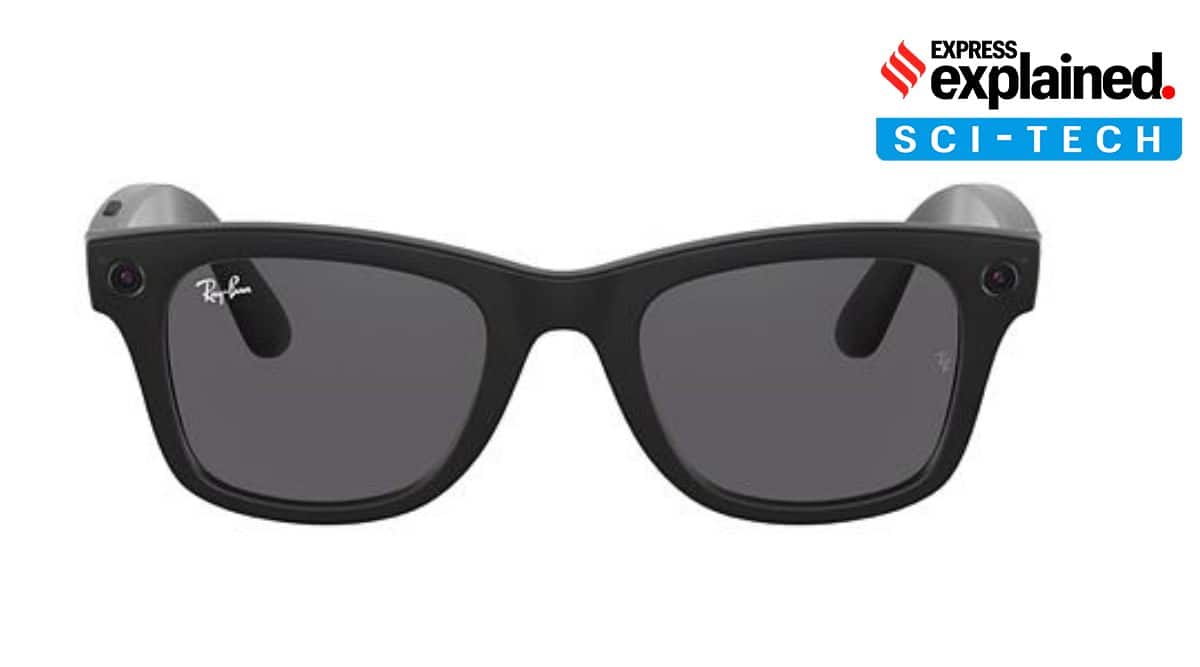 At first glance, these might seem like ordinary sunglasses, except that they come equipped with two 5MP cameras at the corners with an LED light near them. (Facebook via AP)

Ray-Ban Stories, Facebook’s first ‘smart glasses’ in partnership with Ray-Ban, are now official. While these are not the sophisticated AR-glasses that draw on Facebook’s Oculus, they certainly appear to be inspired by Snap’s (Snapchat’s parent company) Spectacles.

So what exactly do Ray-Ban Stories offer and how are they different? Let’s take a closer look.

What are Facebook Ray-Ban Stories? What exactly do these do?

Facebook’s first ‘smart’ glasses capitalise on the iconic Wayfarer design that has been associated with the iconic eyewear brand. They also comes in two other designs: round and meteor.

At first glance, these might seem like ordinary sunglasses, except that they come equipped with two 5MP cameras at the corners with an LED light near them. The white LED light turns on to let others know you are recording them.

Facebook’s smart glasses will let users record the world around them, and take pictures. This is exactly what Snap’s Spectacles also let users do. For now, users can record 30-second videos or take photos by using either the capture button or going hands-free with Facebook Assistant voice commands.

Facebook’s glasses also come with built-in “open-ear speakers” and a three-microphone audio array, which will ensure that users can take calls as well. Facebook says it is using “beamforming technology” and “a background noise suppression algorithm” to ensure an “enhanced calling experience” just like what one gets on headphones.

What will the smart glasses cost? Where will they be available?

Ray-Ban Stories will start at $299. They will be available for purchase in 20 style combinations online and in select retail stores. The smart glasses are launching in the US, Australia, Canada, Ireland, Italy, and the UK for now.

So how do Ray-Ban Stories work?

Users have to pair these smart glasses with the Facebook View app. These will also support the Facebook Assistant so users can give commands like ‘Hey, Facebook record a video’ and carry out the task.

The glasses can pair with both iOS and Android devices. The assistant is currently available for English only.

Users will also have the option of saving the recording content to their phone’s camera roll and then editing there.

The smart glasses also come with a button to turn them off. They have a dedicated charging case and can be charged using a USB cable.

According to Facebook, these glasses can capture and sync up to 50 videos or up to 200 photos per full charge. Fully charged glasses will last up to 6 hours for moderate usage and up to 3 hours with continuous audio streaming and Facebook Assistant turned on.

Also in Explained |Why is the JioPhone Next delayed?

But what about Augmented Reality on these Ray-Ban Stories?

Ray-Ban Stories do not support Augmented Reality (AR), something which we’ve seen Google Glasses attempt to do in the past (unsuccessfully though). AR, which would allow these glasses to project digital content on the optics, is a lot more complicated.

In fact, Snapchat had shown its own AR glasses earlier this year, but these are limited to just developers for now and are not being sold to the general public. Snapchat’s AR glasses will let users experience the company’s AR filters in their real-life surroundings, even play AR games, based on the glimpse that the company had given.

And while Facebook has in the past said it plans to create its ‘AR’ glasses, it has also acknowledged the challenges of the technology. As Dr Nikhil Balram, CEO of Israeli-AR based firm Eyeway and former head of Google display, had told indianexpress.com, AR hardware has a lot of limitations. He had said that people want a “natural” experience when using AR glasses where the digital content and real-world are visible at the same time but cautioned that these true AR glasses of the future are still some time away.

This will be a major concern for most users. First, as some reviews have shown other people don’t really realise that the Ray-Ban Stories are recording, despite the LED light coming on. Also since the smart glasses look like any other Ray-Ban sunglasses, others might not always realise the user is wearing Facebook’s special version.

The glasses and their ease of use raise concerns on whether some users might rely on these to record confidential meetings, or even use them to just record others without consent and then use that footage for harassment. The potential for misuse is definitely there.

And, Facebook clearly knows that ‘privacy’ will be a much-asked question. In fact, the company has built a microsite designed to answer all questions around privacy and Ray-Ban Stories.

Facebook says the View app will let users customise their experience, and decide where they wish to import the photos, and videos captured with these. It says Ray-Ban Stories smart glasses collect data needed to make the glasses work and function, such as battery status, Facebook login details, and WiFi connectivity.

Users can opt-in to share additional data such as the number of photos taken, how long they spend taking videos. This setting can be changed at any time, according to the company.

The use of “Facebook Assistant” for voice command-powered capture “is totally optional,” according to the company. Users have the option to viewing and deleting these voice transcripts as well.

Using these will be an ad-free experience. There will be no ads on the View app either. Further, Facebook says it will not “use the content of your photos and videos for personalised ads.” But if you share this content with other apps, the terms and services of those apps will apply.

Facebook also says all photos and videos are encrypted on the smart glasses. The glasses can pair with only one account at a time. Also if you lose these sunglasses, which is fairly common for many people, “and someone tries to pair them with a new phone and Facebook account, any data, and media left on the glasses will be automatically deleted.” But there’s no feature in the Facebook View app to let users locate their lost glasses.

Don't miss |Explained: If the next iPhone has satellite connectivity, this is the tech Apple will use

It uses “machine learning and trained reviewers to process information to improve, troubleshoot, and train Facebook Assistant, and may share that information with certain third parties for product improvement.”

It “may also share such information for law enforcement purposes or as otherwise required by law.”

Facebook also says that any tampering with the glasses or attempts to “obscure or modify any of the features on the Glasses that signal to others that the Glasses are recording (including the external-facing LED light),” will be considered a violation of its terms and services.