ExplainSpeaking: How to read IMF’s latest GDP forecast for India

The International Monetary Fund's latest World Economic Outlook has rolled back growth prospects for the world and for India. What are the reasons, and how does the outlook differ for advanced and other economics? 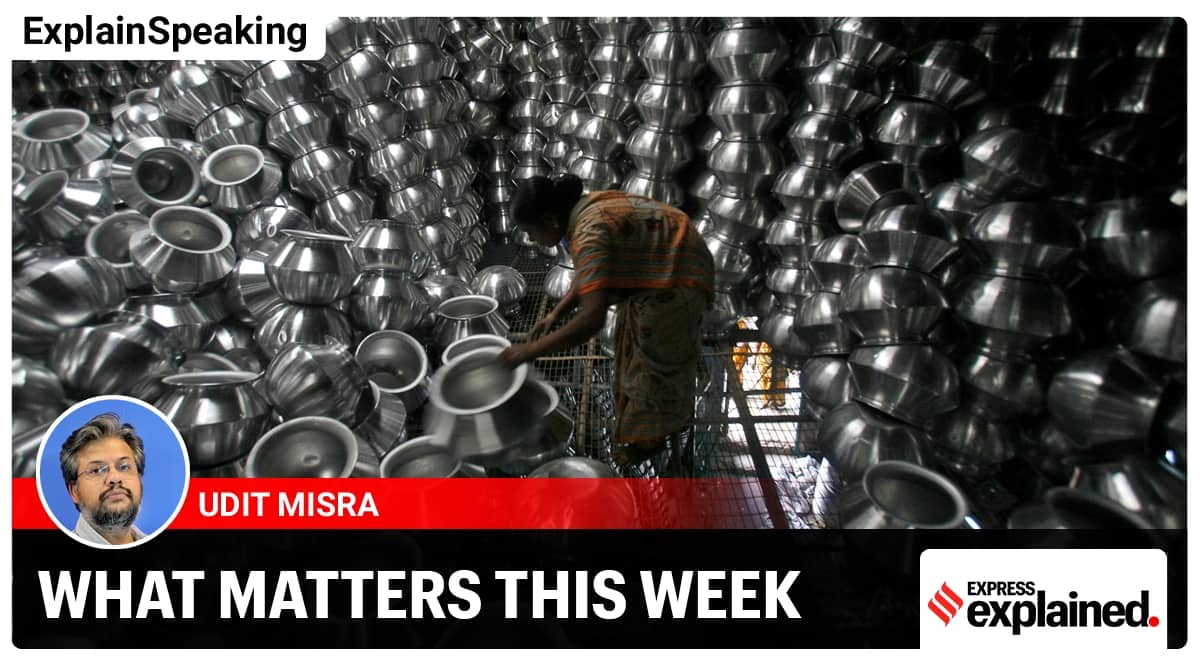 A worker checks aluminium utensils inside a factory on the outskirts of Agartala, Tripura. (Reuters/File)

Last week, the International Monetary Fund (IMF) released the first of its two annual World Economic Outlook (WEO) reports. Each year, the IMF releases two WEO reports, one each in April and October; it also provides “updates” to these two WEOs in January and July.

Here is ExplainSpeaking’s take on the last full WEO published in October last year. In the October outlook, the IMF was most concerned about the increasing inequality among nations. Essentially, it pointed to the “dangerous divergence in economic prospects” between advanced economies such as the US and emerging economies such as India. In particular, it had highlighted that employment growth was likely to lag the output recovery. This was crucial for countries such as India, which were already struggling to create jobs.

This time, predictably, the IMF’s focus has been on the impact of Russia’s invasion of Ukraine on global growth.

Let’s look at what the IMF forecasts for global growth before coming to India’s specific case.

As far as hard numbers are concerned, the IMF projects a sharp fall in the global economic growth rate. “Global growth is projected to slow from an estimated 6.1 per cent in 2021 to 3.6 per cent in 2022 and 2023. This is 0.8 and 0.2 percentage points lower for 2022 and 2023 than in the January World Economic Outlook Update,” it states. Worse still, beyond 2023, global growth is forecast to decelerate even more to about 3.3 per cent.

A deceleration in global growth dampens India’s growth prospects especially because it would lead to lower demand for Indian exports.

Again, much like the October 2021 WEO, IMF points out that this “drag on output is expected to be more salient in emerging market and developing economies”.

Figure 1.17 from the latest WEO brings this out. The first panel shows the output gap — that is the difference between the actual and potential GDP. As can be seen, on average this gap is higher for emerging economies such as India (IND in the chart) and especially for 2022-23.

The second and third panels forecast the output and employment losses, respectively, as of 2024 when compared to the pre-pandemic “trend”. These, too, underscore how emerging economies are more badly affected.

The first panel shows the output gap — that is the difference between the actual and potential GDP. The second and third panels forecast the output and employment losses, respectively, as of 2024 when compared to the pre-pandemic “trend”. (Source: IMF) 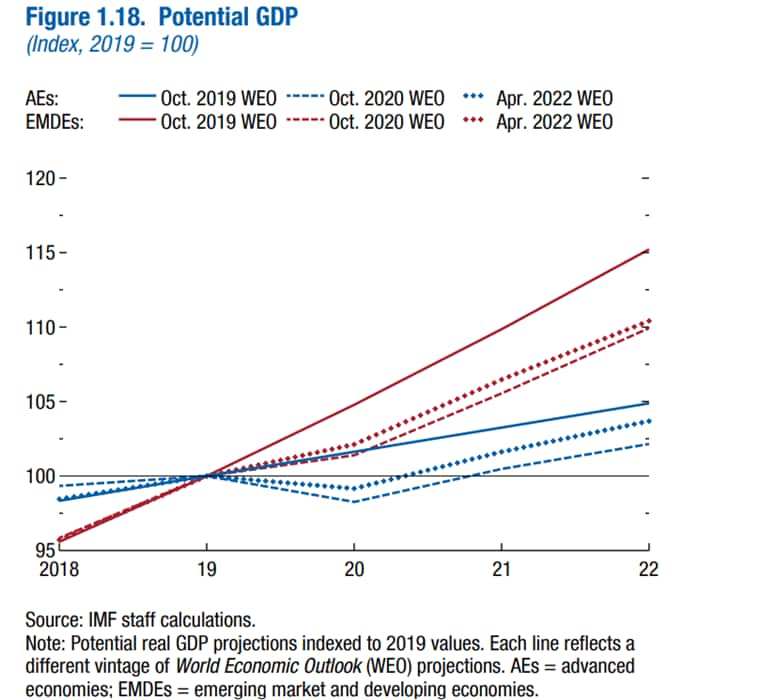 The solid lines map the pre-pandemic trend of GDP. The broken lines are the different projections based on how the economies recovered. (Source: IMF)

One last but important point is about inflation levels because faltering growth is not the only worry. Thanks to the disruptive impact of the war in Ukraine, prices of several commodities have skyrocketed, creating a massive surge in inflation.

“Inflation is expected to remain elevated for longer than in the previous forecast, driven by war-induced commodity price increases and broadening price pressures,” states the WEO.

Advertisement
Don't miss |Inflation will probably surprise us on the upside… could lead to higher interest rates: Prashant Jain

There are two ways to report the IMF’s latest forecast for India (see Table 1.1). 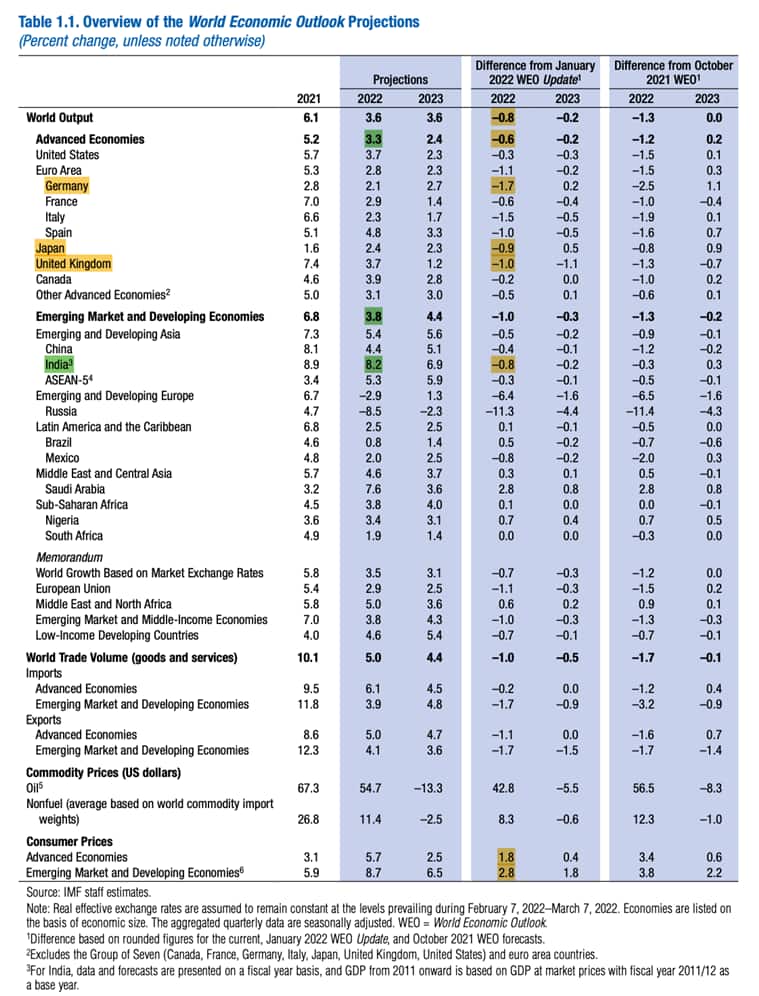 One way to look at India’s GDP forecast is to focus on how it has been revised down by 0.8 percentage points — highlighted in yellow — since the January update of WEO. (Source: IMF)

One way is to look at the expected GDP growth rate for 2022 and compare it globally. This is the approach the incumbent government and its supporters are likely to take. India is expected to grow at 8.2% (highlighted in green) in 2022 and this is by far the best growth rate across all the major economies in the world. It is more than double the average growth rate of both the advanced economies (3.3%) as well as the emerging economies (3.8%).

The other way to look at India’s GDP forecast — one that the government’s critics may choose to employ — is to focus on how it has been revised down by 0.8 percentage points — highlighted in yellow — since the January update of WEO. To be sure, several economies have suffered sharp downward revisions.

What is the right way to look at India’s GDP growth?

When it comes to economic growth, each country — to borrow a term from cricket — faces a different “required run rate”. In other words, the pace at which a country must grow depends entirely on how well off an average citizen of that country is. As such, while it appears that different countries are competing with each other, more often than not, the bigger truth is that each country is competing with its past self.

Table A brings out this point more clearly. Countries whose share of the global population far outstrips their share in global GDP — such as India and Nigeria — are the ones that face the highest required rate of GDP growth. (Source: IMF)