The State Department had designated Hamza as a global terrorist in 2017, and the United States had put a bounty of $1 million on his head. His last known public message was delivered in March 2018. 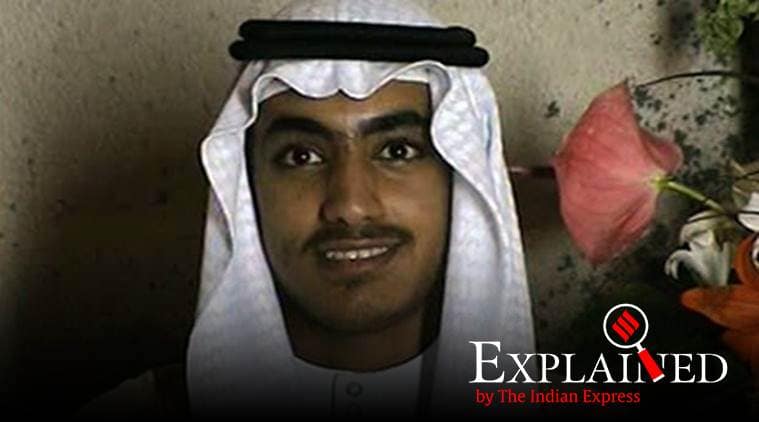 Hamza was thought to have been born in Jeddah, Saudi Arabia, the base of the Bin Laden family for many decades. The older relatives of Hamza and Osama still live there. (File)

President Donald Trump has confirmed that Hamza bin Laden, the son of Osama bin Laden, is dead. Who was Hamza, and how significant is his killing in “a United States counterterrorism operation in the Afghanistan/Pakistan region”?

Saturday’s White House statement described “Hamza bin Ladin” as a “high-ranking al-Qa’ida member and son of Usama bin Ladin”, who was “responsible for planning and dealing with various terrorist groups”. Hamza was believed to have been aged around 30, even though the United States State Department records two possible years of his birth — 1989 and 1986.

Hamza was thought to have been born in Jeddah, Saudi Arabia, the base of the Bin Laden family for many decades. The older relatives of Hamza and Osama still live there.

Hamza was the son of Khairiah Sabar, one of Osama’s three surviving wives who lived with him in secret in the infamous compound in Abbottabad, Pakistan.

Hamza was married to a daughter of al-Qaida leader Abdullah Ahmed Abdullah, and a video of his wedding was reported to have been found in the Abbottabad compound, where US Navy SEALs killed Osama in 2011. In an interview published in The Guardian in 2018, half-brothers of Osama claimed that Hamza was also married to the daughter of the Egyptian terrorist Mohammed Atta, the lead hijacker in the 9/11 attacks, who flew American Airlines Flight 11 into the North Tower of the World Trade Centre in New York City on September 11, 2001.

According to Western intelligence, Hamza hid out for several years after the 9/11 attacks in Iran, where he was protected by the regime in Tehran.

The State Department had designated Hamza as a global terrorist in 2017, and the United States had put a bounty of $1 million on his head. His last known public message was delivered in March 2018. He was stripped of Saudi Arabian citizenship earlier this year.

The killing of Hamza

In July this year, The New York Times and NBC News reported that Hamza bin Laden had been killed, quoting American intelligence officials. The NYT report said Hamza had died at some time over the preceding two years, and that the US had had a hand in his death. The reports were not confirmed by the United States at that time.

The confirmation finally came on Saturday, but the White House statement did not provide many details. There was no confirmation on which agency was responsible, even though media reports have said that it was likely a CIA operation rather than a United States military strike. The CIA did not comment immediately.

A Reuters report on Saturday said Hamza had been killed “months ago”, and that President Trump had been told about the success at that time, quoting an unnamed US official. An AP report quoted “a US official familiar with the case” as saying Hamza had been taken out at some point in the last 18 months.

There was no clarity on why the White House had decided to confirm the killing at this time — three days after the 18th anniversary of 9/11, in which nearly 3,000 people were killed in New York, Washington and Pennsylvania.

The al-Qaida has of late been eclipsed by other jihadist groups, including the Islamic State, and Hamza was widely believed to be working towards a resurgence of the terrorist network that his father had founded.

Back in July, Peter Bergen, the director of the international security programme at the New America foundation, had told The Guardian in an interview: “[Al-qaida was] clearly grooming him to be a next generation successor. [Official leader] Ayman al-Zawahiri hasn’t been a particularly effective leader. He’s got a sort of charisma deficit. And they were trying to put this guy (Hamza) forward.”

The White House statement said Hamza’s killing “deprives al-Qa’ida of important leadership skills and the symbolic connection to his father” and “undermines important operational activities of the group”.

Hamza has featured in al-Qaida videos since the time he was a teenager, and is believed to have been mentored by al-Zawahiri’s deputy, Abu al-Khayr al-Masri in the years after the 9/11 attacks. Al-Masri was reported to have been killed in Syria in 2017 while fighting for the Salafist jihadist al-Nusra Front, also known as al-Qaeda in Syria or al-Qaeda in the Levant.

Simple exercises to strenghten your lower back