Pork output, which has fallen sharply in the past 6 months, contributes 1% of China's GDP -- from an Indian perspective, in absolute numbers, that's roughly 70% of what the construction sector contributed to India's GDP. 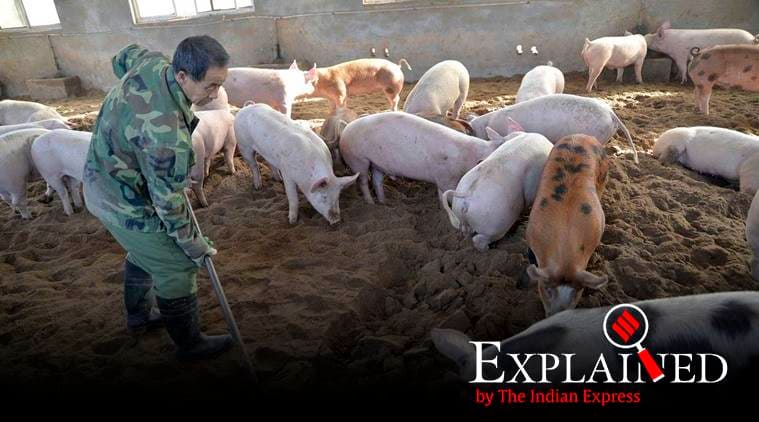 China is the world’s largest pork producer and consumer, a sharp rise in prices has ramifications beyond China. (Chinatopix via AP)

Amid all-round trade tensions among countries, the unending twists and turns of Brexit, geopolitical strains in West Asia, and the broad-based slowdown in the global economy, it may surprise many that rising pork prices in China have emerged a potent threat to the growth momentum of the world’s second-largest economy. What’s more, because China is the world’s largest pork producer and consumer, a sharp rise in prices – pork prices are expected to scale record levels by the end of the calendar year – has ramifications beyond China.

Why are Chinese pork prices rising?

In short: because of the rampant spread of African Swine Fever (ASF). As a result, pork prices have already reached RMB 56/kg (Rs 560/kg) last week – significantly higher than the last recorded peak of RMB 30/kg in May 2016. A research note by Nomura claims that pork prices will continue to rise in the coming months, especially since the Chinese celebrate their Lunar New Year holidays in January, and could rise as high as RMB 75/kg in the first half of the next year.

How is this affecting China?

At the macro level, the swine fever affliction has reduced supply, thus damaging growth, and also raised prices, thus increasing inflation – neither trend is conducive for an economy trying to regain its status as the world’s fastest-growing major economy.

According to Nomura, year-on-year pork output growth contracted by 6 per cent in Q2 (Apr-Jun), 42 per cent in Q3 (Jul-Sept) and could contract further by 60 per cent in Q4 (Oct-Dec). Given the fact pork production accounts for around 1 per cent of China’s GDP – in 2018, China’s GDP was $13.6 trillion in current prices and 1 per cent of that would be around Rs 9,52,000 crore or approximately 70% of what the construction sector contributed to India’s GDP – such a massive rate of contraction is bound to drag down growth.

Worse still, even as growth slides, food inflation will rise. Nomura researchers expect headline retail inflation to rise to 3.3 per cent in October from 3 per cent in September. They further expect it to rise to 4 per cent by January 2020.

The combined effect of these two factors is that the People’s Bank of China – which is the country’s central bank like the RBI is for India – is likely to feel constrained to cut interest rates in the economy with an aim to boost growth. That’s because the inflation will peg back their freedom to give a boost.

How is this affecting other countries?

A sharp cut in pork and hog population has hurt the allied industries. For instance, China is no longer importing as much soybean and corn which are used as pig feed. Soybean is considered relatively less replaceable because it provides protein to pigs and without it in the diet, the pigs grow at a slower pace, thus elongating the pig-farming cycle and resulting in higher costs.

On the other hand, pork imports by volume have surged by 40 per cent between January and August. But given the widespread scourge of ASF, pork farmers are unwilling to add supply.

At the same time, demand (both domestic and import) for alternate meats such as chicken has gone up. According to official data, price inflation rose to 14.7%, 18.8% and 15.9% y-o-y in September for poultry, beef and lamb respectively.