Explained: Why political parties in Maldives are pushing back against ‘India Out’ protests

The ‘India Out’ campaign started sometime in 2020 as on-ground protests in the Maldives and later spread widely across social media platforms using the phrase with a related hashtag. 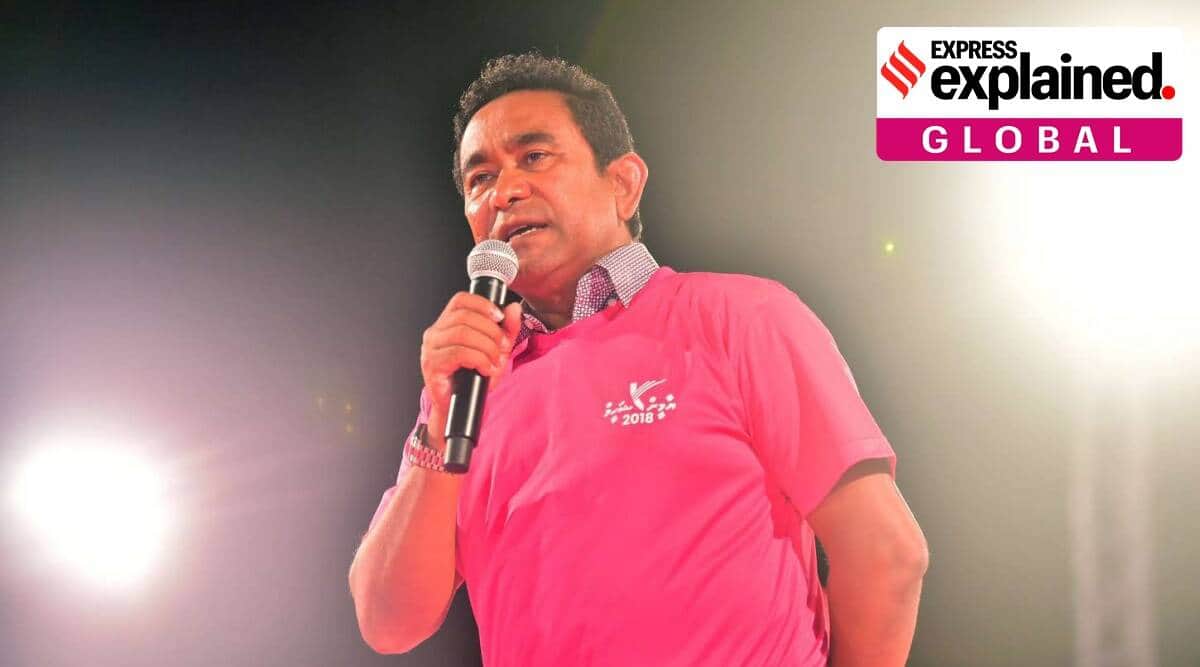 Anti-India protests have been going on in the Maldives for weeks now, and the acquittal of former president Abdulla Yameen Abdul Gayyoom has only intensified these. Yameen’s acquittal was expected to impact Maldives-India relations, particularly in context of his open support for these protests, that have been occurring under the ‘India Out’ movement.

India’s Ministry of External Affairs, said at a briefing on January 6, that “India’s relations with the Maldives are time-tested, close and multi-faceted… The mutually beneficial nature of this partnership has been affirmed by the Government of Maldives. India remains committed to deepening its traditionally friendly relationship with the Maldives.”

The ‘India Out’ campaign started sometime in 2020 as on-ground protests in the Maldives and later spread widely across social media platforms using the phrase with a related hashtag. During an interview with indianexpress.com in July last year, Shifxan Ahmed, co-founder of Maldivian news outlet Dhiyares, who has been active in the campaign, had told indianexpress.com: “We are just protesting military presence in the country. We are not calling for a violent clash against India or Indians in Maldives.”

“The ‘India Out’ campaign has become more politically active because now they have a leader, a strong face, with Yameen. That wasn’t there before. Now it is no longer a civil society movement. It is definitely a political movement,” Dr. Gulbin Sultana, a research analyst at the Manohar Parrikar Institute for Defence Studies and Analyses, whose area of research includes the Maldives, had told indianexpress.com during an interview.

While President Yameen’s Progressive Party (PPM) has been engaged in encouraging these protests through speeches and their social media presence, this past week, several of Maldives’ major political parties came out with statements addressing these protests targeting India and what the protesters call Indian military presence in the country.

But the presence of the Indian officials whom supporters of this movement object to, predate 2018 when President Ibrahim Mohamed Solih assumed office, whose ruling party, the Maldivian Democratic Party (MDP), they accuse of having warm relations with India. Yameen served as president from 2013 to 2018. One of Maldives’ major political parties, the Adhaalath Party, hit out at President Yameen, calling the protests a “political, motivated campaign led by him to manipulate the public mindset”, labeling it “a stunt”. The “Adhaalath Party condemns the efforts undertaken by a political party to incite hatred in the people’s hearts towards neighbouring and global partners that are assisting in the growth and development of the country,” the statement said.

A statement issued by the Jumhooree Party, one of the largest opposition parties in the Maldives, last week said it “does not believe there is any legal ground to decide the existence of Indian military presence in Maldives”. This implied that the presence of military personnel in a country under agreed grounds was not unusual. “The majority of the countries in the world have accepted this practice, on an international, regional and mutual level. It is a common political stunt by oppositions to imply such “unarmed” military personnel on official duties as the presence of foreign “military” in the country,” the statement said.

During a recent interview with a local Maldivian news publication, Yameen’s half-brother, former President Maumoon Abdul Gayoom, also the founder of the Maldives Reform Movement (MRM) party, also addressed this ongoing issue. “In my opinion, one should not campaign against any neighbouring/friendly nation. not just India. Be it Pakistan, Bangladesh or Egypt, one should not run a campaign belittling any country. This is not a policy that will be accepted internationally,” said Maumoon. “It’s not just India. We should not do it against any other country.”

Domestic developments in the Maldives

All of this has to be viewed in context of domestic developments in the Maldives. The country will be holding its presidential and parliamentary elections in 2024, and the Maldives is a strategically important country, not just for its South Asian neighbours, but also China, that has been attempting to exert its dominance in the region and the wider Indian Ocean. The Yameen government and the PPM have been accused by the opposition of being pro-China and many policies during Yameen’s tenure did indicate his inclination towards China and Saudi Arabia.

In mid-December, a photograph of supporters of the ‘India Out’ campaign outside the door of the Chinese embassy in the Maldives went viral, where these supporters were wearing their trademark red T-shirts, emblazoned with the words ‘INDIA OUT’.

A day later, the Chinese embassy used their official Twitter account to address the criticism and said they “always follow the principle of non-interference into the internal affairs of other countries.”

Over the past few years, India has made several investments worth millions of dollars in the Maldives, becoming one of the largest investors in the country. Should the PPM come to power in the upcoming elections, they may not be able to engage in a repeat of what Yameen did during his last tenure, abruptly pulling out of agreements and paying financial compensation, because the amount is so much larger this time, experts believe. “Ultimately the Maldives does need assistance from India. It is not a very big power in the region and India is an important country,” Dr. Sultana had told indianexpress.com.

This may also be a concern domestically among politicians in the Maldives, regardless of the stance they have with regard to the Solih government. Some indication could be found in the Jumhooree Party’s statement on this issue: “Jumhooree Party believes that the best and direct path to ensure the Independence and Sovereignty of Maldives is to maintain good relations in the international arena; since the country has limited resources and highly relies on foreign import. In this regard, the Jumhooree Party believes it is a huge injustice towards the citizens of both countries to demand “India-Out” towards a neighbouring and long lasting ally.”