Explained: Why are people using #ZimbabweanRightsMatter in an online campaign?

At least 60 protesters, including 2020 Booker Prize long-listed novelist Tsitsi Dangarembga, were arrested by law enforcement authorities for participating in street protests held in the capital city of Harare last Friday. 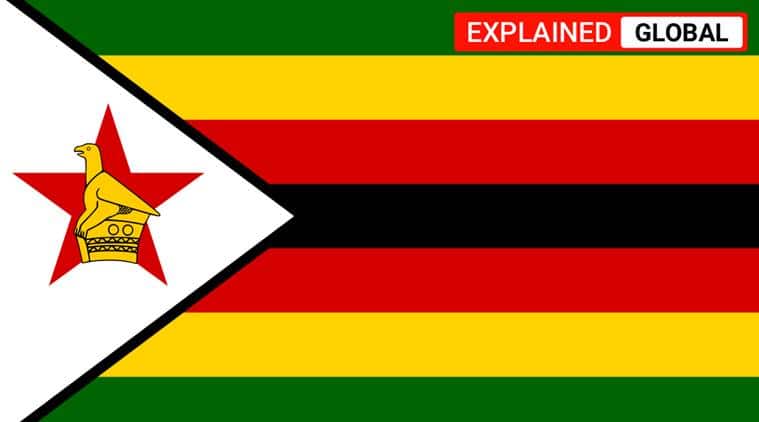 More than 700,000 posts have been shared with the hashtag #ZimbabweanRightsMatter demanding the release of those arrested and condemning the President Emmerson Mnangagwa-led government for stifling dissent.

Days after the Zimbabwean administration thwarted a peaceful street protest against economic turmoil and human rights violations by arresting scores of activists, opposition leaders and journalists, the people’s movement shifted online — with a hashtag inspired by the global #BlackLivesMatter campaign.

More than 700,000 posts have been shared with the hashtag #ZimbabweanRightsMatter demanding the release of those arrested and condemning the President Emmerson Mnangagwa-led government for stifling dissent.

Meanwhile, in a public address beamed on television screens across Zimbabwe Tuesday, Mnangagwa called the opposition political parties “terrorist grouplings” and accused them of working with foreigners to topple his administration.

“The bad apples that have attempted to divide our people and to weaken our systems will be flushed out, Good shall triumph over evil,” the 77-year-old President said.

It was on July 31 that Mnangagwa had unleashed a legion of heavily armed soldiers and police on the streets of capital city Harare when hundreds of activists and opposition leaders were set to stage a peaceful protest against the ongoing economic crisis and human rights abuses in the country.

At least 60 protesters, including 2020 Booker Prize long-listed novelist Tsitsi Dangarembga, were arrested by law enforcement authorities for participating in the protest, according to a Bloomberg report. According to local media reports, several of the unarmed protesters were tortured by the police and soldiers.

Arrested! At Borrowdale. Ope it will be OK

What led to the online and offline protests in Zimbabwe?

The anti-government demonstration, slated to take place on July 31, was organised to protest against the collapse of the Zimbabwean economy as well as the wave of arrests of critics and opposition leaders that took place after Mnangagwa came to power in 2018.

After Mnangagwa replaced the country’s former strongman Robert Mugabe following a military takeover in 2017, he vowed to undo the damage that had been done to Zimbabwe’s economy by the previous regime. However, the Mnangagwa administration failed to deliver.

Two-and-a-half years later, rampant corruption and inflation of over 700 per cent has strangled the economy further. According to the World Food Programme, around 60 per cent of the population — amounting to approximately 8.6 million people — will be food insecure by the end of the year because of the “the combined effects of drought, economic recession and the pandemic”.

After 37 years of authoritarian rule under Mugabe, Mnangagwa had also vowed a “new democracy”. But after coming to power, he went back on his word and began his reign of repression.

According to a coalition of Zimbabwean rights groups, the number of critics of the government charged with treason within the first 21 months of his term far exceeded those arrested during Mugabe’s three decades in office.

The recent spate of protests can be traced back to May when three female opposition activists were abducted, attacked and sexually assaulted by a group of government personnel in plainclothes, the New York Times reported.

Last month, the arrests of investigative journalist Hopewell Chin’ono and leader of the opposition Transform Zimbabwe Party Jacob Ngarivhume sparked outrage among civil society in the country. Both men were prosecuted for alleged “public incitement to violence”.

Chin’ono had recently exposed a corrupt government scheme involving the procurement of Covid-19 supplies by the health ministry. Meanwhile, Ngarivhume had called for street rallies against corruption across the country on July 31.

When the protest was stalled by the Mnangagwa administration, opposition leaders, activists and members of civil society took to social media to condemn the arrests and to demand justice using the hashtag #ZimbabweanRightsMatter. The campaign borrows from the #BlackLivesMatter movement, which took centre-stage globally following the custodial killing of George Floyd in Minneapolis, this May.

What was the government’s response to the protests?

Once the government caught wind of the protest being planned for July 31, its response was quick and fierce. The day before the demonstration, soldiers and anti-riot police were deployed at checkpoints across Harare to enforce a ban on mass gatherings, citing the ongoing Covid-19 pandemic.

“All security arms of government are on full alert and will deal decisively with any individuals or groups fomenting violence and sending threats or provocative messages through the social media or any other means,” an official statement from the police read.

However, critics of the Mnangagwa-led government have said that the administration is using the coronavirus pandemic as an excuse to curb freedom of expression and stifle dissent. Last week, the country’s president claimed that the demonstration would constitute an “insurrection” by the opposition, Reuters reported.

Last Friday, the streets of Harare were largely deserted apart from a few small rallies scattered across the city. Small groups of protesters were seen carrying  cardboard signs, demanding the release of Chin’ono and Ngarivhume. Among them was 61-year-old Zimbabwean writer Tsitsi Dangarembga. She was arrested and later released on bail.

What has been the global response to the protests in Zimbabwe?

Politicians, celebrities and other public figures from across the world have condemned the government crackdown on critics and activists in Zimbabwe. Responding to the violence and arrests in the country, South African politician Julius Malema urged the South African government to shut down the embassy of Zimbabwe in Pretoria.

The United Kingdom Ambassador to Zimbabwe Melanie Robinson too, has condemned the recent arrests in the country. “Very concerned about reports of abductions, arrests and threats targeting those exercising constitutional rights. Freedom of expression is vital even in times of COVID19, with social distancing observed,” she tweeted on July 31.

South African singer Kiernan Forbes, popularly known as AKA, was one of the first celebrities to tweet about the crisis. He earlier shared a picture of himself with the Zimbabwean flag draped over his shoulders. American celebrities, including hip hop artist Ice Cube and Tinashe, have also voiced their concerns over the human rights violations taking place in the country.

I would say, “I’m praying for you” … but that’s a bit over done, I’d rather just say, you’re on my mind and I hope you will be victorious soon. ✊🏽 🇿🇼 pic.twitter.com/utzSyTmWti

“Fadzayi, Tsitsi, Julie, Terrence, Loveridge, and all the others in Zimbabwe’s protest may God give you strength and courage in your pursuit of freedom. #ZimbabweanLivesMatter,” former president of Liberia Ellen Johnson Sirleaf wrote on Twitter.

The recent #ZimbabweanLivesMatter campaign is not the first time that members of civil society have used social media to protest against the government. Even earlier, the hashtag #ZanuPFMustGo was used by activists to voice their dissent and demand the removal of the Mnangagwa-led Zimbabwe African National Union – Patriotic Front (ZANU-PF).

CLAT postponed again, new dates not out yet