Explained: Car sales down, what does this mean for the economy?

Not just cars, sales of trucks, tractors and motorcycles too are down. The NBFC crisis has caused a liquidity crunch, and customers are postponing the decision to buy. What does this mean for the economy? 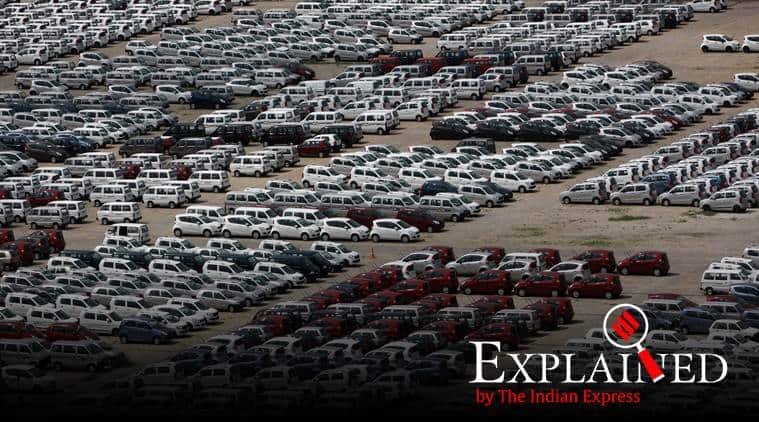 The sharp decline in sales numbers of the leading manufacturer shows the decline in consumer sentiment and indicates an overall slowdown in the economy. (Express photo)

Leading automobile manufacturers announced a sharp decline of up to 50 per cent in their domestic sales in July with the market leader Maruti Suzuki reporting a 36.2 per cent drop in sales during the month. Hit by the liquidity crunch for non-banking financial companies (NBFCs) and a dip in consumer sentiment, July became the twelfth out of the last 13 months in which the auto sector has seen a decline in domestic sales.

Manufacturers are now going for cuts in production, and the industry that is one of the biggest job creators in the country is staring at a deep-rooted slowdown and job losses across its value chain.

Where is the decline?

Even the tractor industry, which had bucked the broader downturn in the auto sector to post a third consecutive year of double digit growth up until March 2019, has seen a steady slide since then, recording the biggest monthly fall in production in June 2019.

Tractor sales have consistently fallen since March 2019, amidst weak farm sentiment; with volumes seeing a double-digit decline over the past three months, and the worst number of an over 32 per cent decline in production in June 2019.

Why are car sales falling?

Industry insiders feel that while the pressure on NBFCs and the liquidity squeeze in the market is a big factor, the decline in customer confidence is the other factor that is leading to a continuous slide in sales of passenger cars.

According to these sources, a third of the retail sales of Maruti Suzuki — the country’s largest carmaker — were funded by NBFCs, and a liquidity crisis for the NBFC sector has led to a drop in sales for lack of funding for customers.

Customers are also postponing their purchase decisions due to various considerations, including an expected fall in GST rates, and the hope that the transition from BS-IV to BS-VI may lead to big discounts between January and March 2020. Customers are also expecting discounts in the coming festive season.

However, company officials say that they do not expect the trend to be reversed in the near future.

Why is there a decline in the sales of commercial vehicles and tractors?

The NBFC liquidity stress has been playing a part in the decline in sales of vehicles across segments, as NBFCs are significant lenders in the tier II and smaller towns.

Tractor sales have been further hurt by weak farm sentiment, the slowdown in the rural economy, and fears of a worse than average monsoon this year. This comes amid the third advance estimates of crop production indicating a slide in rabi production. Kharif sowing has remained weak so far.

Truck sales have been hurt by changes made by the government in the axle load norms. Industry officials said that a significant decline in the sales of commercial vehicles has been visible ever since the increased axle load has become effective. The industry has been calling for a scrappage policy and other policy support measures to revive demand.

According to data released by the Society of Indian Automobile Manufacturers (SIAM), overall, the commercial vehicles segment registered a decline of 9.53 per cent in April-June 2019 as compared to the same period last year. While the medium & heavy CVs declined 16.60 per cent, LCVs declined by 5.06 per cent during the quarter.

What does this situation indicate?

The sharp decline in sales numbers of the leading manufacturer shows the decline in consumer sentiment and indicates an overall slowdown in the economy. The drop in sales over the last one year has led major manufacturers to cut production, and has put pressure on the overall automotive sector, including the automobile ancillaries.

Last month, Ashok Leyland shut its manufacturing plant in Pantnagar, Uttarakhand, for nine days until July 24 because of weak demand for commercial vehicles. The plant, which can manufacture 1.5 lakh units annually, was earlier closed intermittently for some seven days between June 17 and June 29.

Tata Motors is learnt to have decided to close its Pantnagar facility in July for a couple of days in order to ensure improvement in productivity.

Maruti Suzuki has cut vehicle production for the last seven months, including in July 2019.

There have already been job losses across the value chain of the automobile sector, including in the dealerships and ancillaries. The continuing decline in sales is now expected to put pressure on manufacturers to cut down on their costs, and reduce headcounts.

And how are two-wheelers faring?

The two-wheeler segment — the more affordable form of motorised mobility and an indicator of consumption demand in the hinterland — has also seen a slowdown.

Hero MotoCorp, the world’s largest two-wheeler manufacturer and the market leader in India, Honda Motorcycle & Scooter India, the second biggest two-wheeler player in the Indian market, and TVS Motor Co, all reported a clear drop in dispatches in the months leading up to July.

What happens in the auto segment from here on?

The outlook for the rest of the year will depend on multiple factors, including the progress of the monsoon and the festive season offtake, as well as improvement in the liquidity situation.

Like tractors, the drop in two-wheeler volumes is a key indicator of rural distress. In the two-wheeler segment, motorcycle sales are predominantly dependent on rural India; people in rural areas prefer motorcycles to scooters given their sturdier structure, better performance, and lower operational costs, especially in the economy segments.

The continued sluggishness in two-wheeler volumes is worrying, given that India, despite now being the world’s biggest two-wheeler market, still has a very low penetration level of two wheelers. Only about 102 out of every 1,000 people have two-wheelers in India — less than half the penetration levels in Indonesia (281) and Thailand (291).