BRICS Summit: What it means for India in the global order

As Prime Minister Narendra Modi attends the 11th BRICS Summit in Brasilia, his sixth since he assumed office in 2014, it will be the beginning of what New Delhi sees as the “second cycle” of BRICS. 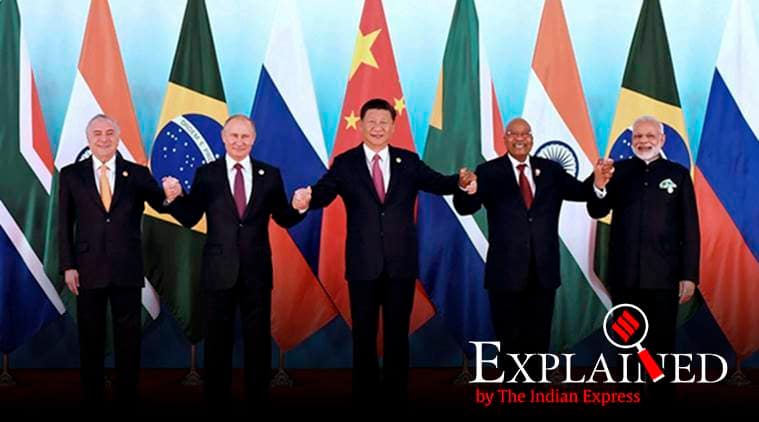 In this photo released by Xinhua News Agency, BRICS leaders stand for a photograph.

On Tuesday, Prime Minister Narendra Modi left for Brazil to attend the 11th BRICS Summit. What is on the agenda of this grouping, and why is it important?

BRICS Summit: The origins, and now

On November 30, 2001, Jim O’Neill, a British economist who was then chairman of Goldman Sachs Asset Management, coined the term ‘BRIC’ to describe the four emerging economies of Brazil, Russia, India, and China.

In a paper, ‘The World Needs Better Economic BRICs’, written for the Goldman Sachs ‘Global Economic Paper’ series, O’Neill — who went on to serve as Commercial Secretary to the Treasury between 2015 and 2016 in the governments headed by David Cameron and Theresa May — made a case for BRIC on the basis of econometric analyses projecting that the four economies would individually and collectively occupy far greater economic space and become among the world’s largest economies in the next 50 years or so.

“In 2001 and 2002, real GDP growth in large emerging market economies will exceed that of the G7. At end-2000, GDP in US$ on a PPP basis in Brazil, Russia, India and China (BRIC) was about 23.3% of world GDP. On a current GDP basis, BRIC share of world GDP is 8%. Over the next 10 years, the weight of the BRICs and especially China in world GDP will grow, raising important issues about the global economic impact of fiscal and monetary policy in the BRICs. In line with these prospects, world policymaking forums should be re-organised and in particular, the G7 should be adjusted to incorporate BRIC representatives,” O’Neill wrote.

Answering a question, “Should the G7 be replaced by a G9?”, he wrote it seems quite clear that the current G7 needs to be “upgraded” and room made for the BRICs in order to allow more effective global policymaking.

And, about India’s role, he wrote, “India would almost definitely be the least eager to join the G9 club. They might regard any ‘obligati’ns’ as unwelcome, as well as possibly seeing their own experiences as limiting their ability to give ‘advice’. However, in view of their size, population and potential (and their geographical location), the possible inclusion of India would be attractive.”

Eighteen years later, India finds itself as one of the emerging economies in the grouping and beyond, especially G20. BRICS now brings together five economies accounting for 42% of the world’s population, 23% of the global GDP and an around 17% share of world trade.
As a formal grouping, BRIC started after the meeting of the leaders of Russia, India and China in St Petersburg on the margins of the G8-Outreach Summit in July 2006. The grouping was formalised during the first meeting of BRIC Foreign Ministers on the margins of the UNGA in New York in September 2006. The first BRIC Summit was held in Yekaterinburg, Russia, on June 16, 2009.

It was agreed to expand BRIC to BRICS with the inclusion of South Africa at the BRICS Foreign Ministers’ meeting in New York in September 2010. South Africa attended the third BRICS Summit in Sanya on April 14, 2011. Last year, leaders of the grouping commemorated the 10th anniversary of BRICS in Johannesburg.

As Modi attends the 11th BRICS Summit in Brasilia, his sixth since he assumed office in 2014, it will be the beginning of what New Delhi sees as the “second cycle” of BRICS. Since July 2014 in Fortaleza in Brazil, Modi’s first multilateral summit after becoming Prime Minister, the grouping has completed the first cycle during his regime in India.

While the economic heft of three of the five countries has been dented in the last few years, the BRICS cooperation has two pillars — consultations on issues of mutual interest through meetings of leaders and ministers, and cooperation through meetings of senior officials in areas including trade, finance, health, education, technology, agriculture, and IT.

Also, India has to maintain the balancing act between Russia-China on the one side and the US on the other. While India has had a growing role in global affairs in the last decade or so, and is seen to be helping drive the global agenda, the current crop of BRICS leaders too are seen as strong personalities — from Chinese President Xi Jinping to Russian President Vladimir Putin to Brazil’s President Jair Bolsonaro — with a pronounced nationalistic agenda. South Block views this as a potential for cooperation, as the leaders have more in common than their predecessors. New Delhi believes that over the last few years, India has taken the lead in galvanising BRICS has also worked within the grouping to take a strong stand against terrorism and bring about focused consultations on specific aspects relating to terrorism.

On the table in Brazil

This year, the joint working group on counter-terrorism has decided to constitute sub-working groups in five areas: terrorist financing; use of Internet for terrorist purposes; countering radicalisation; the issue of foreign terrorist fighters; and capacity-building. It is expected that India will chair the subgroup on use of Internet for terrorist purposes. During meetings of National Security Advisers of BRICS last month, India’s NSA Ajit Doval put forward a proposal to host a BRICS workshop on digital forensics in India. Brazil has also made terrorism one of the priorities for its presidency. It held the first BRICS seminar on Strategies for Countering Terrorism.

The fact that BRICS has put counter-terrorism on top of the agenda has been a success for India. That was evident in the BRICS Summit in Xiamen in September 2017, with China as the chair. The fact that it was achieved, despite the strained ties due to the standoff in Doklam, was a testimony to the value Beijing and New Delhi attach to the outcomes of the grouping.

Leaders will attend a BRICS-restricted session, expected to focus on challenges and opportunities for the exercise of national sovereignty in the contemporary world. In the Plenary Session, leaders will discuss cooperation for economic development of BRICS societies. A meeting of BRICS leaders with BRICS Business Council will take place, and BRICS MoU among Trade and Investment Promotion agencies will be signed. On the conclusion, Summit leaders will issue a joint declaration.

The Summit will be an opportunity for India to lay the groundwork for hosting the 2021 Summit scheduled in India. The last Summit took place in Goa in 2016. India will also be mindful of the fact that the G20 Summit to be hosted in India will take place in 2022, and this will be an opportunity to synergise the two agendas from New Delhi’s lens as well.

Bailable warrants against Shashi Tharoor for non-appearance in defamation case