Explained: Why Argentina’s pro-abortion movement is associated with green handkerchiefs

While Argentina’s president Alberto Fernández gave the final push to the bill, the legalisation of abortion is a victory of a growing grassroots women’s movement. 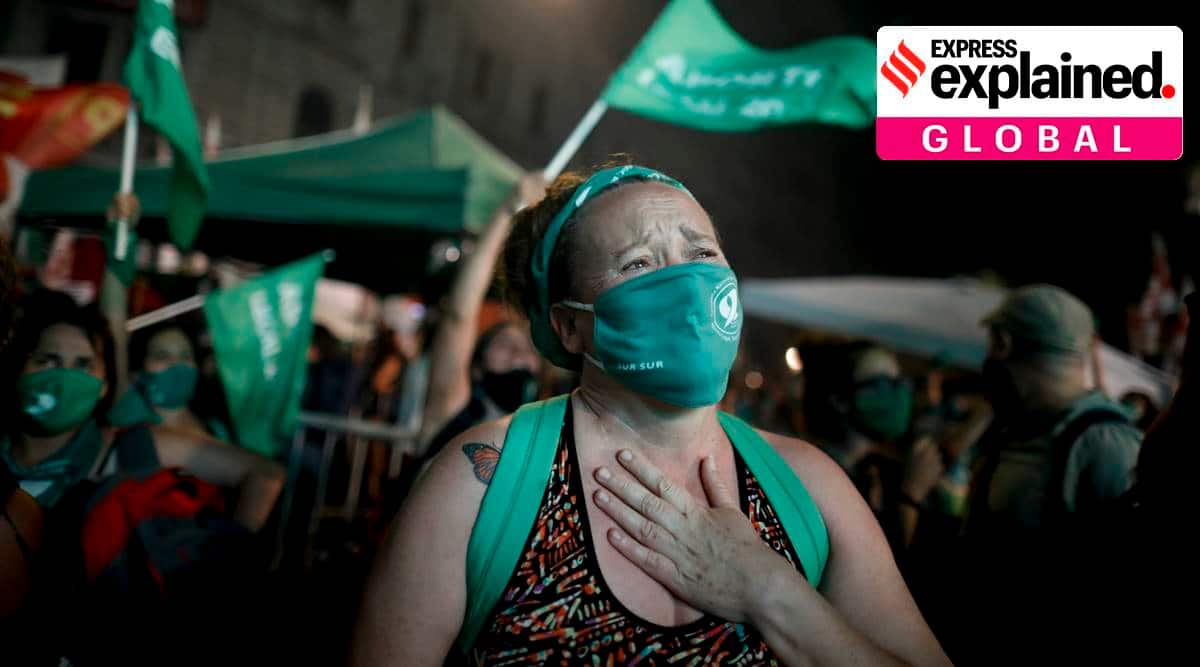 An abortion-rights activist reacts after lawmakers approved a bill that legalizes abortion, outside Congress in Buenos Aires, Argentina, Wednesday. (AP)

Argentina has become the largest Latin American country to legalise abortion up to the 14th week of pregnancy after the bill was approved by 38 votes in favour to 29 against, with one abstention.

The decision is ground-breaking given that the majority Roman Catholic country had some of the world’s most restrictive abortion laws and a similar bill was overturned in 2018 in the country under pressure from the Catholic church.

While Argentina’s president Alberto Fernández gave the final push to the bill, the legalisation of abortion is a victory of a growing grassroots women’s movement.

Earlier this week, when the news came that the bill had been approved, thousands in the country took to streets and cheered while waving green handkerchiefs — which has come to symbolise the women’s movement in Argentina and eventually in other Latin American countries — in what is called ‘La Marea Verde’ or the ‘Green Wave’.

How did green handkerchiefs became a symbol of Argentina’s pro-abortion movement?

Although it isn’t clear exactly when the pro-abortion movement in Argentina became associated with green handkerchiefs, over the years, as the movement gained momentum and spread across Latin America, the two have become intrinsically linked.

According to an opinion piece by CNN correspondent Jill Filipovic, green handkerchiefs have “become a symbol of freedom and citizenship” and are a symbol of women’s rights.

“Walking the streets in Argentina anywhere, you see the young girls wearing the green handkerchiefs in their backpacks as they go to school,” Filipovic quoted Giselle Carino, an Argentinean feminist who is the CEO and regional director of International Planned Parenthood Federation/Western Hemisphere Region saying.

In 2018, when the Argentine Congress was to consider the bill to legalise abortion, the country had seen thousands of women of all ages taking to the streets — with green handkerchiefs, green posters, green flags — as they demanded the passage of the bill.

Prior to that, pro-choice activists had campaigned for years to change the abortion laws that date from 1921, adopting a green scarf as their symbol. Worn as a mask, head-scarf, or around the wrist, the green colour symbolises the fight for women’s rights and autonomy.

It is also said that the handkerchief as a symbol of women’s rights and resistance was inspired by the grandmothers of the Plaza de Mayo at Buenos Aires in Argentina, who donned white kerchiefs to protest against the killings and kidnappings during the dictatorship.

What are the provisions of Argentina’s pro-abortion bill?

In Argentina, prior to the passing of the bill, terminations were allowed in only two instances: rape, and danger to the mother’s life. The new bill provides for a greater autonomy and control for women over their own bodies, their reproductive rights, and also provides better healthcare for pregnant women and young mothers.

Before this historic judgement, females had to undergo illegal and unsafe procedures for abortion clandestinely. “Every year around 38,000 women are taken to hospital due to (clandestine) abortions and since the restoration of democracy (in 1983) more than 3,000 have died,” said President Fernandez had said in the Senate when the bill was debated.

According to Human Rights Watch, unsafe abortion was the leading cause of maternal mortality in the country. In most countries, such as Brazil, abortions are only permitted in extremely limited circumstances such as rape or risk to the mother’s life, while in some, such as the Dominican Republic, they are banned altogether. In El Salvador, Honduras and Nicaragua, women can even be sentenced to jail for having a miscarriage.