Explained: Who were the Chicago 7, and what happened during their trial?

The trial of the Chicago seven was an important moment in the history of America as it raised questions on the first amendment to the constitution and brought to light the culture clash in the country. 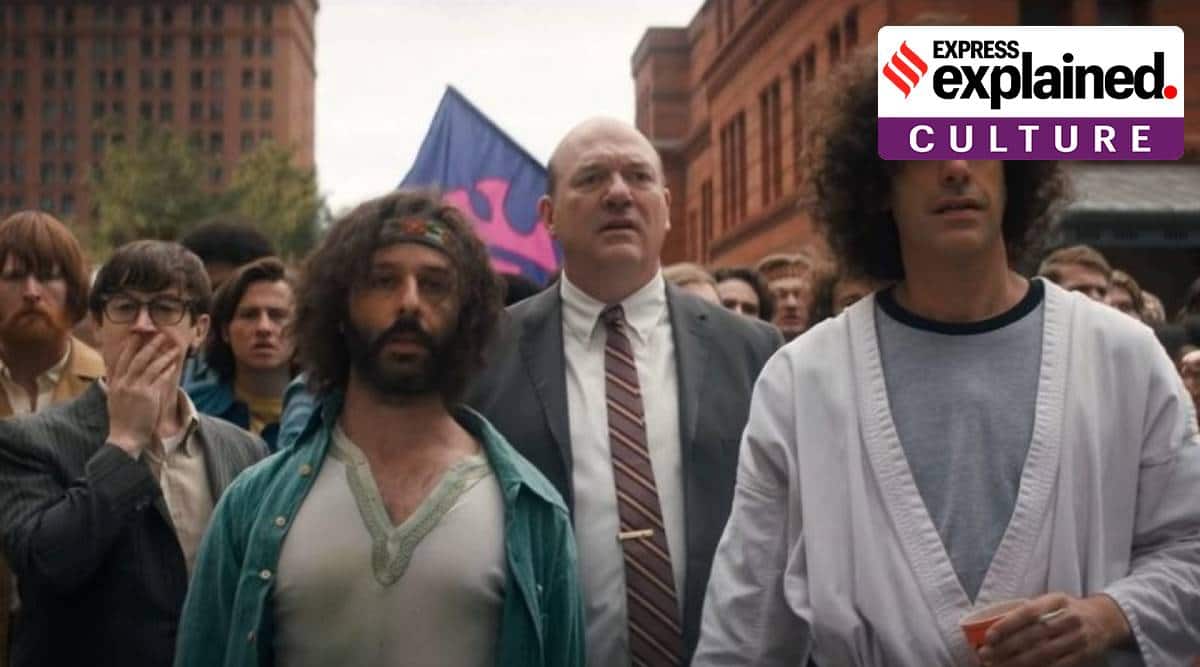 The Trial of the Chicago 7 will begin streaming on Netflix from October 16. (Photo: Netflix)

The year 1968 is often seen as the most turbulent year in 20th century American history. The Vietnam war had started out, civil rights activist Martin Luther King Jr. was assassinated resulting in violent riots, and the presidential election turned out to be a referendum on the war set against the background of protests and clashes between the public and state authorities. Filmmaker Aaron Sorkin, in his recent historical drama, took an important leaf out of this dramatic year.

‘The trial of Chicago 7’ that was released on Netflix earlier this month is the story of the seven (initially eight) anti-Vietnam war protesters who were charged with conspiracy and inciting riots at the 1968 Democratic National Convention in Chicago. The film follows the drama that unfolded during the trial of the Chicago 7, on many occasions pulling out dialogues straight from the courtroom as they had been uttered. By the end of the trial, five out of the seven defendants were convicted for inciting riots and all of them were given lengthy sentences for contempt of court. However, in 1972, the convictions were overturned by the United States Court of Appeals for the seventh circuit on the ground that the judge was racially and culturally biased in his verdict.

The trial of the Chicago seven was an important moment in the history of America as it raised questions on the first amendment to the constitution and brought to light the culture clash in the country. 📣 Click to follow Express Explained on Telegram

Who were the Chicago seven (eight)?

In August 1968, the streets of Chicago were thick with demonstrations, rallies, marches and rock concerts protesting against the Vietnam war. In the course of the protests, violent clashes broke out between the demonstrators and the police, and swelled into a full fledged riot. The police used tear gas, verbal and physical intimidation to keep the protesters out of the streets. In the course of the next few days, the police made several arrests and aggressively stopped journalists from covering the incident.

Among the thousands on the streets, eight organisers came to be accused by the federal justice system of having incited the riots. The Chicago eight were important faces in different activist groups. The only thing tying them together was a shared critique of the American government. Abbie Hoffman and Jerry Rubin were co-founders of the highly theatrical, counter-culture revolutionary movement called the Youth International Party, whose members were popularly known as ‘Yippies’. David Dellinger led the ‘National Mobilization Committee to End the War in Vietnam’, and was one of the senior-most among the eight. Tom Hayden and Rennie Davis were former leaders of the Students for a Democratic Society. Lee Weiner was a research assistant in Northwestern University and John Froines was professor of Chemistry at Oregon University.

The eighth defendant, Bobby Seale, was the founder of the Black Panthers Party at Oakland, California, a Black political organisation that carried out armed citizens patrol, monitoring the behaviour of the Oakland police force. Seale and the judge, Julius Hoffman were constantly at odds, with the latter making racist statements against him. Hoffman ordered Seale to be gagged, and finally declared a mistrial in his case, sentencing him to four years in prison. Consequently, seven defendants were left in the trial.

Review | The Trial of the Chicago 7 review: The Aaron Sorkin film is spectacular

What happened during the trial?

The trial began during the fall of 1969 and went on for the next five months. The Chicago eight were charged with conspiring to cross interstate boundaries with the intent of causing riot. Historian Bruce Ragsdale in his research paper, ‘The Chicago seven: 1960s radicalism in the federal courts’ wrote about the trial, “the defendants and their lawyers used the courtroom as a platform for a broad critique of American society and an almost anarchic challenge to the legitimacy of governmental authority.” “The nearly five-month long trial illustrated the contentious and often theatrical nature of public affairs during the late 1960s and early 1970s.”

What stood out during the trial was the amount of theatrics employed by the defendants and their lawyers in putting forth their case. For instance, Rubin pleaded not guilty with a raised fist, while Hoffman, on being introduced to the jury, blew them a kiss. In what was one of the most dramatic moments in the trial, Hoffman and Rubin entered the courtroom in judicial robes, flung them to the door and stomped on them as a way to demonstrate contempt against judicial authority. With judge Hoffman reacting all too easily to the courtroom demonstrations, it only added to the drama of the proceedings.

Explained: Why Netflix film ‘The Trial of the Chicago 7’ is significant

The defense called more than a hundred witnesses, many of them bystanders who testified about the unprovoked police violence and injuries among the demonstrators. Well known writers and performers like Allen Ginsberg, Dick Gregory, and Judy Collins too testified to the peaceful intent of the demonstrators.

After the argument phase, while the jury deliberated on the verdict, Judge Hoffman cited the defendants and their lawyers for 159 counts of criminal contempt. “Some of the convictions were for courtroom outbursts and profanities, many were for laughter and others were based on the refusal of a defendant to rise as the judge entered or left the courtroom,” noted Ragsdale. Finally on February 19, 1970 the jury returned its verdict. Froines and Weiner were acquitted, while the remaining defendants were convicted of having crossed state lines with the intent of inciting riots and giving inflammatory speeches. They were fined $5000 dollars each and sentenced to five years in prison. Two, years later though, the sentence was overturned.

Also in Explained | Why is everyone but Kazakhstan miffed with the Borat sequel?

Sorkin’s cinematic representation of the trial ends on a rather memorable note, as Haydon (played by Eddie Redmayene), offers a statement to the court right before the sentence, reading out the names and age of the 4,752 officers from the US troops who had been killed in the Vietnam war since the proceedings against the eight of them began.