Explained: As Uddhav Thackeray and Eknath Shinde battle over Shiv Sena symbol, how will EC decide?

Following the split led by Eknath Shinde, Uddhav Thackeray's Shiv Sena has urged the Election Commission to hear its side before deciding any claims to the party's bow & arrow symbol. How does the EC decide on such disputes? The stage is set for yet another battle over a political party’s symbol.

On Monday, the Uddhav Thackeray-led Shiv Sena approached the Election Commission of India, requesting it to hear its side before deciding claims to the party’s bow-arrow symbol. The Shiv Sena has lost a large number of members in the Eknath Shinde-led rebellion that eventually caused the fall of the Thackeray-led government in Maharashtra.

Also Read |Explained: For Eknath Shinde, road to claim Shiv Sena symbol may not be easy

The Thackeray camp approaching the EC was a pre-emptive move, since the dispute hasn’t yet officially reached the EC’s doorstep. Shinde, who has claimed to be the “original” Shiv Sena on the basis of the support of more than two-thirds of the party’s legislators in the Maharashtra Assembly, has not officially written to the EC yet to stake claim to the party symbol.

“We have filed a caveat with the ECI, requesting it to make the original Shiv Sena [led by Uddhav Thackeray] a party to the case if any party or group approaches the ECI with regard to any matter related to Shiv Sena,” Shiv Sena MP Anil Desai said.

If and when the Shinde camp approaches the EC, the latter will in all likelihood freeze the symbol so that neither of the two sides is able to use it until a final decision is made.

EC hearings are long and detailed, and may take at least six months. How does it decide who gets the symbol — often the very identity of a party and its fundamental connection with voters — when parties split?

What are the EC’s powers in such a dispute?

This applies to disputes in recognised national and state parties. For splits in registered but unrecognised parties, the EC usually advises the warring factions to resolve their differences internally or to approach the court. 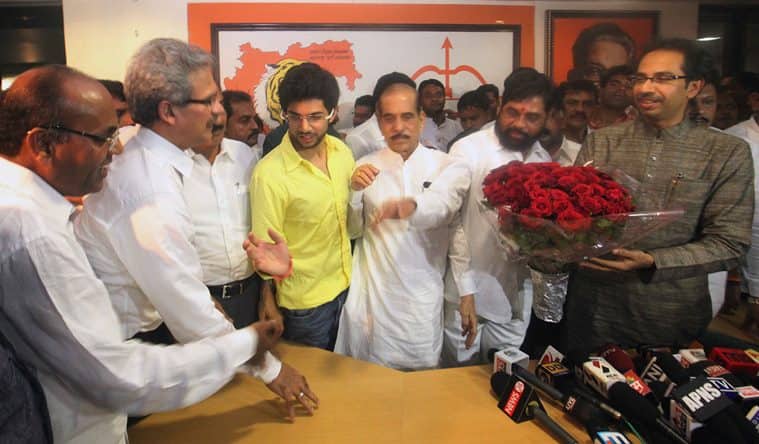 Uddhav Thackeray (extreme right) and Eknath Shinde (second from right) at Sena Bhavan in 2014. The party’s symbol is in the background. (Express Archive)

And how did the EC deal with such matters before the Symbols Order came into effect?

Before 1968, the EC issued notifications and executive orders under the Conduct of Election Rules, 1961. The most high-profile split of a party before 1968 was that of the Communist Party of India in 1964. A breakaway group approached the EC in December 1964, urging it to recognise it as CPI(Marxist). They provided a list of MPs and MLAs of Andhra Pradesh, Kerala and West Bengal who supported them. The ECI recognised the faction as CPI(M) after it found that the votes secured by the MPs and MLAs supporting the breakaway group added up to more than 4% in the 3 states.

Opinion |Eknath Shinde or Uddhav Thackeray, who is the real Shiv Sena

What was the first case decided under Para 15 of the 1968 Order?

It was the first split in the Indian National Congress — in 1969. Then Prime Minister Indira Gandhi’s tensions with a rival group within the party came to a head with the death of President Dr Zakir Hussain on May 3, 1969. The Congress old guard, led by K Kamaraj, Neelam Sanjiva Reddy, S Nijalingappa and Atulya Ghosh — known as the ‘Syndicate’ — nominated Reddy for the post. Indira Gandhi encouraged Vice-President V V Giri to contest as an Independent, and called for a “conscience vote” in defiance of the whip issued by party president Nijalingappa. After Giri won, Indira was expelled from the Congress, and the party split into the “old” Congress(O) led by Nijalingappa and the “new” Congress (R) led by Indira Gandhi.

The “old” Congress retained the party symbol of a pair of bullocks carrying a yoke; the breakaway faction was given the symbol of a cow with a calf.

Also Read |No one can take away Sena’s ‘bow and arrow’ symbol: Uddhav Thackeray

Is there a way other than the test of majority to resolve a dispute over election symbols?

In almost all disputes decided by the EC so far, a clear majority of party delegates/office bearers, MPs and MLAs have supported one of the factions. Whenever the EC could not test the strength of rival groups based on support within the party organisation (because of disputes regarding the list of office-bearers), it fell back on testing the majority only among elected MPs and MLAs.

Only in the case of the split in the AIADMK in 1987, which happened after the death of M G Ramachandran, was the EC faced with a peculiar situation. The group led by MGR’s wife Janaki had the support of the majority of MPs and MLAs, while J Jayalalithaa was supported by a substantial majority in the party organisation. But before the EC was forced to make a decision on which group should retain the party symbol, a rapprochement was reached.

Advertisement
Opinion |Which is the ‘real’ Shiv Sena? Answer lies with the Constitution and Supreme Court

What happens to the group that doesn’t get the parent party’s symbol?

In the case of the first Congress split, the EC recognised both the Congress(O) and the breakaway faction whose president was Jagjivan Ram. The Congress(O) had a substantial presence in some states and satisfied the criteria fixed for recognition of parties under Paras 6 and 7 of the Symbols Order.

This principle was followed up to 1997.

However, things changed when the Election Commission dealt with the cases of splits in the Indian National Congress and Janata Dal. The disputes led to the creation of Himachal Vikas Congress, Manipur State Congress Party, West Bengal Trinamool Congress, Rashtriya Janata Dal, Biju Janata Dal, etc. The EC then did not recognise the new parties as either state or national parties. It felt that merely having MPs and MLAs is not enough, as the elected representatives had fought and won polls on tickets of their parent (undivided) parties. The EC introduced a new rule under which the splinter group of the party — other than the group that got the party symbol — had to register itself as a separate party, and could lay claim to national or state party status only on the basis of its performance in state or central elections after registration.

No complaints of corruption in Central schemes in panchayat system here: Union minister