Explained: What will you have to pay for Serum Institute’s Covishield vaccine after May 1?

The announcement is a result of the Narendra Modi government’s decision to open up vaccinations against Covid-19 to those above the age of 18 years.

The Serum Institute of India (SII) has announced the price at which it plans to sell Covishield to States and private hospitals. It also says that the vaccines will be available in retail and free trade in a few months.

What are these prices and why should you care?

Why is SII announcing new prices for Covishield?

The announcement is a result of the Narendra Modi government’s decision to open up vaccinations against Covid-19 to those above the age of 18 years. As per this decision, 50 per cent of the vaccines that companies supply to India will be sold to the “open market” — states, private hospitals and individual companies that wish to vaccinate their employees.

What are the prices for Covishield?

The remaining 50 per cent of the doses manufactured by companies are to be provided to the Centre at a reduced rate. SII CEO Adar Poonawalla earlier revealed that this negotiated rate for Covishield was around Rs 150 a dose for the Centre. However, he has now said that the company will be charging Rs 400 per dose from the Centre as well, once its current purchase order with the government is exhausted, as per an interview he gave to CNBC TV-18 on Wednesday evening.

The Pune firm has also decided that, for the moment, it wants to sell the vaccine only to states and private hospitals. Citing the “complexity” and “urgency” of the situation, it said that it is challenging to supply the vaccine independently “to each corporate entity”. Therefore, it has urged all corporate and private individuals to access these vaccines “through the state facilitated machinery and private health systems”.

Who will have to pay for vaccinations against Covid-19 starting May 1?

Those between the ages of 18 years and 44 years are expected to pay for the vaccines, as they are not considered part of the country’s priority groups of vulnerable citizens under the government’s ongoing vaccination programme. “Since the Centre will provide free vaccinations only to persons above 45, state governments must provide free vaccinations to all younger adults from low-income families. Migrant workers and their families should receive free vaccinations in whichever state they are located, without domicile requirements,” said Public Health Foundation of India President Professor K Srinath Reddy.

Explained |Why India needs Covid-19 vaccine ingredients from US

Will the prices SII is charging states and hospitals be the same price I will have to pay for the vaccines?

No. It is up to states to decide how it will supply the vaccine doses it procures directly from manufacturers, including how these doses will be rationed out and what segments of the population it may or may not charge for them. As private hospitals are procuring the doses at Rs 600, it is likely that they will add the cost of administering the vaccine and also mark up the prices to include a certain amount of profit. While the Centre had capped the rate that private facilities could charge those in the priority groups earlier, it had not given any specific mandate for the doses that will be sold to private facilities in the open market. What it has said so far is that the private hospitals will have to “transparently” declare their pre-set vaccination prices. 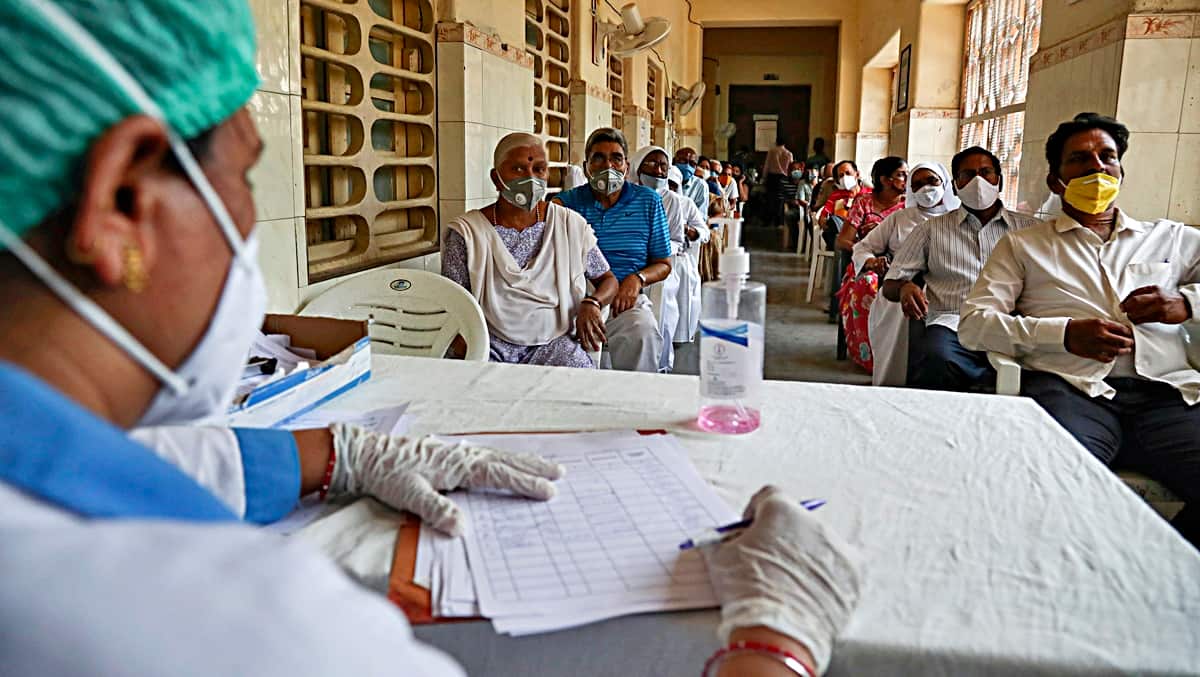 People wait for their turn to be administered COVISHIELD vaccine at a government hospital in Hyderabad, India, Monday, April 12, 2021. (AP Photo/Mahesh Kumar A.)

It is also not clear at the moment whether states will intervene and cap the prices that hospitals can charge for the doses they procure through this route.

What if I am above the age of 45 years? Will I have to pay these prices?

However, it is likely that they will have to pay a higher price than the reduced rate of Rs 250 per dose that they were offered at private hospitals, as these facilities will now have to exclusively procure directly from the companies themselves.

Can I get the vaccine at a pharmacy?

SII in an official statement has said that its vaccines will be available in “retail and free trade” in 4-5 months. It is unclear at what price the doses will be available through this route. However, the firm’s CEO had earlier this year said that he intended to provide the vaccine at around Rs 1,000 per dose in the private market.

Will I be able to get these vaccines starting May 1?

While the government intends to open up vaccinations for those above 18 years of age from May 1, Covishield may only become available to private hospitals in the third or fourth week of May, Poonawalla told CNBC TV-18. This is because SII still has to fulfill its earlier orders from the Centre.

Bharat Biotech’s Covaxin is the only other Covid-19 vaccine currently available in the country’s immunisation programme. The Hyderabad-headquartered company has so far not made public its open market prices for states, private hospitals and individual companies that wish to procure doses to vaccinate their employees. It also has not clarified when it will be able to make available doses for the 18-44 year age group.

While this is currently a two-dose vaccine, the company is currently testing the possibility of providing a third dose of Covaxin around six months after the second dose.

Are any other vaccines going to be available in India?

Russia’s Sputnik V is expected to start becoming available to India from the end of May. The price of one dose in international markets has been cited as “less than” around Rs 750 a dose. However, it is unclear at what price Dr Reddy’s Laboratories, which will be importing and distributing the jabs here, will provide the doses to the Centre and in the open market. Negotiations between the Hyderabad company and the government are still underway.

The government has also been trying to attract Pfizer, Moderna and Johnson & Johnson through recent changes to its policy on approving foreign vaccines.

Johnson & Johnson plans to conduct a bridging study in India before launching its vaccine here, which would take a few months. Pfizer, which was the first company to approach India for emergency use authorisation of its vaccine with BioNTech, decided to withdraw its application in February after it had been told to conduct local trials. Now that the government is allowing approvals to vaccines with Emergency Use Authorizations (EUAs) from the US, UK and Japan as well as those with WHO Emergency Use Listings, it is expected that Pfizer may come back to the negotiating table.

Moderna has so far not expressed an interest in making its vaccine available here.

Which states are providing free vaccinations to those above 18 years? Which states have expressed concerns and why?

Some states like Uttar Pradesh, Assam and Madhya Pradesh have announced that they would provide the vaccines free of cost to those above the age of 18 years.

Other states like West Bengal, Kerala and Rajasthan have written to the Centre arguing that decentralising the procurement of vaccines for this age group and making them compete with private hospitals would lead to high costs.

West Bengal Chief Minister Mamata Banerjee, especially, has argued that the Centre refused to allow the State to purchase vaccines back in February so that it could provide free vaccinations to its people. “No response was received from your end. Now when the number of cases in the second wave is spiralling like anything, the Centre has chosen to tactically indulge in empty rhetoric and shy away from its responsibility for making available vaccines to the people of the country,” Banerjee wrote. “It is apprehended that the announced policy might lead to unscrupulous mechanisms in the market, including pricing of vaccines as it appears to be based on market prices which may put the common people under huge financial burden,” she said.