Explained: What is the Pollachi sexual abuse case?

Pollachi sexual abuse case: The case snowballed into a major scandal after local media reported that no less than a few hundred women in the town were victims of an organised racket of sexual abuse, blackmail and extortion. College students and women from several organisations hold placards as they stage a protest urging the government to act immediately on Pollachi’s sexual assault incident, in Madurai (PTI)

In February this year, four men were arrested for allegedly blackmailing, sexually harassing and filming a 19-year-old college student in Pollachi, a small town near Coimbatore in Tamil Nadu. The case snowballed into a major scandal after local media reported that not just one but a few hundred women were victims of an organised racket of sexual abuse, blackmail and extortion. Compounding the horror, video clips of the alleged incidents, purportedly filmed by the accused, were also leaked within days of the media reports.

Interrogation of the accused has revealed that the racket may have been running since 2013.

The case, meanwhile, assumed political overtones after it was alleged that the perpetrators had links with the AIADMK. Two FIRs were filed — one by one of the victims and another by her brother.  Under pressure from Opposition DMK, both FIRs were transferred to the Central Bureau of Investigation by the state government.

The accused allegedly lured women with fake accounts on Facebook. After striking a conversation and befriending them, they later engaged in sexual activity with or without the consent of women as others filmed the abuse. The victims are from Chennai, Coimbatore, Salem and many parts of Tamil Nadu, and they include school and college teachers, doctors, senior secondary and college students, an official told The Indian Express.

Except for one victim, nobody else has so far filed a formal complaint apparently fearing a backlash from their families, police said. Tamil Nadu has a dedicated police helpline for crimes against women.

According to the victim who has lodged the complaint, the men had befriended her on WhatsApp some months ago. In February, they picked her up in a car on a state highway and sexually assaulted her. Others, meanwhile, filmed the assault taking place in the moving car. They later used this video to blackmail her for further sexual favours.

After the girl told her family about the incident, her brother approached the gang and requested them to delete the video. He was, however, threatened instead. The family then filed a police complaint.

In March, while addressing the media on the issue, Coimbatore (Rural) Superintendent of Police R Pandiarajan referred to the complainant by name.

Videos purportedly made from the cellphones of the accused were leaked and began to circulate on social media. At least three made their way to TV channels and the Internet.

In one of the videos, a blurred image of a young woman wearing leggings is seen with her hands shielding her upper body and a bare waist. She cowers, stepping from side to side in panic, shuddering as she pleads in Tamil, “Please anna, don’t hit me, don’t hit me.” Multiple men are in the room, one holding what appears to be a belt.

“I trusted you as a friend, why are you doing this,” she is heard pleading with her assailant, whom she addresses as Rishwandh. Tamil magazine Nakkheeran also released blurred videos. 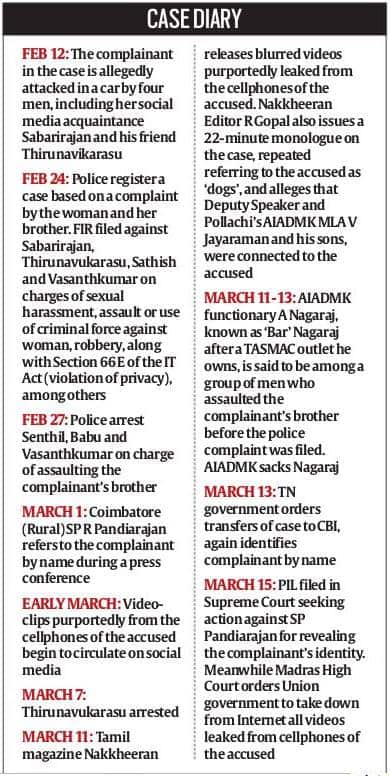 The ruling AIADMK has been criticised for the alleged involvement of its party leaders and for shielding the accused in the case. While one of the accused is an AIADMK local functionary, another leader named A Nagaraj is accused of assaulting the complainant’s brother. Tamil magazine Nakkheeran Editor R Gopal also alleged that the Deputy Speaker and Pollachi’s AIADMK MLA V Jayaraman, known as Pollachi Jayaraman, and his sons, were linked to the accused. Jayaraman has denied any role.

DMK slammed the ruling party, demanding a probe in the case. At a rally in Pollachi, Rajya Sabha MP Kanimozhi called for a probe into the case. Actor-politician Kamal Haasan’s Makkal Needhi Maiam also said the case would be raised prominently in the election campaign.

Pollachi women are facing further ramifications of the alleged abuse. “They’re saying on Facebook that nobody should marry girls from Pollachi,” said one 20-year-old college student in the town. “My parents now want to marry me off –  as if they’re afraid of what we may be doing on social media.”

Across the city, while there’s unanimity on the demand for an impartial and thorough probe in the case, the victims are also at the receiving end of criticism with many questioning their intentions.