Explained: What is Annular Solar Eclipse

Annular Solar Eclipse 2019: An eclipse happens when the moon while orbiting the Earth, comes in between the sun and the Earth, due to which the moon blocks the sun’s light from reaching the Earth, causing an eclipse of the sun or a solar eclipse. 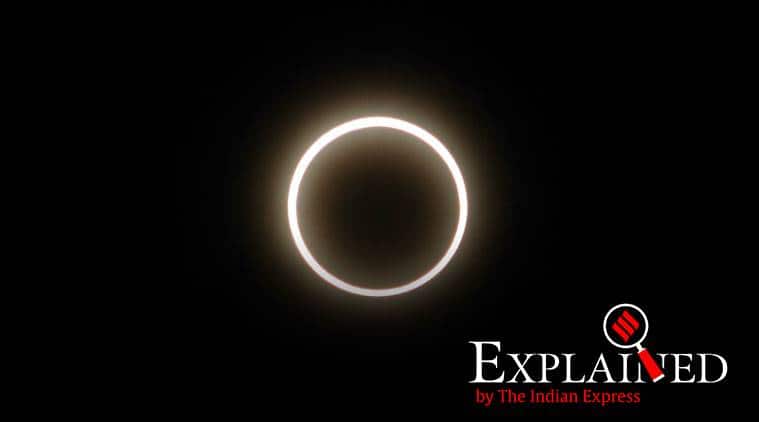 The last solar eclipse of this year will take place on December 26.

The last solar eclipse of this year will take place on December 26, which will fall over the eastern hemisphere of the Earth and be visible from India, Saudi Arabia, Qatar, Malaysia, Oman, Singapore, Sri Lanka, Mariana Islands and Borneo among a few other places.

What is an annular solar eclipse?

The second type of a solar eclipse is a partial solar, in which the shadow of the moon appears on a small part of the sun. The third kind is an annular solar eclipse, which happens when the moon is farthest from the Earth, which is why it seems smaller. In this type of an eclipse, the moon does not block the sun completely, but looks like a “dark disk on top of a larger sun-colored disk” forming a “ring of fire”.

Furthermore, during a solar eclipse the moon casts two shadows on the Earth, the first one is called the umbra, which gets smaller as it reaches the Earth. The second one is called the penumbra, which gets larger as it reaches the Earth. According to NASA, people standing in the umbra see a total eclipse and those standing in the penumbra see a partial eclipse. One of the reasons that NASA studies solar eclipses is to study the top layer of the sun called the corona. During an annular eclipse, NASA uses ground and space instruments to view this top layer when the sun’s glare is blocked by the moon.

Where can the annular solar eclipse be viewed from?

Some of the areas in India from where the annular solar eclipse can be viewed include Kannur, Ooty, Palakkad, Kozhikode, Erode Trichy, Madurai and Karaikudi among a few others. The annular eclipse will begin roughly around 8 am on December 26.

Is it safe to view solar eclipses?

NASA maintains that the sun can be viewed safely using the naked eye only during a total eclipse, while during partial and annular solar eclipses, the sun should not be viewed without proper equipment and techniques. Not using proper methods and equipment for viewing can cause permanent eye damage or severe visual loss, it says. Safety equipment includes eclipse glasses and using appropriate solar filters for covering binoculars, telescopes and cameras.

TikTok, Likee, and WhatsApp: Apps that gained popularity in 2019