Explained: Why the US government has declared water shortage for the Colorado River Basin for the first time

The shortage will lead to water cuts in some southwestern states starting October 2021. 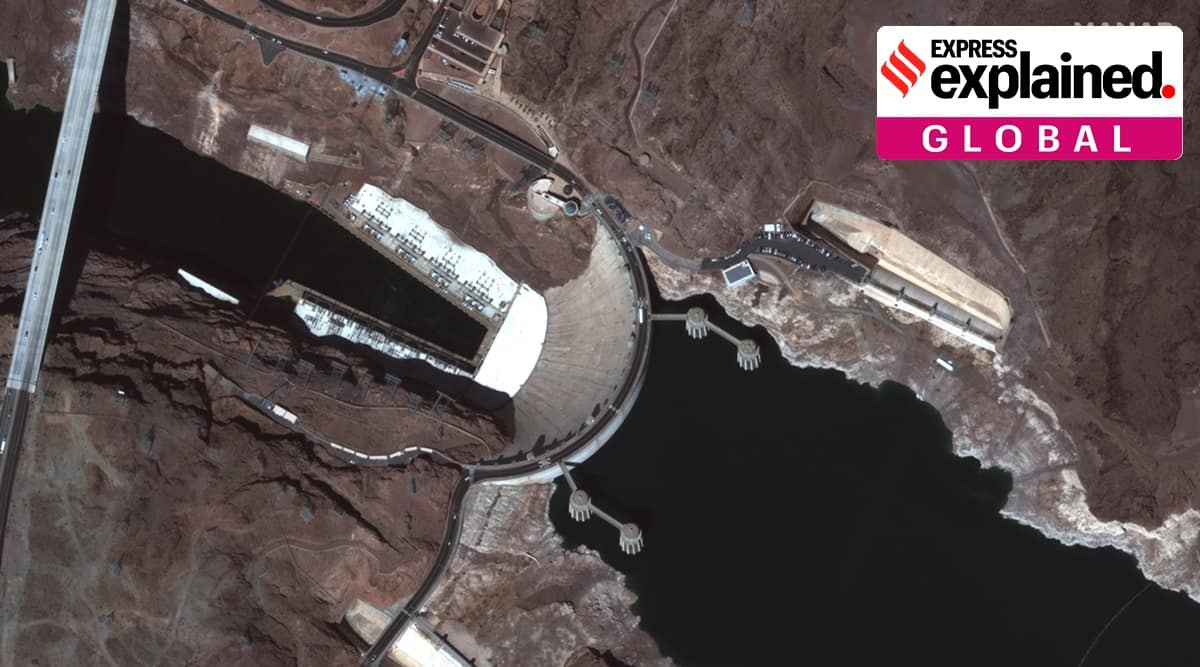 An aerial view shows the Hoover Dam on the Colorado River, US. (Reuters)

For the first time, on Monday, the federal government in the US declared a water shortage for the Colorado river basin due to a historic drought, which will lead to water cuts in some southwestern states starting October 2021.

According to August 2021’s study projections, the Bureau of Reclamation, which manages water and power deliveries, the release of water from two large reservoirs called Lake Mead and Lake Powell will be affected because of a historic drought that is impacting the entire Colorado river basin, which in turn will have implications for residents in southwestern US and some parts of northwestern Mexico.

Governors of ten western US states including Utah, Oregon, California, Colorado, Idaho, Montana, Nevada, New Mexico, North Dakota and Washington wrote to US President Joe Biden on August 15, requesting him to declare a Federal Emergency Management Agency (FEMA) drought disaster in these states that will provide more assistance to thousands of farmers in these states.

In the letter, the governors mentioned that the historic dry conditions have been exacerbated by recent record-setting temperatures and that the impacts are being felt by farmers, industries, local communities and economies.

Which states will be impacted by the water cuts and by how much?

Overall, over 40 million residents living across California, New Mexico, Utah, Colorado and Wyoming will be affected by the shortage since water from the river system is used for irrigation, drinking and also for generating hydroelectric power in these parts of the US.

The flow of the Colorado River

The Colorado River Basin is divided into the Upper (Wyoming, Colorado, New Mexico, Utah and northern Arizona) and Lower Basins (parts of Nevada, Arizona, California, southwestern Utah and western New Mexico). The entire Colorado river system is managed with a series of dams and canals to regulate flood control, water conservation and hydropower benefits, the Department of Interior (DOI) notes.

In the Lower Basin, the Hoover Dam controls floods and regulates water delivery and storage. Apart from the Hoover dam, there is the Davis Dam, Parker Dam and the Imperial Dam that regulate the release of water from the Hoover Dam. Water is released from these dams and used by residents in California, Nevada, Arizona and Mexico.

What are the reasons for the first water shortage declaration by the federal government?

Since the year 2000, this Colorado River Basin has been experiencing a prolonged drought. According to the Colorado River District, there have been a few wet years including 2008, 2010 and 2014, but remaining years have mostly been dry. This persistent drought has led to lowering down of the water levels in the basin’s reservoirs to meet the demand over the years.

There are two reservoirs at the centre of this water shortage. One is Lake Mead (see map), located in the state of Nevada just a few miles from Las Vegas. Lake Mead is the largest reservoir in the US in terms of volume and was formed in the 1930s by the Hoover Dam in Southern Nevada. It provides water storage in the lower basin of the Colorado river, the Water Education Foundation notes. Lake Mead’s main source of water is obtained from the Rocky Mountain snowmelt and run off.

The other is Lake Powell, the reservoir created by the Glen Canyon Dam in Arizona. Over 20 million people depend on Lake Powell to sustain their life. Over the last two decades, a sustained drought has been lowering the water levels in these two reservoirs. As per DOI, the western US has been experiencing an extended drought since 2000. In other words, the Colorado River Basin has experienced the driest 16-year period in over 100 years.

Even so, the Colorado River Basin’s capacity to store water has made the southwest resilient to droughts so far. The capacity of the Colorado river system reservoirs is about 60 million acre-feet, which as per DOI, is enough to cover the state of Utah in about 1 foot of water.

But even with a great water storing capacity, over the years the demand for water from the basin has increased whereas supply is restricted. The increasing demand is one reason that the levels of water in Lake Mead and Lake Powell have fallen. As of now, Lake Mead has less than half of the capacity of water it can store, which has raised concerns about the falling resilience of these large reservoirs.

This year the situation has been aggravated because the Upper Basin of the river system experienced an unexceptionally dry spring. The April-July runoff from the Rocky Mountains into Lake Powell was just 26 percent of average despite near-average snowfall in 2020. A report in The New York Times says that because of high temperatures, the soils have become so dry that they soak off most of the runoff, before it can reach the river.

Further, the Colorado River system storage right now is at 40 percent of its capacity. “Given ongoing historic drought and low runoff conditions in the Colorado River Basin, downstream releases from Glen Canyon Dam and Hoover Dam will be reduced in 2022 due to declining reservoir levels. In the Lower Basin the reductions represent the first “shortage” declaration—demonstrating the severity of the drought and low reservoir conditions,” a statement released by the Bureau of Reclamation said.