Explained: The sea route from Chennai to Vladivostok

This sea route covers a distance of approximately 5,600 nautical miles, or about 10,300 km. A large container ship travelling at the normal cruising speed of 20-25 knots, or 37-46 km/hour, should be able to cover the distance in 10-12 days. 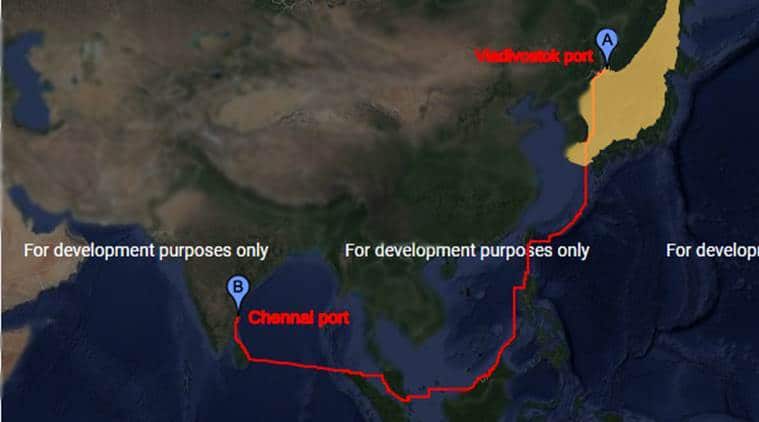 This sea route covers a distance of approximately 5,600 nautical miles, or about 10,300 km. (Source: ports.com)

During Prime Minister Narendra Modi’s visit to Vladivostok this week, a Memorandum of Intent was signed to open a full-fledged maritime route between Russia’s eastern port city and Chennai on India’s eastern seaboard.

“Opening of this route between Chennai and Vladivostok assumes significance because it ensures there will be connectivity between the two major ports which will give impetus to the cooperation between India and the Russian Far East,” PTI quoted Foreign Secretary Vijay Gokhale as saying.

In Russian, Vladivostok is ‘Ruler of the East’. Located on the Golden Horn Bay north of North Korea and a short distance from Russia’s border with China, it is the largest port on Russia’s Pacific coast, and home to the Pacific Fleet of the Russian Navy. It is the eastern railhead of the legendary Trans Siberian Railway, which connects the far east of Russia to the capital Moscow, and further west to the countries of Europe. At Vladivostok’s massive port, shipping and commercial fishing are the main commercial activities. Automobiles are a major item of import at the port, from where they are often transported further inland.

To Chennai, by sea

An ocean liner travelling from Vladivostok to Chennai would sail southward on the Sea of Japan past the Korean peninsula, Taiwan and the Philippines in the South China Sea, past Singapore and through the Strait of Malacca, to emerge into the Bay of Bengal and then cut across through the Andaman and Nicobar archipelago to Chennai.

This sea route covers a distance of approximately 5,600 nautical miles, or about 10,300 km. A large container ship travelling at the normal cruising speed of 20-25 knots, or 37-46 km/hour, should be able to cover the distance in 10-12 days. At suboptimal “slow steaming” speeds of 18-20 knots (33-37 km/hour), at which long-distance vessels sometimes travel to in order to save fuel, it might take slightly longer — 12-13 days.

India is building nuclear power plants with Russia’s collaboration in Kudankulam on the sea coast in Tamil Nadu’s Tirunelveli district. The opening of a sea route is likely to help in the project.

Even otherwise, a vibrant sea route will help in the upscaling of trade relations between the two nations. It will also increase India’s presence in the Indo-Pacific, and especially the South China Sea, a deeply contested patch of the ocean that Beijing considers its stomping ground.

“The India-Russia friendship is not restricted to their respective capital cities. We have put people at the core of this relationship,” the Prime Minister said in Vladivostok.