Explained: India’s strategic thinking on RCEP, and the China factor

RCEP has now been signed without India. The Indian Express has learnt that negotiators from Japan worked hard to keep the RCEP agreement “open for accession by India” and also said that India may participate in RCEP meetings as an “observer”. 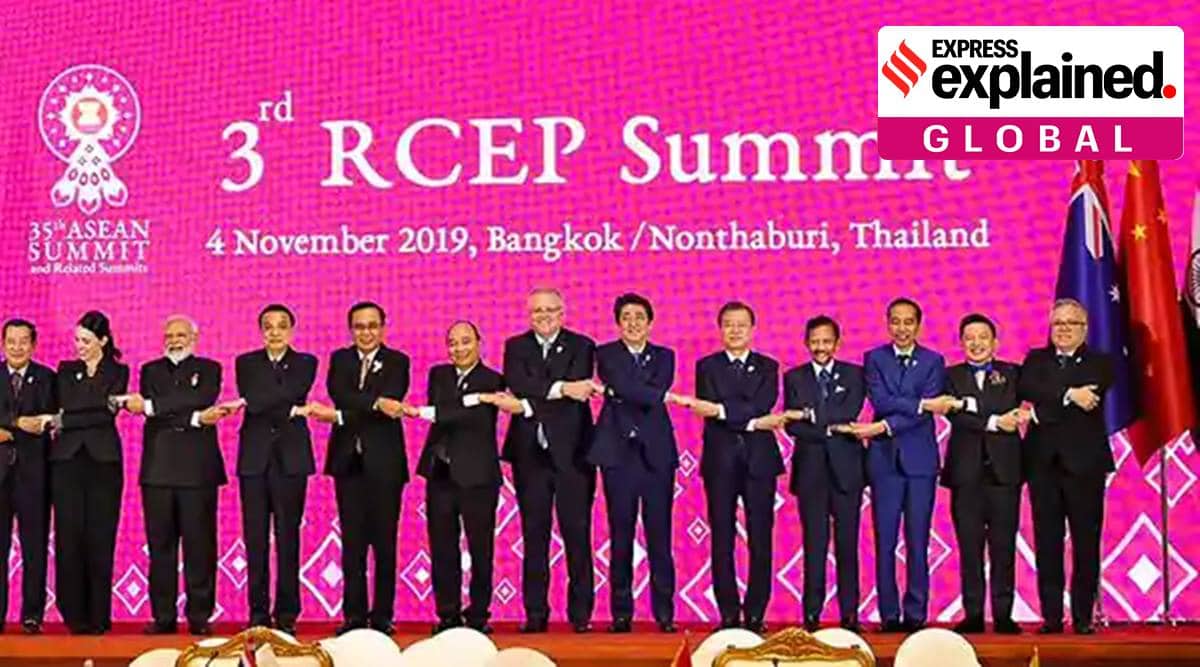 Some analysts argue that “if you don’t want to be on the menu, you have to be at the table”. That’s why India’s seat at the table as an “observer” is an important development, where Delhi can make sure that it is not on the “menu”.

There is a strategic context to India staying out of the Regional Comprehensive Economic Partnership (RCEP) that goes beyond purely economic or trade arguments and implications.

And even though India made its decision a year ago, the recent escalation of tensions with China amid the ongoing standoff at the Line of Actual Control in Ladakh appears to have played a role in shrinking the space for any argument to join the RCEP.

Days after Prime Minister Narendra Modi spelt out India’s decision to pull out of the mega deal early in November 2019, External Affairs Minister S Jaishankar, delivering the Fourth Ramnath Goenka Memorial Lecture on November 14 last year, had said India’s stance was based on a “clear-eyed calculation” of the gains and costs of entering a new arrangement, and that no pact was better than a “bad agreement”.

Jaishankar had said at the time that India had negotiated until the very end — and had taken a call after assessing what was on offer. He had also argued that India was not about to step back from its Act East policy, nor was the decision on RCEP connected to its approach to the Indo-Pacific. 📣 Click to follow Express Explained on Telegram

Some weeks later — before the Covid-19 pandemic disrupted trade and global supply chains — Jaishankar said that India “has not closed its doors” on RCEP, and will carry out a cost-benefit analysis to evaluate its merit. This was a slight nuancing of New Delhi’s position as Jaishankar addressed the Raisina Dialogue in mid-January this year.

But, as the pandemic expanded and deepened, and China’s aggression spanned from the South China Sea to the India-China border, New Delhi took a series of economic retaliatory steps — mostly in the digital domain — to signal to Beijing that it can’t be business as usual. The RCEP situation is evidence that the tensions on the LAC — including the June 15 Galwan incident in which 20 Indian soldiers and an unspecified number of Chinese were killed — have had wide-ranging impact.

Also in Explained | What are the economic implications of India opting out of RCEP?

The hardening of India’s position was evident in September, when Jaishankar made a thinly-veiled reference to the RCEP: “Now, we had taken globalisation as saying we will become more competitive, you know we will keep in touch with the world. Now, fast forward 20 years, what are you actually seeing? Can you honestly tell me that, oh yes, because of this openness, because of all these FTAs today, India is more innovative, India is more competitive, Indian manufacturing is thriving, Indian exports are booming, and they’re not. If they’re not, there’s a good reason. I agree that you cannot be a rising power without being a rising economy. To do that, you have to build your domestic capacities.

“Look, we are one of the few countries where today we have to give our own industry a level-playing field at home. What have we gone and done to ourselves? …Building on national capacity doesn’t make you anti global. On the contrary, I would argue that if you don’t have capacities, you end up as a market for other people’s goods… I would say if you want to actually participate more vigorously in the global economy, you must build stronger domestic capacities, and do what it takes for the gaps to be closed as a result of decades of disadvantage.”

This was the most clear enunciation of New Delhi’s argument against RCEP.

RCEP has now been signed without India. The Indian Express has learnt that negotiators from Japan worked hard to keep the RCEP agreement “open for accession by India” and also said that India may participate in RCEP meetings as an “observer”.

That Japan led the drafting of the Minister’s Declaration on India’s participation in RCEP is a reflection of the cooperation between India and like-minded countries — especially the Quad countries (Australia, the United States, Japan) — to have “resilient supply chains” in future. It is no secret that all Quad countries plus a few more — including New Zealand, South Korea and Vietnam — have been talking to each other to secure resilient supply chains, away from China. Japan and Australia, who have a difficult diplomatic relationship with China, have joined RCEP.

Srikanth Kondapalli, professor of Chinese studies at Jawaharlal Nehru University said, “China is trying to overcome Covid-19 disruptions and resurrect the supply chain mechanism and possibly put pressure on [US President-elect Joe] Biden. The Indo-Pacific so far ran on twin tracks of economy and security with economy on a weak wicket. China is trying to strengthen the base while the US [is focussed on] the security aspects. For India, RCEP hardly makes a difference as it has FTAs with ASEAN, and CEPAs (Comprehensive Economic Partnership Agreements) with Japan and South Korea already.”

The ramifications of India’s decision to opt out of RCEP will be tested. When India chose to stay out of the Belt and Road Initiative in 2017, there was much commentary that New Delhi might be isolating itself. Three years later, India’s position has been recognised by like-minded democracies, and many have said that India’s decision was prescient.

Some analysts argue that “if you don’t want to be on the menu, you have to be at the table”. That’s why India’s seat at the table as an “observer” is an important development, where Delhi can make sure that it is not on the “menu”.