Explained: The takeaways from Left-Congress-ISF’s Brigade Ground rally in Kolkata 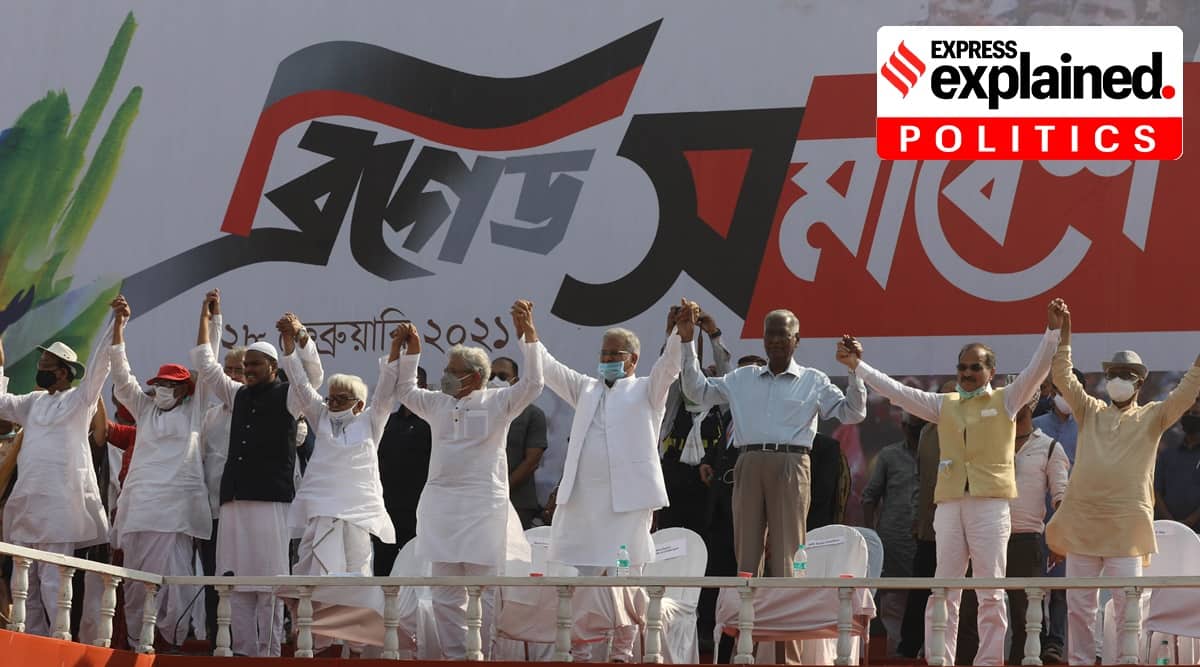 Left, Congress and ISF leaders on stage at the Brigade rally in Kolkata on Sunday. (Express Photo: Partha Paul)

In a massive show of strength, the CPM-led Left Front, Congress and Muslim cleric Abbas Siddiqui’s Indian Secular Front (ISF) held a rally at Kolkata’s iconic Brigade Parade Ground on Sunday. It was the first time that a joint rally of this kind was held, which is likely to make an impact in West Bengal Assembly polls commencing from March 27. Highlight of the rally was the presence of Siddiqui, an influential cleric of the shrine of Furfura Sharif in Hooghly district. Following are the takeaways from the rally.

A Muslim alternative in mainstream politics in Bengal

Despite the state having a Muslim population of over 27 per cent (as per 2011 census), Muslim political outfits have never had much electoral success in the state. During the previous Left Front rule, there was not enough space for Muslim identity politics in the state.

In 2011, Siddiqullah Chowdhury – a prominent Muslim face – formed the Bengal branch of the Jamiat Ulema-e-Hind and got some success in the 2013 panchayat polls. He even contested the 2014 Lok Sabha elections from Basirhat as a candidate of Badruddin Ajmal’s AIUDF, but got only two percent votes. However, before the 2016 Assembly elections, Siddiqullah joined hands with the TMC and won the election. He was later made a cabinet minister. But his outfit could not become a force in mainstream politics.

By joining hands with ISF, the Left is trying to win the confidence and support of the Muslim community to strengthen the organisation and win more seats. In Bengal, a large number of Muslims have so far aligned with the ruling Trinamool Congress, mainly because of the approach of Chief Minister Mamata Banerjee towards the upliftment of the community. However, a section of the community was not happy with the TMC, who claimed that the ruling party considers them nothing but a vote bank. Cashing in on this sentiment, ISF decided to forge ties with the Left Front, which during its 34-year rule in Bengal never received the tag of using Muslims for its vote bank politics.

With ISF entering into the alliance, the TMC will run the risk of losing support of the Muslims. In 2019, the Left had lost its Hindu votes to the BJP and Muslim votes to the TMC. This will ensure that the Left retains its Muslim votes, thus putting the TMC in a tight corner.

BJP benefitting from the alliance?

The BJP is likely to gain the most by the alliance between the Left and ISF. The saffron party will now accuse them of Muslim appeasement, a charge it has already levelled against the ruling Trinamool Congress. Even if the alliance fails to dent the Muslim support base of the TMC, it is likely to result in polarisation of Hindu votes in BJP’s favour. The development will also help the Sangh Parivar pursue its agenda in the state more aggressively. On the other hand, Left’s traditional votes in Hindu dominated areas will largely shift towards the BJP. This will result in a more polarised election in the coming days. The Left Front in West Bengal always enjoyed the reputation of being a secular democratic party. The leaders believe that the Left never indulged in appeasement of any community to score political brownie points. So far, the Left has consistently attacked both the TMC and the BJP of indulging in “competitive communalism” and took pride in establishing its secular stance. However, by siding with ISF which is predominantly a religious party, the Left seems to have lost the tag of a secular party ahead of Assembly polls. Although some Left leaders say that ISF is not a religious fundamentalist organisation as it talks about the rights of Dalits, tribal and Other Backward Classes (OBCs), but a party formed by a Muslim cleric will have to go a long way to establish its secular credentials. The Left has, however, hurt the sentiments of Hindu and secular voters by forging ties with ISF.

The Left Front is often criticised for not giving enough importance and exposure to young leaders of the party, especially in West Bengal. During public meetings and rallies, senior and aged leaders always take the centre stage, not providing space to the young guns who were confined to singing songs and shouting slogans.

For a change, the Left allowed young leaders to share space with party’s old guards. SFI leader and JNUSU president Aishe Ghosh, leftist actor Badsha Moitra and were asked to speak during the rally and introduce the speakers. Even among the crowds, the presence of thousands of young Left workers were spotted, signaling a change in the party’s outlook towards young comrades.

Fissure with Congress out in the open

Although the ISF has finalised its alliance and seat-sharing agreement with the Left Front, it is yet to do the same with the Congress which is also a part of the United Alliance. In an unpleasant instance, state Congress president Adhir Chowdhury’s speech in yesterday’s rally was briefly interrupted when ISF founder Abbas Siddiqui went to the dais. Chowdhury was clearly affronted after CPM leaders Mohammad Salim and Biman Bose asked Siddiqui to speak to the crowd and ask them to come down. Surprised by the action, Chowdhury said he will not speak again and asked Siddiqui to speak. Sensing danger quickly, both Salim and Bose entered into a damage control mode and urged Chowdhury to continue. The entire conversation between them was caught on the microphone

Later, while addressing the crowd, Siddiqui announced its alliance with the Left and but stopped short in doing the same for the Congress. He said that he is not begging for seats but speaking for their rights. While speaking to reporters, Siddiqui asked Congress to make its stand clear on seat sharing arrangements with ISF.

After being flooded with Drishyam 3 stories, Jeethu Joseph has a request