Explained: Studies suggest why Omicron is less severe – it spares the lungs

In studies on mice and hamsters, omicron produced less-damaging infections, often limited largely to the upper airway: the nose, throat and windpipe. 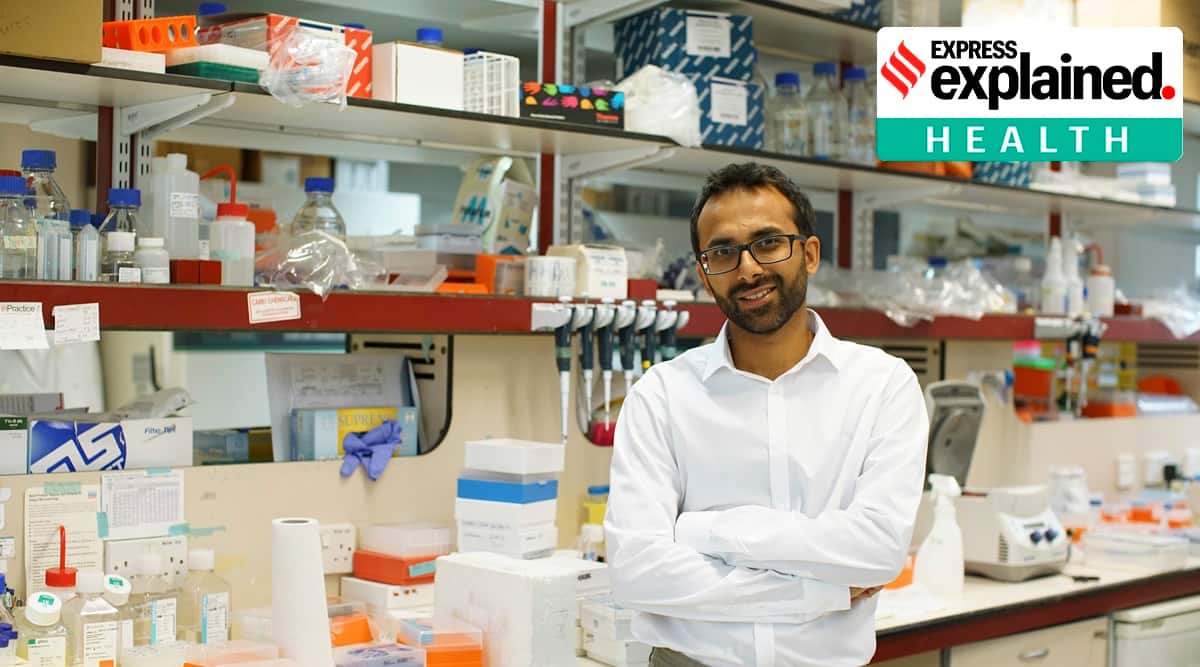 Ravindra Gupta, a virologist at the University of Cambridge, in London, Feb. 28, 2019. Compared with earlier variants, Omicron may have lost the ability to spread aggressively in the lungs, new animal research suggests. “I’ve always been struck by the fact that you can’t predict the behavior of virus from just the mutations,” he said. (Jane Stockdale/The New York Times)

A spate of new studies on lab animals and human tissues are providing the first indication of why the omicron variant causes milder disease than previous versions of the coronavirus.

In studies on mice and hamsters, omicron produced less-damaging infections, often limited largely to the upper airway: the nose, throat and windpipe. The variant did much less harm to the lungs, where previous variants would often cause scarring and serious breathing difficulty.

“It’s fair to say that the idea of a disease that manifests itself primarily in the upper respiratory system is emerging,” said Roland Eils, a computational biologist at the Berlin Institute of Health, who has studied how coronaviruses infect the airway.

In November, when the first report on the omicron variant came out of South Africa, scientists could only guess at how it might behave differently from earlier forms of the virus. All they knew was that it had a distinctive and alarming combination of more than 50 genetic mutations.

Previous research had shown that some of these mutations enabled coronaviruses to grab onto cells more tightly. Others allowed the virus to evade antibodies, which serve as an early line of defense against infection. But how the new variant might behave inside of the body was a mystery.

“You can’t predict the behavior of virus from just the mutations,” said Ravindra Gupta, a virus expert at the University of Cambridge.

Over the past month, more than a dozen research groups, including Gupta’s, have been observing the new pathogen in the lab, infecting cells in petri dishes with omicron and spraying the virus into the noses of animals.

As they worked, omicron surged across the planet, readily infecting even people who were vaccinated or had recovered from infections.

But as cases skyrocketed, hospitalizations increased only modestly. Early studies of patients suggested that omicron was less likely to cause severe illness than other variants, especially in vaccinated people. Still, those findings came with a lot of caveats.

For one thing, the bulk of early omicron infections were in young people, who are less likely to get seriously ill with all versions of the virus. And many of those early cases were happening in people with some immunity from previous infections or vaccines. It was unclear whether omicron would also prove less severe in an unvaccinated older person, for example.

Experiments on animals can help clear up these ambiguities, because scientists can test omicron on identical animals living in identical conditions. More than a half-dozen experiments made public in recent days all pointed to the same conclusion: Omicron is milder than delta and other earlier versions of the virus.

On Wednesday, a large consortium of Japanese and American scientists released a report on hamsters and mice that had been infected with either omicron or one of several earlier variants. Those infected with omicron had less lung damage, lost less weight and were less likely to die, the study found.

Although the animals infected with omicron on average experienced much milder symptoms, the scientists were particularly struck by the results in Syrian hamsters, a species known to get severely ill with all previous versions of the virus.

“This was surprising, since every other variant has robustly infected these hamsters,” said Dr. Michael Diamond, a virus expert at Washington University and a co-author of the study.

Several other studies on mice and hamsters have reached the same conclusion. (Like most urgent omicron research, these studies have been posted online but have not yet been published in scientific journals.)

The reason that omicron is milder may be a matter of anatomy. Diamond and his colleagues found that the level of omicron in the noses of the hamsters was the same as in animals infected with an earlier form of the coronavirus. But omicron levels in the lungs were one-tenth or less of the level of other variants.

A similar finding came from researchers at the University of Hong Kong who studied bits of tissue taken from human airways during surgery. In 12 lung samples, the researchers found that omicron grew more slowly than delta and other variants did.

The researchers also infected tissue from the bronchi, the tubes in the upper chest that deliver air from the windpipe to the lungs. And inside of those bronchial cells, in the first two days after an infection, omicron grew faster than delta or the original coronavirus did.

Coronavirus infections start in the nose or possibly the mouth and spread down the throat. Mild infections do not get much further than that. But when the coronavirus reaches the lungs, it can do serious damage.

Immune cells in the lungs can overreact, killing off not just infected cells but uninfected ones. They can produce runaway inflammation, scarring the lung’s delicate walls. What’s more, the viruses can escape from the damaged lungs into the bloodstream, triggering clots and ravaging other organs.

Gupta suspects that his team’s new data give a molecular explanation for why omicron does not fare so well in the lungs.

Many cells in the lung carry a protein called TMPRSS2 on their surface that can inadvertently help passing viruses gain entry to the cell. But Gupta’s team found that this protein does not grab on to omicron very well. As a result, omicron does a worse job of infecting cells in this manner than delta does. A team at the University of Glasgow independently came to the same conclusion.

Through an alternative route, coronaviruses can also slip into cells that do not make TMPRSS2. Higher in the airway, cells tend not to carry the protein, which might explain the evidence that omicron is found there more often than the lungs.

Gupta speculated that omicron evolved into an upper-airway specialist, thriving in the throat and nose. If that is true, the virus might have a better chance of getting expelled in tiny drops into the surrounding air and encountering new hosts.

“It’s all about what happens in the upper airway for it to transmit, right?” he said. “It’s not really what happens down below in the lungs, where the severe disease stuff happens. So you can understand why the virus has evolved in this way.”

While these studies clearly help explain why omicron causes milder disease, they do not yet answer why the variant is so good at spreading from one person to another. The United States logged more than 580,000 cases on Thursday alone, the majority of which are thought to be omicron.

Diamond said he wanted to wait for more studies to be carried out, especially in people instead of animals, before endorsing the hypothesis that TMPRSS2 is the key to understanding omicron. “I think it is still premature on this,” he said.

Scientists know that part of omicron’s contagiousness comes from its ability to evade antibodies, allowing it to easily get into cells of vaccinated people far more easily than other variants. But they suspect that omicron has some other biological advantages as well.

Last week, researchers reported that the variant carries a mutation that may weaken so-called innate immunity, a molecular alarm that rapidly activates our immune system at the first sign of an invasion in the nose. But it will take more experiments to see if this is indeed one of omicron’s secrets to success.

“It could be as simple as, this is a lot more virus in people’s saliva and nasal passages,” Cherry said. But there could be other explanations for its efficient spread: It could be more stable in the air or better infect new hosts. “I think it’s really an important question,” she said.