Explained: The state of Pakistan’s economy

🔴 Tweeting from a Pakistan embassy handle, a hacker recently flagged rising inflation in the country. A look at Pakistan’s current and impending economic crises, and what it has been doing to tide them over. 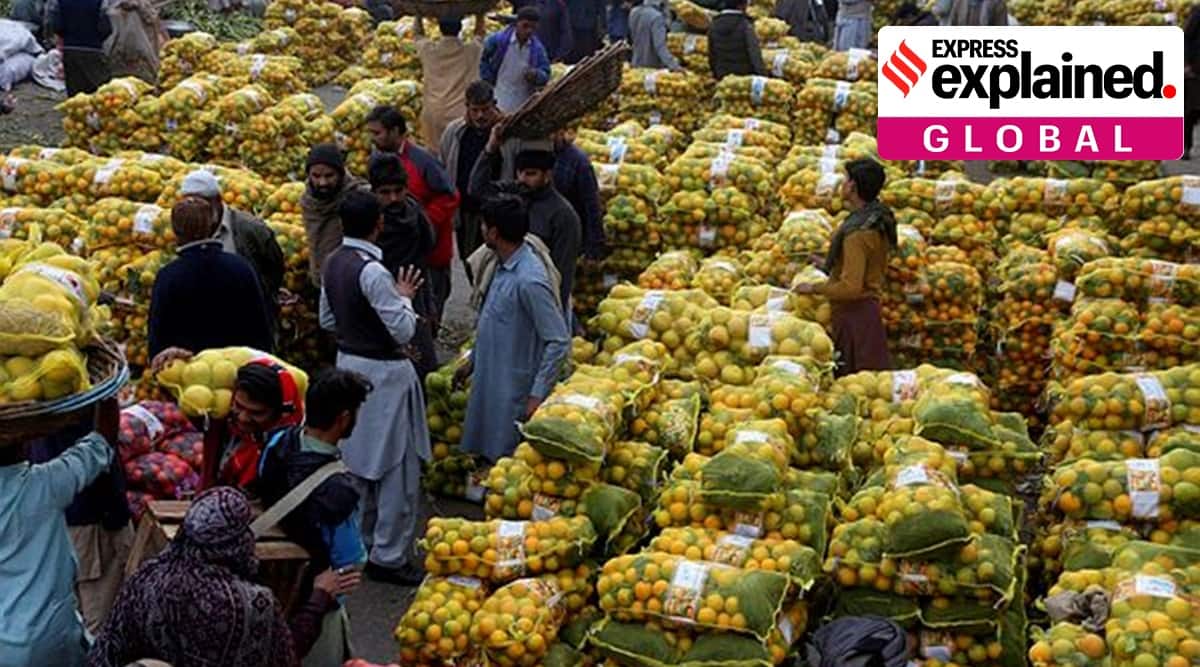 A hacker Friday posted a tweet from the official handle of the Pakistani embassy in Belgrade, claiming government officials had not been paid for three months amid galloping inflation, and mockingly asked Prime Minister Imran Khan if this was “Naya Pakistan” he had promised. The Foreign Office in Islamabad said the claim in the tweet was “baseless and unfactual”.

Pakistan’s GDP growth is projected to touch a 4-year high of 5% in the fiscal year ending June 2022 — at the same time, heightened inflationary risks and an imminent balance-of-payments crisis has the country teetering on the brink, dependent on external debt bailouts in order to stay afloat.

Also Read |‘Pakistan has not improved, but India has deteriorated’: Salman Rushdie

Pakistan has repeatedly run into macroeconomic crises: runaway inflation, current account and trade deficits, depleting foreign reserves, and currency devaluations. It is faced with a combination of these problems again.

The two immediate threats to the country’s $263-billion economy come from the build-up of inflationary pressures, and a payments crisis that stems from a combination of global and domestic factors — problems that the pandemic has exacerbated. The situation is similar to, and worse than, the crisis of 2018, when Pakistan’s foreign exchange reserves plummeted to multi-year low.

As of November 19, Pakistan’s entire liquid foreign reserves stood at $22.773 billion, according to the State Bank of Pakistan (SBP), the country’s central bank. Of this, $16.254 billion was held by the SBP; the remainder was with commercial banks. The SBP’s reserves declined by $691 million during the week ended November 19, primarily on account of external debt repayments, Geo News reported.

Pakistan’s annual economic growth in calendar year 2018 was 5.8%, but fell to 0.99% a year later, and further to 0.53% in 2020, according to the World Bank. This has led to a building-up of deficit on the current account — which captures the difference between a country’s import and export of goods and services, and includes net transfers such as foreign aid, over a designated period.

A persistently high deficit can potentially lead to an excess supply of a country’s currency in its foreign exchange market, which eventually negatively impacts the value of the currency — this is a reason why the Pakistani rupee has been in a tailspin.

As growth fell and debt services obligations mounted, the country, like several times in the past, has been faced with a potential balance-of-payments crisis. A BoP crisis is triggered when a country is unable to finance its import bills or service its external debt. Pakistan imports most items of domestic consumption, making it more vulnerable to these pressures; the increasing debt servicing obligations have added to the pressure.

In 2019, Pakistan sought a rescue lifeline from the IMF, like it has 13 times over the last four decades. In exchange for a $6 billion funding package, Pakistan had to commit to structural reforms and reducing public debt. But the funding plan stalled earlier this year over issues related to reform commitments, and an agreement could be reached only on November 22.

“The Pakistani authorities and IMF staff have reached a staff-level agreement on policies and reforms needed to complete the sixth review,” the IMF said in a statement that day. Once the review is complete, 750 million in IMF special drawing rights (around $1 billion) will be available to Pakistan, taking total disbursements to about $3 billion.

That same day, Shaukat Tarin, who is equivalent to Pakistan’s finance minister, pledged to undertake four other actions: withdrawal of tax exemptions and subsidies, an increase in levy on petro products, higher power tariffs, and an audit of some $1.4 billion in “extra funds” lent to Pakistan in April 2020 in view of the pandemic.

Opinion |Faizan Mustafa writes: Why Pakistan’s blasphemy legislation has no basis in law or religion

Pakistan’s government bonds reacted the day the deal was finalised, jumping between 1.3 and 2.8 cents on the US$, their best day in over a year, according to Reuters data.

Under the new arrangement, the $3 billion from the Saudi government would remain in the SBP’s deposit account for a year, Geo News reported. It quoted Muzammil Aslam, Spokesperson for the Prime Minister Finance Advisor, as saying Pakistan was expecting to get $7 billion from three sources over the next 60 days, including $3 billion in deposits from Saudi Arabia, a $1.2 billion Saudi Oil Facility with deferred payments, a $800 million Islamic Development Bank oil facility. All of these dollar inflows, he said, would be sufficient to alleviate pressure on the country’s import bills. But the loan deal with Saudi Arabia comes with extremely stringent conditions, including record high interest rates of nearly 4%, default clauses that are near draconian, and restrictions on the legal recourse Pakistan will have against any Saudi claim.

Pakistan’s record inflation is pushing up the price of daily staples amid mounting threats of unrest, according to media reports. Headline inflation reached 11.5% in November, up from 9.2% in October.

According to the Chairperson of the Consumer Association of Pakistan, Kaukab Iqbal: “The rising prices of food items, particularly fresh fruits, milk, and chicken are having a major impact on the livelihoods and nutrition levels of all families. But much of the burden of this falls on the poor as higher prices put protein and vitamin-rich foods out of their reach.”

While inflation is also driven by global commodity prices, regressive domestic policies have not helped matters either, with Islamabad having “systematically penalised the production of high-value products by focusing support on wheat and sugarcane”, according to the World Bank paper authored by Daud Khan, Namash Nazar and Willem Janssen. As a result, Pakistan remains an importer of horticultural products, dairy products despite having a massive number of animals producing below potential, and cotton to feed the domestic textile industry, the authors noted.

As far as balance of payments is concerned, Pakistan’s current account deficits in September and October have been way larger than anticipated, reflecting both rising oil and commodity prices and improving domestic demand. The burden of adjusting to these external pressures, as the SBP’s Monetary Policy Statement in November noted, has largely fallen on the rupee. The balance of risks has shifted away from growth and towards inflation and the current account faster than expected.

Pakistan is expected to grow about 5% in fiscal year 2021-22 (July-June annual cycle), SPB governor told CNBC Reza Baqir on November 24. “This is a four-year high and this growth is reflected in robust and brisk demand of even non-energy imports in Pakistan,” he said.

In September, Fitch Solutions had projected growth of 4.2% in the year ending July 22, much lower than Baqir’s estimate. His assertions are also more optimistic than the government’s target of 4.8%.

On November 24, the SBP raised its policy rate by 150 basis points to 8.75%, stating that “risks related to inflation and the balance of payments have increased while the outlook for growth continued to improve{. The bank also lifted the cash reserve requirement for commercial banks by one percentage point, the first such move in over a decade.

But Baqir has asserted the government has to do more to bring down inflation, including actions to ensure “there’s no hoarding or price speculation for basic commodities”.