Explained: How an MP is suspended from Lok Sabha by the Speaker

The general principle is that it is the role and duty of the Speaker of Lok Sabha to maintain order so that the House can function smoothly. This is a daunting task even at the best of times. BJP MP Meenakshi Lekhi in the Speaker chair conducts proceedings in the Lok Sabha during the Budget Session of Parliament on Thursday. The seven Congress members will remain suspended for the remainder of the Budget session, which ends on April 3. (PTI)

Seven Congress members were suspended on Thursday (March 5) for unruly behaviour in the Lok Sabha. The motion was passed by a voice vote.

What is the reason for suspending an MP?

The general principle is that it is the role and duty of the Speaker of Lok Sabha to maintain order so that the House can function smoothly. This is a daunting task even at the best of times.

In order to ensure that proceedings are conducted in the proper manner, the Speaker is empowered to force a Member to withdraw from the House (for the remaining part of the day), or to place him/her under suspension.

What are the rules under which the Speaker acts?

Rule Number 373 of the Rules of Procedure and Conduct of Business says: “The Speaker, if is of the opinion that the conduct of any Member is grossly disorderly, may direct such Member to withdraw immediately from the House, and any Member so ordered to withdraw shall do so forthwith and shall remain absent during the remainder of the day’s sitting.”

To deal with more recalcitrant Members, the Speaker may take recourse to Rules 374 and 374A. Rule 374 says:

“(1) The Speaker may, if deems it necessary, name a Member who disregards the authority of the Chair or abuses the rules of the House by persistently and wilfully obstructing the business thereof.

“(3) A member suspended under this rule shall forthwith withdraw from the precincts of the House.” 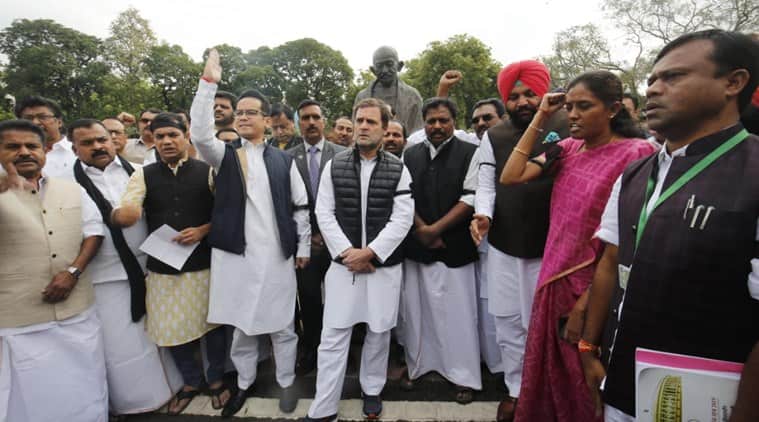 Congress MPs protest the suspension of its leaders from Lok Sabha, at Parliament House, on Friday. (Express Photo: Anil Sharma)

This clause was incorporated in the Rule Book on December 5, 2001. The intention was to skirt around the necessity of moving and adopting a motion for suspension.

According to Rule 374A: “(1) Notwithstanding anything contained in rules 373 and 374, in the event of grave disorder occasioned by a Member coming into the well of the House or abusing the Rules of the House persistently and wilfully obstructing its business by shouting slogans or otherwise, such Member shall, on being named by the Speaker, stand automatically suspended from the service of the House for five consecutive sittings or the remainder of the session, whichever is less: Provided that the House may, at any time, on a motion being made, resolve that such suspension be terminated.

“(2) On the Speaker announcing the suspension under this rule, the Member shall forthwith withdraw from the precincts of the House.”

What is the procedure for revocation of a Member’s suspension?

While the Speaker is empowered to place a Member under suspension, the authority for revocation of this order is not vested in her. It is for the House, if it so desires, to resolve on a motion to revoke the suspension.

What happens in Rajya Sabha?

Like the Speaker in Lok Sabha, the Chairman of the Rajya Sabha is empowered under Rule Number 255 of its Rule Book to “direct any Member whose conduct is in his opinion grossly disorderly to withdraw immediately” from the House.

“…Any Member so ordered to withdraw shall do so forthwith and shall absent himself during the remainder of the day’s meeting.”

The Chairman may “name a Member who disregards the authority of the Chair or abuses the rules of the Council by persistently and wilfully obstructing” business. In such a situation, the House may adopt a motion suspending the Member from the service of the House for a period not exceeding the remainder of the session.

The House may, however, by another motion, terminate the suspension.

Unlike the Speaker, however, the Rajya Sabha Chairman does not have the power to suspend a Member. 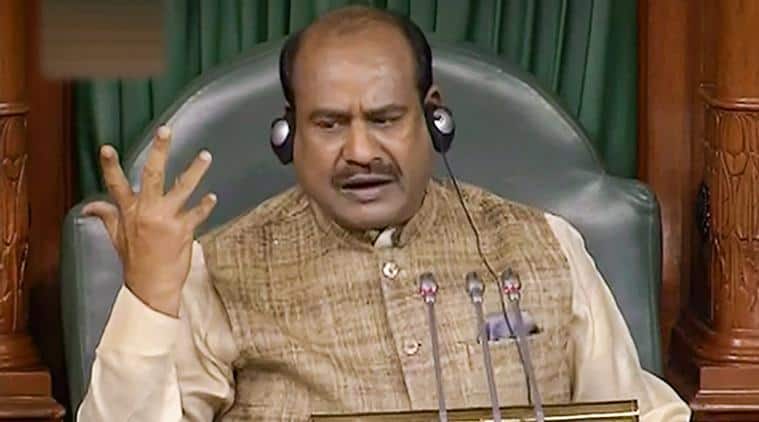 Is suspending an MP a common practice in Parliament?

In November last year, Speaker Om Birla suspended two Congress Members. And in January 2019, Birla’s predecessor in the Speaker’s Chair, Sumitra Mahajan, suspended a total 45 Members belonging to the TDP and AIADMK after they continuously disrupted proceedings for days.

On February 13, 2014, then Speaker Meira Kumar suspended 18 MPs from (undivided) Andhra Pradesh following pandemonium in the House. The suspended MPs were either supporting or opposing the creation of the separate state of Telangana.

The House witnessed unprecedented scenes that day. L Rajagopal, an expelled Congress Member, had used pepper spray in the House. A Telugu Desam Member, M Venugopala Reddy, had smashed a mike. The suspended Members belonged to the Congress, Telugu Desam and YSR Congress.

Before that, on September 2, 2014, nine Members were suspended for five days.

On March 15, 1989, when Rajiv Gandhi was Prime Minister, as many as 63 Members were suspended from the Lok Sabha for three days.

Isn’t the barring of an elected representative of the people an extreme step to take in order to curb unruly behaviour?

A balance has to be struck. There can be no question that the enforcement of the supreme authority of the Speaker is essential for smooth conduct of proceedings. However, it must be remembered that her job is to run the House, not to lord over it.

The solution to unruly behaviour has to be long-term and consistent with democratic values. A previous Speaker had ordered that television cameras be focussed on the demonstrating members, so that people could see for themselves how their representatives were behaving in the House.

Don’t miss from Explained: Why has EPFO cut interest rate to 8.5%? How will you be impacted?

A step in that same direction could be to discontinue the practice of herding people out of the visitors’ gallery when the House witnesses chaos. It has been suggested that it may perhaps be a good idea to let them be — and to also reserve a few blocks in the gallery for schoolchildren, who could see for themselves the conduct of Members.

What cannot, however, be denied is that Speakers’ actions are often dictated more by expediency and the stand of the party that they belong to, rather than by the Rules and principles.

So, the ruling party of the day invariably insists on the maintenance of discipline, just as the Opposition insists on its right to protest. And their positions change when their roles flip.

Toilet paper to condoms, unusual things people are stockpiling globally due to the coronavirus