Sources in the Shiv Sena said MLA Pratap Sarnaik's letter has put Chief Minister Uddhav Thackeray in a tight spot. Is it a harbinger of trouble in the MVA alliance? 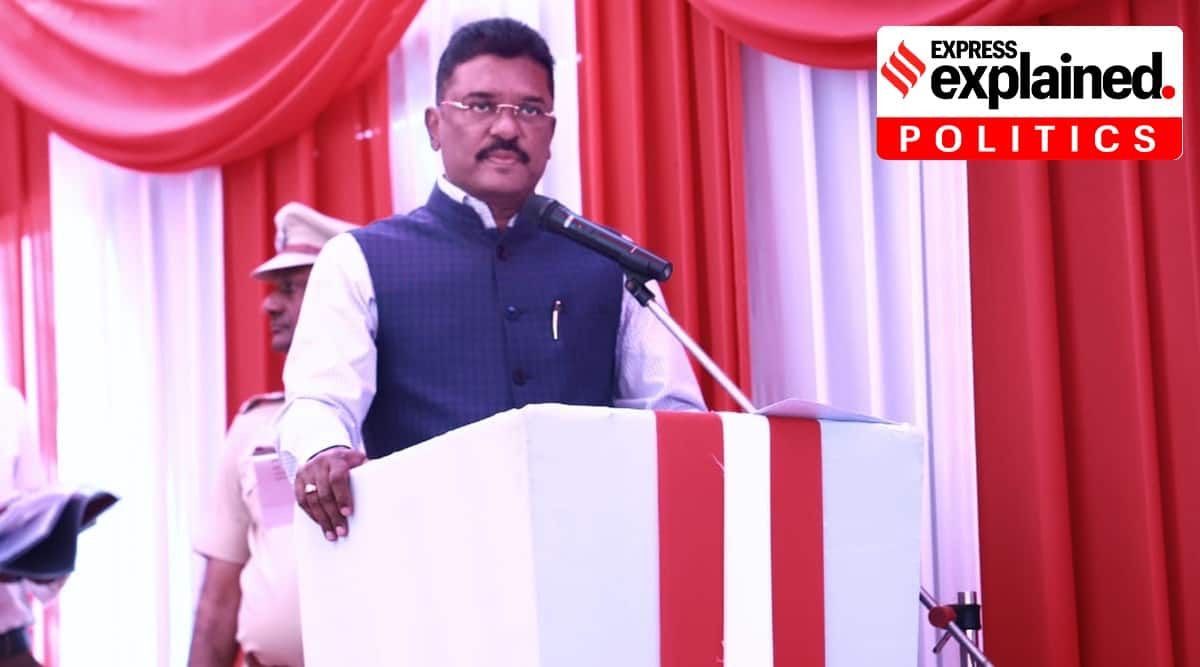 Pratap Sarnaik, 57, is a three-term Shiv Sena legislator from the Ovala-Majiwada Assembly seat in Thane and party in-charge of Mira-Bhayander. (Twitter: @PratapSarnaik)

Shiv Sena MLA Pratap Sarnaik, who is being investigated by the Enforcement Directorate (ED) in connection with an alleged Rs 175-crore money laundering case, recently wrote a letter to Maharashtra Chief Minister Uddhav Thackeray requesting him to patch up with the BJP to save Sena leaders from being harassed by central agencies. The legislator also accused the Congress and NCP of working against the interests of the Sena.

The Indian Express explains why Sarnaik has written such a letter, and what it means for the future of the Maharashtra Vikas Aghadi alliance.

Who is Pratap Sarnaik?

Pratap Sarnaik, 57, is a three-term Shiv Sena legislator from the Ovala-Majiwada Assembly seat in Thane and party in-charge of Mira-Bhayander. Last September, he was named spokesperson by party chief Uddhav Thackeray. Sarnaik, an autorickshaw driver in the 1980s in Thane, is a big player in the city’s real estate scene through his Vihang Group of Companies, which also runs hospitality businesses in and around Thane and Mumbai.

Last year, Sarnaik had been vocal against the BJP over several issues, including seeking a re-investigation into the suicide of interior designer Anvay Naik, who left a note accusing Republic TV editor-in-chief Arnab Goswami and two others of not clearing his dues. He had also moved a breach of privilege motion in the Legislative Assembly against Goswami, accusing him of using “derogatory language” and making baseless remarks against Thackeray and NCP president Sharad Pawar, and taken on actor Kangana Ranaut for comparing Mumbai with Pakistan-occupied Kashmir.

In November 2020, ED raided Sarnaik’s residence and office in connection with an alleged Rs 175-crore money laundering case and has been investigating Sarnaik’s role in the case.

What does his letter written to CM and Shiv Sena chief Uddhav Thackeray say?

Sarnaik, in his letter dated June 9, stated that in spite of being in an alliance with us, the Congress and NCP are weaning away our workers and weakening the Shiv Sena. “In my personal opinion, it is imperative that we patch up with Honourable Prime Minister Narendra Modi. A lot of our supporters feel that by doing so the harassment that Pratap Sarnaik, Anil Parab and Ravindra Waikar and their families are facing will stop,” he stated.

He further said that the central agencies were unnecessarily harassing them. “I have been fighting a legal battle over the last seven months even when he had no support from the state government or any other leader,” said the Sena legislator further suggesting to patch up with BJP for municipal corporation polls of Mumbai, Thane and others to be held early next year.

Sarnaik also mentioned that many Shiv Sena legislators feel that despite Sena having its chief minister, the works proposed by Congress and NCP legislators get immediate approvals while the Sena legislators do not get the same treatment for their proposals.

Which other Sena leaders are facing allegations of corruption?

Shiv Sena leader and Transport Minister Anil Parab has been embroiled in a controversy over corruption allegations levelled by the arrested Mumbai Police officer Sachin Waze. In April, Waze, in a letter he tried to submit to the NIA court, alleged that Parab told him to initiate talks with a city-based trust to get Rs 50 crore to close an inquiry. Waze has also alleged that Parab asked him to inquire into the list of fraudulent contractors in the BMC and to collect “at least Rs 2 crore” from about 50 such contractors. However, Parab has denied all the allegations terming it baseless and alleged that it is a conspiracy hatched by BJP to defame him.

In March, BJP leader Kirit Somaiya had accused Thackeray and Shiv Sena legislator Ravindra Waikar of allegedly misusing their positions to purchase some properties in Alibaug, which were then transferred in the names of their wives Rashmi Thackeray and Manisha Waikar. Somaiya claimed architect Anvay Naik constructed these properties in 2008-09 and Thackeray and Waikar had purchased them from him in 2014. Somaiya also made other allegations against Waikar over non-disclosure of assets pertaining to two other properties in the state.

Meanwhile, Waikar and his wife Manisha filed civil defamation suits in Bombay High Court against Somaiya and sought over Rs 100 crore as damages stating that Somaiya made “defamatory” and “baseless” allegations against them.

What next after the Sarnaik letter?

The leader further said Sarnaik’s letter has also highlighted the communication gap within the party. “By stating that he has been fighting a legal battle without any support from government or any leader, it has indirectly pointed fingers at the party leadership for not standing behind him or extending any support to him. He has also indirectly raised questions on the CM’s style of functioning stating that Sena legislators’ works are not getting immediate approvals in Shiv Sena-led government,” the leader added.

Also in Explained |Why BSP is unravelling, and what it may mean in 2022 Uttar Pradesh polls

Is the letter a harbinger of trouble in the MVA alliance?

There has been unease in the alliance over statements being made by Congress leaders. Last week, state Congress president Nana Patole had announced his party will contest the next Assembly elections alone. The Congress is an alliance partner of the Maha Vikas Aghadi government led by Uddhav Thackeray.

Addressing Sainiks at the party’s foundation day programme, Thackeray responded that the Shiv Sena can also give a slogan “go solo”, but this is not the time for politics. Thackeray’s statement was seen as a strong message to allies that it would not bow down to any pressure from allies.

Even as Congress, which is junior partner in MVA, and Shiv Sena have engaged in a war of words over several issues, the Sena and NCP have maintained cordial relations so far. Like Thackeray, NCP chief Sharad Pawar, during the party’s foundation day event on June 10, took a similar stand and said the MVA government will last for five years and the allies will also contest the Lok Sabha and Assembly elections together in 2024.