Former journalist Isudan Gadhvi joined the Aam Aadmi Party last year and was among the first influential figures to join the party in Gujarat as it made a debut in BJP’s stronghold for 27 years. 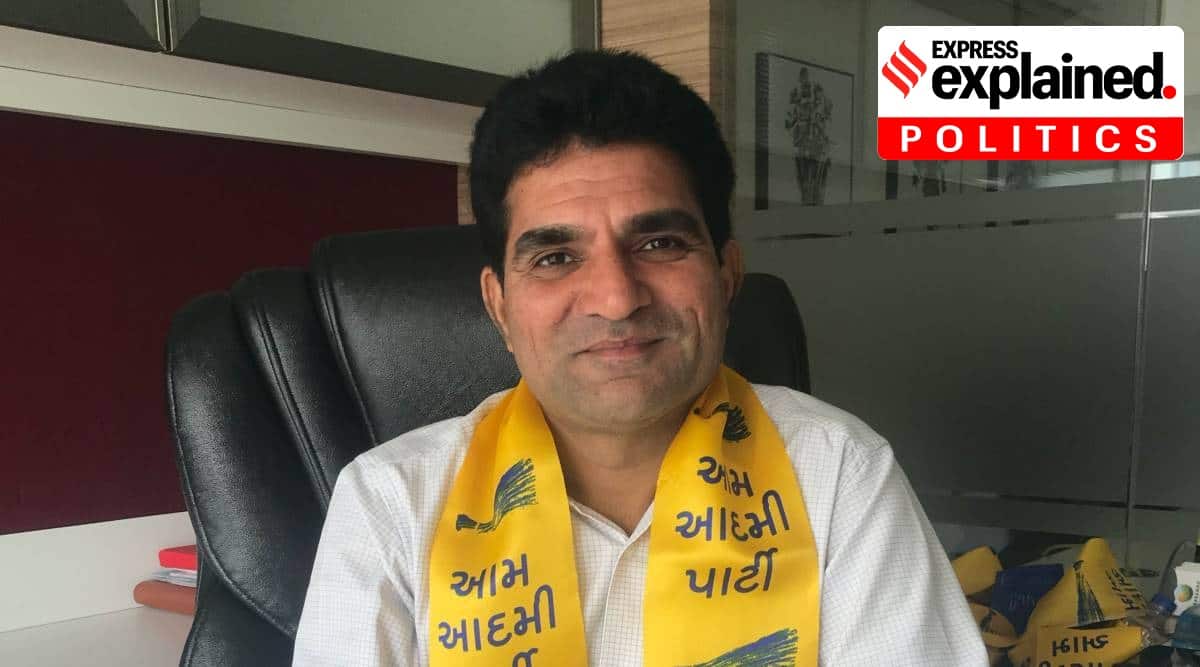 Gadhvi joined politics in 2021 and has claimed BJP, Congess and AAP all invited him to join the respective parties. (Express Photo)

Last week, Kejriwal urged people to contact the party through SMS, WhatsApp, voice mail and e-mail to give their views about who should be the CM candidate from the party in the state for the elections, due to be held in two phases – on December 1 and 5.

Express Interview |AAP CM candidate Isudan Gadhvi: ‘They’ve held only security guards (for Morbi)… (In an AAP govt) if a minister was to blame, even he would go to jail’

After the announcement, Gadhvi embraced party colleagues Manoj Sorathiya and Yuvrajsinh Jadeja and got down the stage to seek the blessings of his mother. In a tweet, he thanked Kejriwal and the people of Gujarat.

Born to a farmer in Pipaliya village of Dwarka district in Gujarat on January 10, 1982, Isudan Gadhvi belongs to the community of other backward classes.

He graduated from Gujarat Vidyapeeth, Ahmedabad in 2005 where he pursued a Master’s degree in Journalism and Mass Communication and then worked as a journalist. He began working with Doordarshan and started as a field journalist in Porbandar with ETV Gujarati from 2007 to 2011.

Gadhvi’s reporting helped bring focus on a 150-crore illegal deforestation scam in the Dang and Kaprada districts of the state, and the Gujarat government subsequently took action in the case. His reporting on farmers’ issues helped earn him a substantial following in rural areas.

In 2015, Gadhvi joined the Gujarati TV channel VTV as a prime-time show anchor. In his show called Mahamanthan, Gadhvi discussed national and state issues with panellists in the studio, as well as with the public via ‘phone-ins’ and organised debates. At VTV, he went on to become the youngest channel head in the regional media. He quit as the channel’s editor last year to join the AAP.

Isudan Gadhvi: What has his career in politics been like?

The former journalist joined the Aam Aadmi Party on June 14, 2021, in presence of Arvind Kejriwal. He was among the first influential figures to join the party in Gujarat as AAP made a debut in BJP’s stronghold for 27 years.

Gadhvi began his foray into politics when he joined AAP last year. He was made the AAP’s national joint general secretary after his inclusion in the party. Gadhvi told The Indian Express. “I wanted to work for the people, so I left my job as a journalist… I was approached by all three – the BJP, Congress and AAP. Then, one day Arvindji invited me to meet him… I joined AAP so that I can work on my own for the people. I am satisfied with the work I am doing at AAP. There are no differences in the party. I was impressed by Kejriwal’s work in Delhi.”

Last month Gadhvi launched a yatra titled “Bas, Havey Parivartan Joiyiye” (enough, now we need a change) from Dwarka district. It is due to conclude on November 20, after covering 67 constituencies.