While Pyongyang has made no mention of the anniversary, Seoul has been looking to push for and renew cooperation. 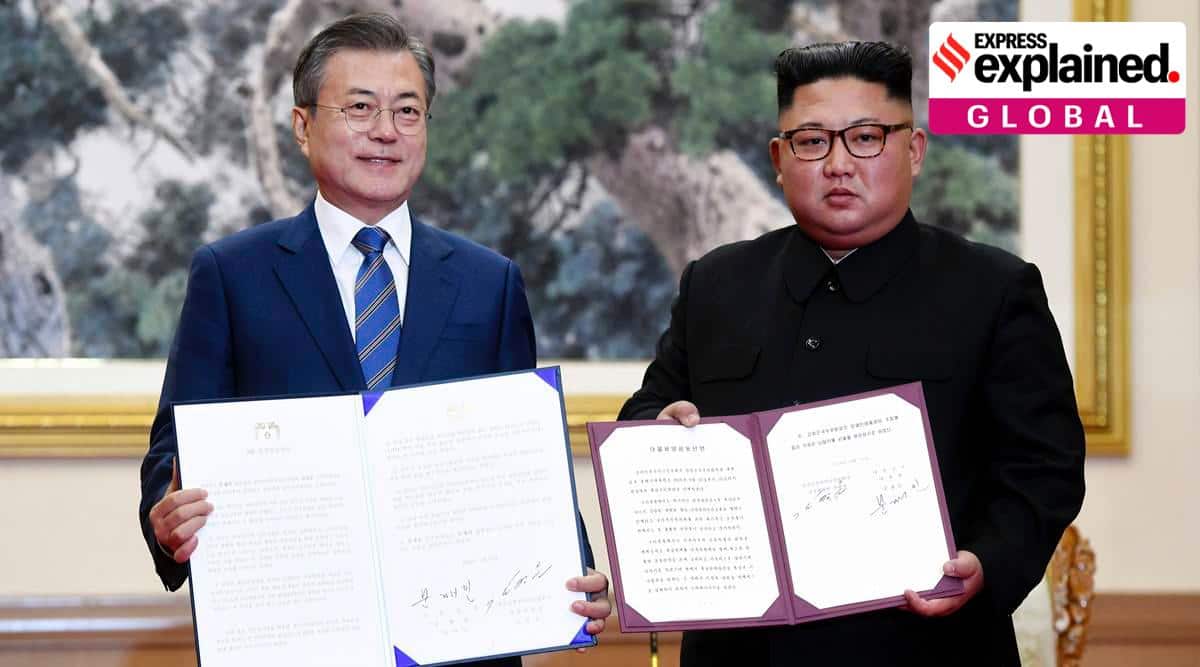 Two years since North Korea and South Korea signed the Pyongyang Joint Declaration on September 19, which focused on diffusing military tensions between the two countries, among other issues, Seoul and Pyongyang have found themselves in a diplomatic deadlock with no progress in denuclearisation talks between North Korea and the US.

While Pyongyang has made no mention of the anniversary, Seoul has been looking to push for and renew cooperation. At Panmunjom, on the border between the two countries, South Korea’s Unification minister Lee In-young urged North Korea to abide by the 2018 agreement, The Korea Herald reported.

What is the Pyongyang Joint Declaration?

The Pyongyang Joint Declaration is an agreement signed by North Korea’s leader Kim Jong Un and South Korea’s President Moon Jae-in on September 18, 2018 during the Inter-Korean Summit Meeting in Pyongyang. Some, although not all, long-standing issues between the two countries were addressed in this agreement. The two sides agreed to implement the Panmunjeom Declaration that had been signed in April that year and agreed to closer communication to prevent military clashes along the DMZ.

Economic cooperation was also a part of the agenda, with both countries agreeing to normalize the Gaeseong industrial complex located near the border and the Mt. Geumgang Tourism Project, located in North Korean territory, that involved creating a special joint tourism zone. The two countries also agreed on cooperation in the field of public health care, particularly in context of epidemics and the implementation of emergency measures to prevent and control the spread of contagious diseases.

For ordinary families separated following the Korean War and the division of the peninsula, family reunions on both sides of the border have a long-standing concern. The agreement made provisions for the resolution of this issue with both countries agreeing to the establishment of a permanent facility in the Mt. Geumgang area, to enable separated families to meet and to create methods of communication between them through inter-Korean Red Cross initiatives.

At the time of the agreement, the two countries had also agreed to promote cultural exchanges and cooperation and had agreed to actively participate together in the 2020 Summer Olympic Games and other international games. There were also plans to bid for the two to jointly host the 2032 Summer Olympic Games.

The agreement also focussed on the denuclearization of the Korean Peninsula with North Korea agreeing to permanently dismantle the Dongchang-ri missile engine test site and launch platform. At that time, Pyongyang had offered to implement additional measures, including the permanent dismantlement of nuclear facilities in Yeongbyeon, North Korea.

Don’t miss from Explained | Indus Water Treaty at 60: why there is a need to give it a fresh look

What happened after the agreement was signed?

Days after the signing of the agreement, troops from North Korea and South Korea began clearing some of the approximately 800,000 landmines buried along their border, with plans to remove guard posts and weapons from the DMZ. Loudspeakers on South Korea’s side that were used to blast anti-North Korean messages, propaganda and on occasion, K-pop songs, were also taken down.

In October 2018, the first meeting between North and South Korean officials took place at the Inter-Korean Liaison Office in Kaesong, that had been set up earlier that year to serve as a de facto embassy between the two countries, in absence of official diplomatic relations.

What has happened since Pyongyang Joint Declaration?

If 2018 seemed like the year inter-Korean relations had improved, that began to change following the DPRK-US Summit in Hanoi in 2019, when talks between Washington and Pyongyang abruptly fell through. Relations further deteriorated in the summer of 2020, when Pyongyang started warning Seoul to prevent North Korean refugees and activists in South Korea from sending balloons, along with rice and anti-North Korea propaganda, across the border into North Korea.

For Pyongyang, the issue was more serious than may have originally appeared because refugees and activists have been engaging in these activities for years. Kim Yo Jong, sister of North Korea’s leader and Kim Yong Chol, Vice Chair of the Central Committee of the ruling Workers’ Party of Korea, had both singled out this issue according to state media outlets, hinting that relations between the two countries would deteriorate if Seoul did not take any action.

Just days after these warnings had come from Pyongyang, North Korea blew up the Inter-Korean Liaison Office in Kaesong. Since January this past year, the building had been empty and there were no casualties.

Although there are no official confirmations from Pyongyang, experts say it is unlikely that North Korea has not been impacted by the Covid-19 pandemic. Ahead of the two-year anniversary of the agreement, South Korea’s Unification minister Lee In-young called for cooperation between the two countries in dealing with the public health crisis. According to The Korea Herald, Lee said the South Korean government also has plans to resume suspended tours of Panmunjom and the DMZ Peace Trail and initiate the reunion of separated families.