Explained: Why Myanmar’s Aung San Suu Kyi has been sentenced to 4 years in jail

The incitement charge stems from statements made on Facebook pages of Suu Kyi's party after she was detained by the military, following a coup that prevented her from starting a second term in office. 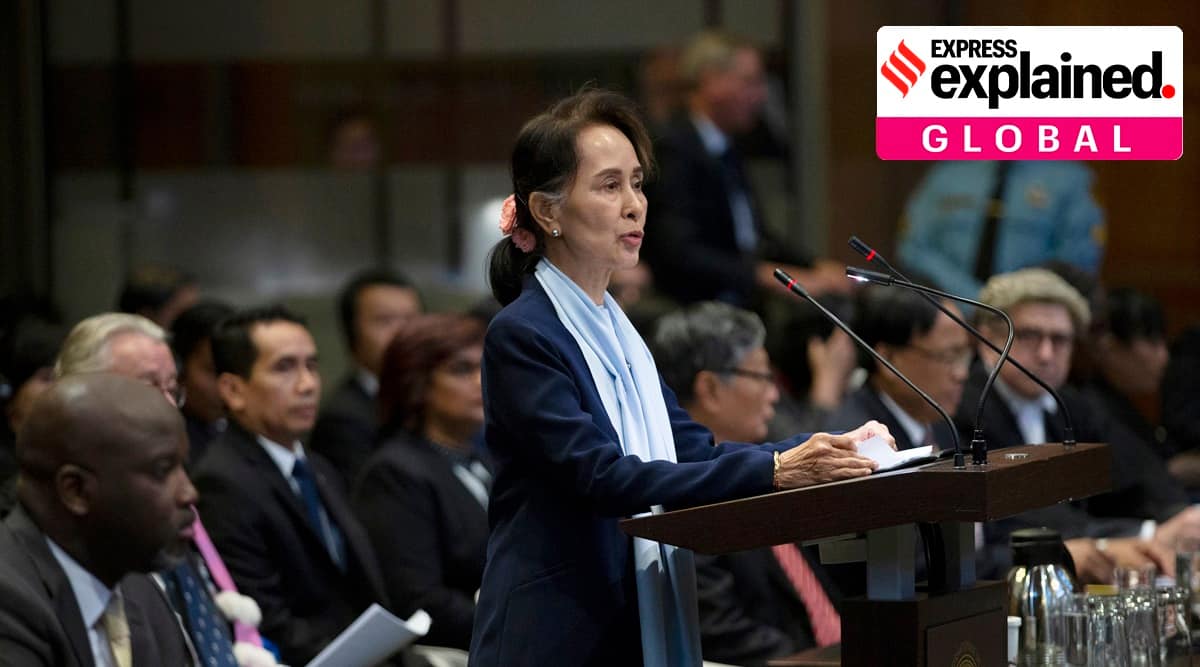 Myanmar's ousted leader Aung San Suu Kyi is facing a total of 11 charges which can bring in a maximum imprisonment of 102 years. (AP/File Photo)

The judgment is the first in a series of cases against the National League for Democracy leader following the junta’s overthrow of her government. The 76-year-old Nobel Peace Prize laureate is facing a total of 11 charges which can bring in a maximum imprisonment of 102 years.

Why has the court sentenced Suu Kyi to four years in prison?

Suu Kyi has been found guilty on two charges — of inciting the public against the military and breaching the Covid-19 protocols in the country.

The incitement charge stems from statements made on Facebook pages of Suu Kyi’s party after she was detained by the military, following a coup that prevented her from starting a second term in office.

The charge holds anyone who spreads false or inflammatory information that could disturb public order liable. While the prosecution submitted statements posted on the Facebook page of NLD party as evidence, her Defence lawyers argued that Suu Kyi and her co-defendant, former president Win Myint, could not be held responsible for the statements because they were already in detention. These posts criticised the government overthrow and suggested in broad terms that it be resisted, according to news agency AP.

The hearing for the incitement charge and the breaching of coronavirus protocols, which was held behind closed doors in Naypyitaw, Myanmar’s capital, was earlier postponed by the court without an explanation. However, this week, it allowed a defence witness to give testimony in a separate charge for breaching Covid rules by Suu Kyi.

Both counts of breaching Covid protocols stem from a 2020 election campaign in which Suu Kyi waved to her supporters in vehicles, while wearing a face mask and face shield, according to The New York Times.

Judgment in the second charge is reserved for December 14, in which Suu Kyi faces up to three years in imprisonment.

Suu Kyi is being tried in several other cases including four separate corruption charges over the alleged acceptance of bribes and abusing her power for favourable property deals. Another case covers the alleged use of unlicensed walkie-talkies by her security guards.

She is also being tried for violating the Official Secrets Act, along with jailed Australian economist Sean Turnell.

A fifth corruption charge was also filed against the Myanmar leader, though its trial is yet to begin. A sixth corruption case was brought against Suu Kyi by the junta recently, accusing her and Win Myint of corruption in granting permits to rent and buy a helicopter.

Earlier, Phil Robertson, Deputy Asia Director, Human Rights Watch, had said in a statement that the charges Suu Kyi faced “are bogus, and politically motivated” and “should be dropped, resulting in her immediate and unconditional release”.

Suu Kyi’s detention has sparked protests across Myanmar, demanding her release. Anti-military protests on Saturday in Yangon against the overthrow of the elected government resulted in at least five deaths and 15 arrests.

The junta has alleged that Suu Kyi won the election through massive voter fraud — a charge denied by the leader as well as previous election commission and international monitors.