Explained: Malaria and the vaccine hunt

WHO has allowed widespread use of the world’s first malaria vaccine, which has reduced disease as part of a pilot project in parts of Africa. But its efficacy is modest, and the hunt for newer vaccines continues. 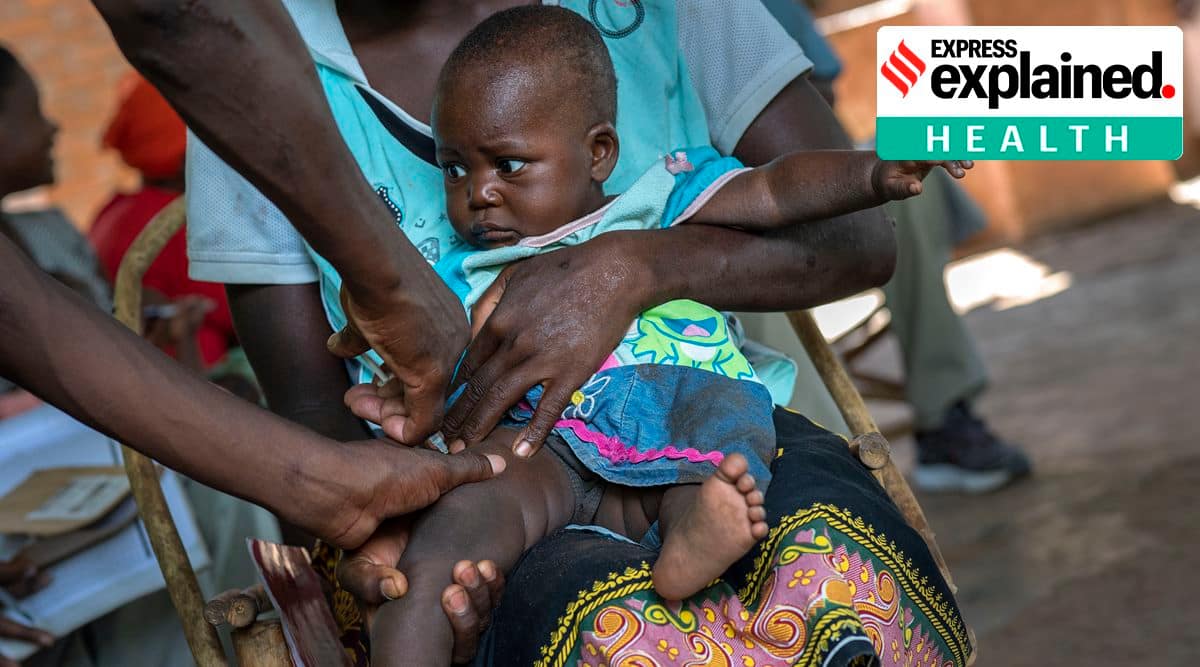 A baby from the Malawi village of Tomali is injected with the world's first vaccine against malaria in a pilot programme. (AP Photo/Jerome Delay, file)

The World Health Organization (WHO) on Wednesday allowed “widespread use” of the world’s first vaccine against malaria, a common mosquito-borne disease that claims more than four lakh lives every year. Developed by GlaxoSmithKline (GSK), the vaccine, known as RTS,S/AS01, has already been administered to nearly 8 lakh children in Ghana, Kenya and Malawi as part of a pilot programme since 2019.

The WHO endorsement paves the way for its use outside the pilot programme, in all areas where malaria is widely prevalent. But RTS,S/AS01, known by its brand name Mosquirix, is considered only the first step towards effective immunisation of the global population. RTS,S/AS01 is able to prevent severe cases in only 30% of cases; the quest for more effective vaccines is still underway.

Why is a vaccine against malaria important?

Malaria is one of the deadliest diseases in human history, having claimed millions of lives. Even today, it kills over four lakh every year, according to WHO. This is still a huge improvement from 20 years ago, when close to twice this number were dying of the disease.

Malaria is most endemic in Africa, with Nigeria, Congo, Tanzania, Mozambique, Niger and Burkina Faso together accounting for over half the yearly deaths.

In the last few years, significant progress has been made in reducing its impact. A few countries have also been able to eliminate malaria, mainly through spray of insecticides to kill mosquitoes, and cleaning up areas where mosquitoes breed. In the last 20 years, 11 countries have been declared by WHO as malaria-free, after zero cases were recorded in these countries for three consecutive years. These include the United Arab Emirates, Morocco, Sri Lanka and Argentina. In 2019, 27 countries reported less than 100 cases. Two decades ago, only six countries had less than 100.

India is one of the countries badly affected by the disease. Although deaths due to malaria have come down sharply in the last few years — officially these are only in hundreds now —infections continue to be in millions.

What is the vaccine that has been cleared for widespread use?

RTS,S/AS01 is the result of a partnership between GlaxoSmithKline and the global non-profit PATH’s Malaria Vaccine Initiative, with grant funds from the Bill & Melinda Gates Foundation. It is a recombinant protein vaccine, which means it includes DNA from more than one source. It targets a protein called circumsporozoite in Plasmodium falciparum — the deadliest malaria parasite globally and the most prevalent one in Africa. It offers no protection against P vivax malaria, which predominates in many countries outside of Africa.

The vaccine is formulated with an adjuvant called AS01. It is designed to prevent the parasite from infecting the liver, where it can mature, multiply, and infect red blood cells, which can lead to disease symptoms.

The vaccine, which requires four injections, is for children under the age of five. Its efficacy is modest, as demonstrated in phase 3 trials from 2009 to 2014, on 15,000 young children and infants in 7 African countries. Four doses prevented 39% cases of malaria over 4 years of follow-up and 29% cases of severe malaria, with significant reductions also seen in overall hospital admissions.

Why has it taken so long to develop a vaccine against malaria?

Although there have been decades of research, and over 20 candidates have entered clinical trials in the last few years, the best prevention of malaria remains the use of mosquito nets — which do nothing to eradicate malaria. Mosquirix itself is the result of more than 30 years of research and development.

“The difficulty in developing effective malaria vaccines stems largely from the complexity of the malaria-causing parasites’ life cycle, which includes mosquitoes, human liver, and human blood stages, and subsequent antigenic variations of the parasite. These parasites are also able to hide inside human cells to avoid being recognised by the immune system, creating further challenges,” a group of Australian and Chinese researchers wrote in an open-access journal last year.

They cited another challenge: “The most common mouse models of malaria employ the rodent-specific parasite species P. berghei, P. yoelii, and P. chabaudi… While they are still employed to model various manifestations of human disease, the immune response patterns observed in these models are not fully transferable to humans.

Navneet Arora, Lokhesh Anbalagan and Ashok Pannu from the Postgraduate Institute of Medical Education and Research (PGIMER) in Chandigarh point to the lack of funding and interest in developing a malaria vaccine. “Because malaria disproportionately affects LMIC (low and middle income countries) lacking the robust health infrastructure, the vaccine manufacturers have little incentive for malaria vaccines and continued targeting vaccines for industrialized world markets,” they wrote in a paper last year.

Other scientists have also mentioned that research for a malaria vaccine never received the same kind of attention as, say, HIV/AIDS.

When is RTS,S coming to India?

In January this year, GSK, PATH and Bharat Biotech signed a product transfer agreement to help ensure the long-term supply of the RTS,S vaccine. However, experts The Indian Express spoke to feel there is no immediate “rush” to introduce it in India. Although malaria is a concern in India, the burden has reduced through interventions such as antimalarial drugs, mosquito nets and insecticide: from 1,018 deaths in 2010 to 93 in 2020.

Besides, the vaccine’s efficacy is modest. Officials with the National Malaria Control Programme said that a vaccine has to give protection of over at least 65%.

What other vaccines are in development?

Several are being tested, and at least one has shown promise. Called R21/Matrix M, this candidate vaccine showed an efficacy of 77% in phase 2 trials in May this year. R21/Matrix M is a modified version of Mosquirix, and has been developed by researchers at the University of Oxford. Lead researcher Adrian Hill, director of Jenner Institute and professor of vaccinology at Oxford University, had said he believed this vaccine was the first to reach WHO’s goal of at least 75% efficacy.

Dr V S Chauhan, former director of Delhi-based International Centre for Genetic Engineering and Biology, and known for his efforts to develop a recombinant malaria vaccine, said R21/Matrix M held a lot of promise. “This vaccine is definitely a big hope, but it still has to undergo phase 3 trials,” he said.