Explained: How important are Lingayats and BS Yediyurappa in Karnataka politics?

Lingayats are the single largest community in Karnataka, at nearly 17 per cent of the population, mostly in the north Karnataka region, and are known to include firm supporters of the BJP and Yediyurappa. 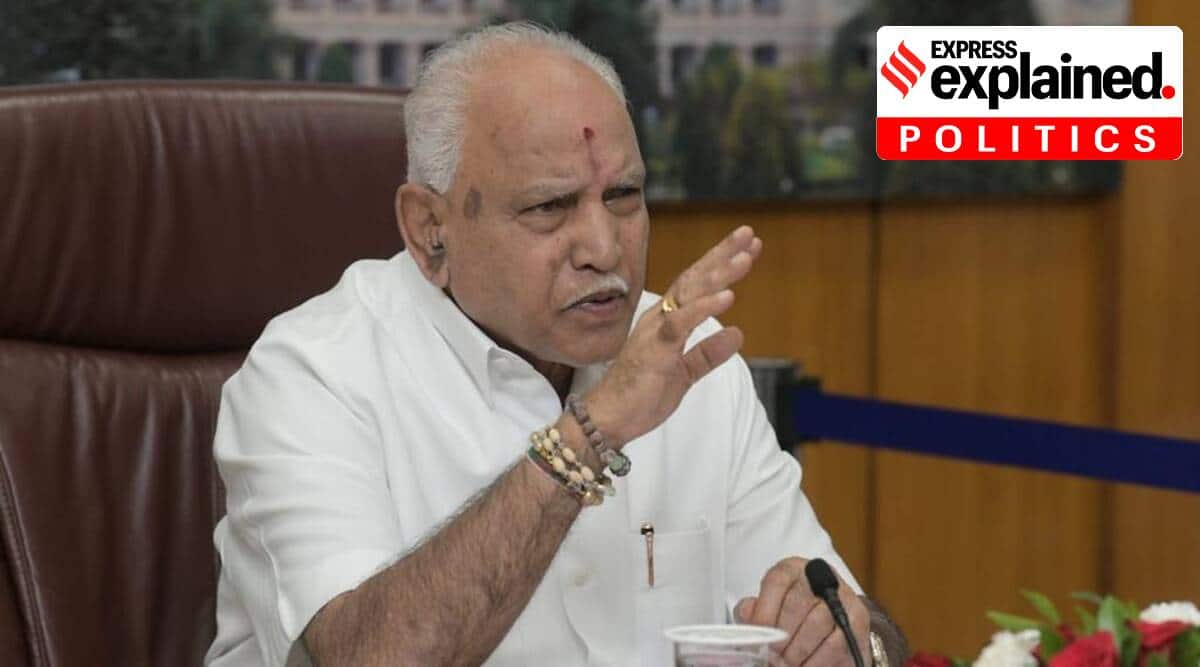 BS Yediyurappa resigned as Karnataka chief minister Monday afternoon. A Lingayat strongman, he received huge support not just from the Lingayat community but also from senior Congress leaders from the community and seers from various Lingayat mutts in the state.

Over the past two weeks, Yediyurappa visited central BJP leaders, including Prime Minister Narendra Modi, Home Minister Amit Shah and BJP president J P Nadda, amid talks of his resignation. Earlier this month, over 100 seers of various Lingayat mutts across Karnataka met Yediyurappa and offered their support, warning the BJP of consequences if he was replaced.

With Yediyurappa now having resigned, all eyes are on who will be his replacement. Will it be from the Lingayat community?

Don't miss from Explained |The time is now: Reading Mamata Banerjee’s message to the Opposition

Why does the Lingayat community matter to BJP?

Lingayats are the state’s single largest community, at nearly 17 per cent of the population, mostly in the north Karnataka region, and are known to include firm supporters of the BJP and Yediyurappa. The Lingayats, a Hindu Shaivite community, deify Basavanna who fought for equality in society.
The community can determine the outcome of polls in as many as 90-100 of the state’s 224 assembly constituencies.

The role of Lingayat mutts in politics

There are more than 500 mutts in the state. Of these, most are Lingayat mutts followed by Vokkaliga mutts. During the elections and after the elections, politicians cutting across party lines go mutt-hopping.

Lingayat mutts in the state are very powerful and are directly involved in politics since they have a large following and occupy a central space in their respective sub-sects.

The All India Veerashaiva Mahasabha, a Lingayat organisation with a grassroots presence in 22 districts, especially in the Lingayat heartland in North Karnataka, has rallied behind Yediyurappa.

A delegation led by another prominent Lingayat mutt in the state, Sri Siddalinga Swami of Siddaganga Mutt in Tumkur met Yediyurappa at his official residence, urging him to complete his term as chief minister.

The community has backed the BJP and its leader Yediyurappa since the turn of the century after the Congress lost its influence on the community in the 1990s on account of its shabby treatment of leaders such as former chief minister Veerendra Patil.

How did Lingayat move away from Congress?

Until the 1990s, the Lingayats were largely voting the Congress party to power in the state. At the time, the Congress had been in government in Karnataka with its largest majority ever, 179 out of the 224 seats in the Assembly, because of the Lingayat votes mobilised by Veerendra Patil.
The Congress also had a huge support from another dominant community, Vokkaliga.
However, Congress’s decision at the time made the Lingayat community look for an alternative party. After incidents of communal violence broke out due to the Rath Yatra conducted for the Ram Janmabhoomi issue, the Patil government was dismissed by the then Congress president Rajiv Gandhi just as Patil was recovering from a stroke.

Rajiv Gandhi announced the dismissal of the Chief Minister before boarding an aircraft at the Bengaluru HAL airport. This led Lingayat to move away from Congress, which eventually helped the BJP.

How did BJP get Lingayat support?

After seeing the Patil government dismissal by Gandhi, the Lingayat community voted against the Congress in the next elections held in 1994 in which the Congress was reduced to 36 seats from the 179 seats it won in the previous elections in 1989. Most votes went to BJP, which saw its vote share increase from around 4 per cent in the state to 17 per cent.

This also led to the rise of Yediyurappa as a Lingayat face in the state politics and BJP started to bank on Yeddyurappa’s stature in the Lingayat community.

How BJP was damaged by Lingayat and Yediyurappa in 2013

The BJP, which was banking on Yediyurappa to get Lingayat votes in 2013, removed him from the party over corruption allegations. Yediyurappa floated his own Karnataka Janata Party(KJP) after he had been forced to step down as chief minister.

This damaged the BJP as the Lingayat vote split in many constituencies between the BJP and Yediyurappa’s KJP, and the BJP won only 40 seats compared to the 110 it had won in 2008, and its vote share dipped from 33.86 per cent to 19.95, with the KJP taking 9.8 per cent.

The return of Yediyurappa to the BJP consolidated the Lingayat vote base of the party again in the 2014 general elections, where the BJP rode the Modi wave to win 17 of the 28 Lok Sabha seats in the state.

Also in Explained |What is the Essential Defence Services Bill and what is its objective?

Congress’ attempt to win the support of the Lingayat community

Ahead of the 2018 assembly polls and for the lack of Lingayats in strong positions in the party. In an attempt to win the support of the Lingayat community in Karnataka, the then Congress chief minister Siddaramaiah had issued orders for the installation of pictures of Basavanna, a 12th century social reformer from the community, in all government offices on the occasion of Basava Jayanti, the birth anniversary of the philosopher.