V-P Jagdeep Dhankhar sparks debate with remarks on Basic Structure of Constitution; what is it? 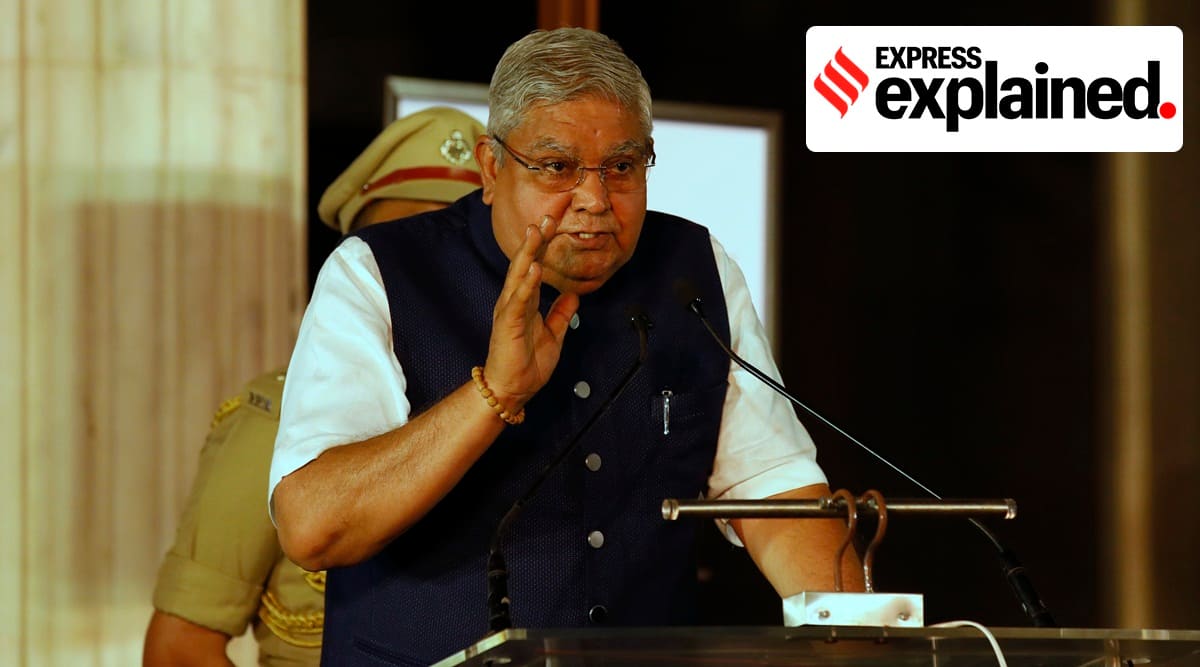 Vice President Jagdeep Dhankhar’s remarks reflect the criticism often made against the doctrine and its application: that it is not found in the text of the Constitution itself. (Express Photo by Partha Paul)
Listen to this article
V-P Jagdeep Dhankhar sparks debate with remarks on Basic Structure of Constitution; what is it?
x
00:00
1x 1.5x 1.8x

Vice President Jagdeep Dhankhar Wednesday sparked a debate on the separation of powers between the executive and the judiciary. He criticised the Supreme Court once again, for using the doctrine of basic structure to strike down the constitutional amendment that introduced the National Judicial Appointments Commission Act.

Earlier on December 7, in his maiden speech in the Rajya Sabha, Dhankhar had called the striking down of the NJAC Act a “severe compromise” of parliamentary sovereignty and disregard of the “mandate of the people”. What is the basic structure and how does it impact the powers of the legislature?

What is the basic structure doctrine?

The Doctrine of Basic Structure is a form of judicial review that is used to test the legality of any legislation by the courts.

The doctrine was evolved by the Supreme Court in the 1973 landmark ruling in Kesavananda Bharati v State of Kerala. In a 7-6 verdict, a 13-judge Constitution Bench ruled that the ‘basic structure’ of the Constitution is inviolable, and could not be amended by Parliament.

The test is widely regarded as a check on majoritarian impulses of the Parliament since it places substantive limits on the power to amend the Constitution.

How was the doctrine developed?

The Kesavananda ruling was a culmination of a series of tussles between the judiciary and the executive led by then Prime Minister Indira Gandhi. After a reversal of key legislation including land reforms; nationalization of banks; abolition of privy purse- the Parliament brought in a constitutional amendment to give itself the power to amend any part of the Constitution and passed a law that it cannot be reviewed by the courts.

Advertisement
Express Explained |Who was Kesvananda Bharati and how was he associated with the ‘Basic Structure’ doctrine?

The Court had to then examine the scope of the Parliament’s power to amend the Constitution and the legality of the land reforms. The 13-judge bench gave 11 separate judgments and the doctrine was culled out as the majority opinion in the case.

“Under the Weimar regime, the legislature reigned supreme and legal positivism was brought to an extreme. The re-action after World War II was characterised by decreases of legislative power matched by an increase of judicial power,” the ruling notes.

What are the basic features of the Indian Constitution?

In the Kesavananda ruling, the Supreme Court cited several aspects of the Constitution that could be identified as “basic features” of the document but added that it was not an exhaustive list.

In the 2015 ruling where the Supreme Court struck down the National Judicial Appointments Commission Act and the related Constitutional Amendment, “judicial independence” was identified as a basic feature of the Constitution.

The five-judge bench struck down the amendment passed with an overwhelming majority by the Parliament (with just one member abstaining) by applying the basic structure doctrine. This, Dhankhar referred to as the judiciary undermining the sovereignty of the Parliament.

Why is the doctrine criticised?

Vice President Dhankhar’s remarks reflect the criticism often made against the doctrine and its application: that it is not found in the text of the Constitution itself. By evolving a test, which is not a textual application of judicial review, an argument is made that the judiciary is encroaching on the Parliament’s powers.

Some critics of the doctrine, like senior advocate Raju Ramachandran have argued that the power of “unelected judges” to strike down amendments to the Constitution on the basis of this doctrine is “anti-democratic and counter-majoritarian.”

However, legal scholarship over the years has defended the legitimacy of the test. In his book-length defence of the basic structure doctrine, Dr Sudhir Krishnaswamy, the Vice Chancellor of National Law School of India University, Bangalore argues that the doctrine rests on a sound structural interpretation of the Constitution. Krishnaswamy in his book Democracy and Constitutionalism in India notes that even some skeptics of the doctrine have turned around over the years.

For example, Justice YV Chandrachud, former Chief Justice of India found himself in the minority in the Kesavananda Bharati ruling. However, in subsequent rulings where the Court applied the test, Justice Chandrachud applied the doctrine to limit Parliament’s powers.

UGC guidelines have got it wrong: To come to India, foreign universities need more than unlocking of regulatory keys