Explained: India’s missile capability, and where it stands in relation to its neighbours

🔴 Defence Minister Rajnath Singh has urged DRDO scientists to work towards developing hypersonic missile technology. What missiles has India developed so far, and where does it stand in relation to its neighbours? 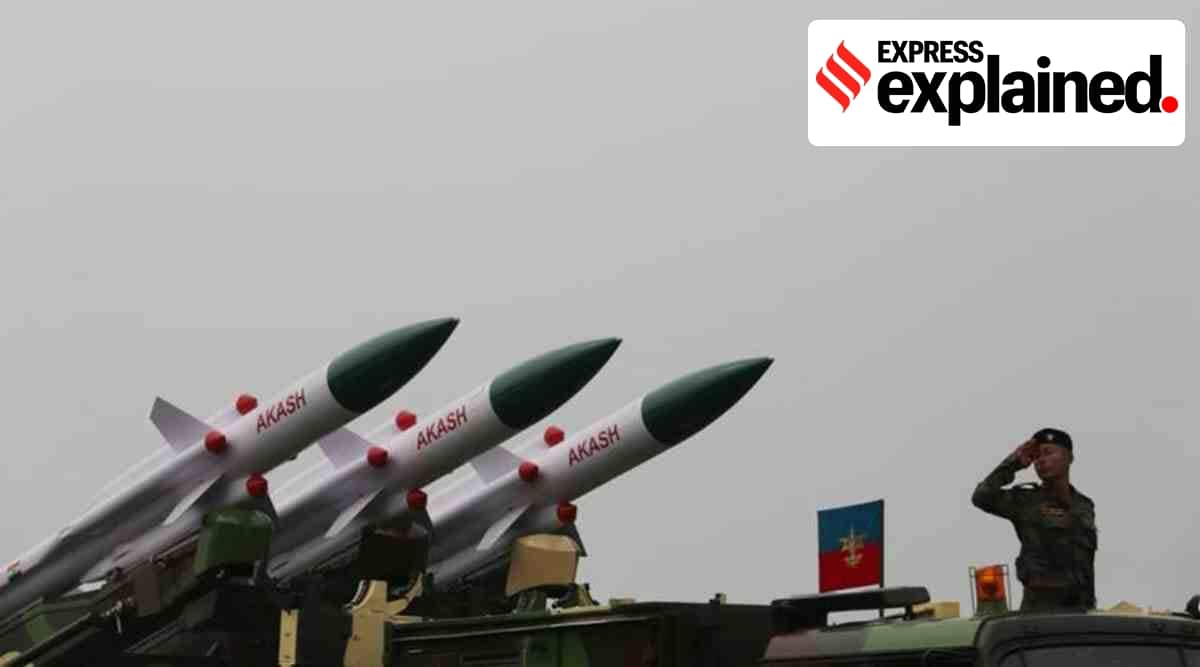 At a seminar organised by the Defence Research and Development Organisation (DRDO) last Tuesday, Defence Minister Rajnath Singh encouraged scientists to work towards developing hypersonic missile technology. China had demonstrated its hypersonic missile capability with successful tests of a hypersonic glide vehicle (HGV) which, according to reports, circled the globe but missed its target by just a few kilometres.

What is the history of missile technology in India?

Before Independence, several kingdoms in India were using rockets as part of their warfare technologies. Mysore ruler Hyder Ali started inducting iron-cased rockets in his army in the mid-18th century. By the time Hyder’s son Tipu Sultan died, a company of rocketeers was attached to each brigade of his army, which has been estimated at around 5,000 rocket-carrying troops.

At the time of Independence, India did not have any indigenous missile capabilities. The government created the Special Weapon Development Team in 1958. This was later expanded and called the Defence Research and Development Laboratory (DRDL), which moved from Delhi to Hyderabad by 1962.

“In 1972, Project Devil, for the development of a medium range Surface-to-Surface Missile was initiated. A large number of infrastructure and test facilities were established during this period.” DRDO’s official history of the lab states. “The development of components / systems for Project Devil formed the technology base for the future IGMDP Programme,” says DRDO. By 1982, DRDL was working on several missile technologies under the Integrated Guided Missiles Development Programme (IGMDP).

What kind of missiles does India have?

India is considered among the top few nations when it comes to designing and developing missiles indigenously, although it is way behind the US, China and Russia in terms of range.

DRDO chairman G Satheesh Reddy told The Indian Express that DRDO is “working on multiple varieties of missiles”. Among the surface-launched systems:

ANTI-TANK GUIDED MISSILE: Nag has already been inducted into the services. Reddy said Nag is the only “fire-and-forget ATGM meeting all weather requirements for its range (around 20 km)”. Recently Heli-Nag was tested, which will be operated from helicopters and will be inducted by 2022, said Reddy. There is also a Stand-off Anti-Tank (SANT) missile, with a range over 10 km. Tested from Indian Air Force (IAF) helicopters on December 11, it has a millimetre wave seeker, which enhances target detection in all weather conditions. Reddy said “man-portable ATGMs” are also available.

SURFACE-TO-AIR MISSILE: The short-range SAM system Akash has already been inducted in the Army and the Air Force. For Akash 1, which has a seeker, the Army has already got the Acceptance of Necessity from the government, Reddy said. For Akash (New Generation), the first tests were conducted in July this year; Reddy said a couple more trials are to be done.

Medium-Range SAM: Production of MRSAM systems for the Navy is complete, and it is placing its order, Reddy said. The Jaisalmer-based 2204 Squadron of the Air Force became the first unit to get the MRSAM systems in September this year. Technology for MRSAM for the Army “is also in a good shape and will be flight-tested soon”.

Short-Range SAM: For the Navy, the first flight tests have been successfully conducted.

Must Read |Have told US, Russia and France that will make defence systems in India: Rajnath Singh

AIR-TO-AIR: Astra, India’s Beyond Visual Range Air-to-Air Missile (BVRAAM), has been completely tested and is under induction. It has a range of around 100 km, and DRDO is trying to now induct it with more IAF platforms, including the domestically developed light combat aircraft Tejas. A long-range Astra is also being developed, for which initial tests have been conducted. The missile uses solid fuel ramjet technology, which enhances speed, and will have an indigenously-built seeker.

AIR-TO-GROUND: Rudram, a New Generation Anti-Radiation Missile (NGRAM), has cleared initial tests and “some more tests will be conducted soon.” With a maximum range of around 200 km, the missile mainly targets communication, radar and surveillance systems of the adversary, and was tested from the Sukhoi-30MKI fighter jet last year. Reddy mentioned that BrahMos, which India developed jointly with Russia, is already operational. It has a 300 km to 500 km range, and is a short-range, ramjet-powered, single warhead, supersonic anti-ship or land attack cruise missile.

Reddy said a supersonic missile-assisted torpedo system was successfully launched from Wheeler Island last Monday. It “carried a torpedo and delivered it at a longer range” and will enhance Navy anti-submarine capability with a range of around 400 km, Reddy said.

Which of India’s missile systems are most important?

The two most important are Agni and Prithvi, both being used by the Strategic Forces Command.

Agni (range around 5,000 ) , is India’s only contender for an inter-continental ballistic missile (ICBM), which is available with only a few countries. Prithvi, although a short-range surface-to-surface missile with a 350 km range, has strategic uses. India also tested a anti-satellite system in April 2019. A modified anti-ballistic missile named Prithvi Defence Vehicle Mk 2 was used to hit a low-orbit satellite. It put India only behind the US, Russia and China in this capability.

Also Read |Explained: What is the vertical launch surface to air missile that India has successfully test-fired?

What about hypersonic technology?

India has been working on this for a few years, and is just behind the US, Russia and China. DRDO successfully tested a Hypersonic Technology Demonstrated Vehicle (HSTDV) in September 2020, and demonstrated its hypersonic air-breathing scramjet technology.

According to sources, India has developed its own cryogenic engine and demonstrated it in a 23-second flight. India will try to make a hypersonic cruise missile, using HSTDV.

Sources said only Russia has proven its hypersonic missile capability so far, while China has demonstrated its HGV capacity. India is expected to be able to have a hypersonic weapons system within four years, with medium- to long-range capabilities.

Lt Gen V K (retired) Chaturvedi, who had headed the Army’s artillery’s modernisation programme, said missile technology is “one field in which India has made very, very positive and substantial progress”.

Under the IGMP then headed by A P J Abdul Kalam, later India’s President, first came Prithvi, then Agni. BrahMos, at 2.5-3 times the speed of sound, was among the fastest in the world when developed, Chaturvedi said. “After the nuclear blast in 1998, cryogenic etc were not given to us. Kalam and others, they made it a point that they developed it within the country.”

Chaturvedi said the US is leading in missile technology, and China is building up”. India is also “at a very advanced stage” among the top three or four nations .

With India’s missiles, Chaturvedi said “today our basic opponent, area of interest is northern border [China]. In the western border [Pakistan] we cover the whole area”.

With Agni V ready, he said, India is working on Agni VI and Agni VII, which should have a much longer range. He mentioned that Prithvi, which DRDO developed in consultation with the armed forces, “was originally with the Army, and went to the Strategic Forces” but is expected to be back to the Army later. Pinaka rocket systems have also been developed in close coordination with the user agencies, he said.

Where do China and Pakistan stand compared to India?

While China is ahead of India, Chaturvedi believes a “lot of things about China are psychological”.

According to a Pentagon report in 2020, China may have either achieved parity, or even exceeded the US in land-based conventional ballistic and cruise missile capabilities.

Chaturvedi said China’s missile development is “definitely a concern for us, but we will definitely evolve”. He said if China strikes a strategic target of India, “we will hit back with equal potential, and hit them at the place where it matters the most.”

Chaturvedi was more dismissive about Pakistan. China has given Pakistan the technology, “but getting a technology and really using it, and thereafter evolving and adopting a policy is totally different”.

He called hypersonic missiles “weapons of deterrence” but will not be used. He believes they “will continue to deter, but unlikely that China will ever use this. But if it does, India will not sit idle.”

On nuclear capability, Chaturvedi said although India does not call BrahMos nuclear, it can be used. India’s only nuclear missiles are Prithvi and Agni, but beyond those, tactical nuclear weapons can be fired from some IAF fighter jets or from Army guns, which have a low range, around 50 km.