Of the 63 million households surveyed in 4,041 cities and towns, the panel’s BPL definition entitles 22 mn (about 110 mn people) to benefits of welfare schemes.

Almost 35% of urban households live below the poverty line (BPL), according to data from the first Social Economic and Caste Census (SECC). An analysis of the numbers and methodology, however, shows that up to 56% of households could qualify to be included in the broader category of ‘urban poor’.

Details of urban SECC data have not been released yet. The Indian Express reported several findings on July 17. The data has been tabulated on the basis of criteria laid down by the S R Hashim committee appointed by the erstwhile Planning Commission of India.

Absence of data on urban India has meant that target groups for several urban poverty alleviation programmes have often been chosen arbitrarily or on considerations of political patronage. As the focus moves to targeted subsidies and DBT, reliable urban SECC figures are becoming increasingly critical. 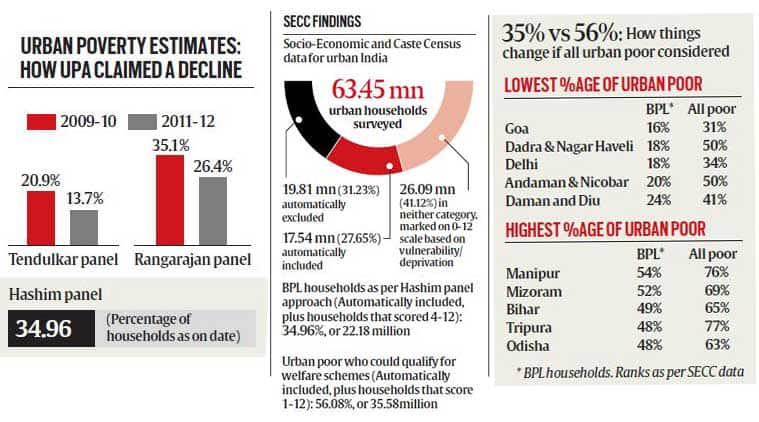 To estimate the urban BPL population, the panel followed a three-step process.

First, it identified criteria that would automatically exclude certain households: pucca house with four or more rooms; either a car, AC or computer with Internet connection; or any three among a landline phone, washing machine, fridge and two-wheeler.

Next was a process of automatic inclusion — those facing certain residential, social or occupational vulnerabilities, such as being homeless or living in informal housing; households with no able-bodied persons or adults; or groups like beggars, ragpickers or sanitation workers.

As per SECC, these ‘automatic inclusions’ in the BPL category make up 27.65% of urban households.

Finally came households who could be neither automatically included nor automatically excluded, and this section was graded on a scale of 0-12, with 12 being the most vulnerable, closest to automatic inclusion. Zero excluded the household from the poverty list.

To arrive at its BPL figure, the panel added to the automatically-included (27.65%) those households that scored between 4 and 12 on the deprivation index. They were 7.31% of households, taking the BPL figure to 34.96%.

To identify beneficiaries of welfare schemes, the panel said, governments could choose a cut-off score on the deprivation index and, depending on the availability of resources, eventually expand coverage to all urban poor in the 1-12 bracket.

Of the 63 million households surveyed in 4,041 cities and towns, the panel’s BPL definition entitles 22 mn (about 110 mn people) to benefits of welfare schemes. Including all urban poor would take the number to 35.53 mn households, or 177 mn individuals.

From BPL to all ‘Poor’

As per the SECC, Northeastern states have the highest proportion of BPL households, with Manipur, Mizoram, Tripura, Nagaland, Meghalaya and Assam in the 10 Poorest list and Arunachal Pradesh at No. 13. Rajasthan, Odisha, Bihar and Chhattisgarh are the other four in the Top 10 poor list.

The other list, of states with the lowest proportion of BPL households, is topped by Goa, and includes other small states/UTs like Dadra & Nagar Haveli, Delhi, Andaman & Nicobar Islands and Daman & Diu. Maharashtra, the only large state on this list, is at No. 5.

Both lists, and rankings, however, change sharply when the BPL line is discarded and all urban poor are counted. While the proportion of poor continues to be relatively low in Goa and Delhi, more than 50% urban households in Maharashtra qualify. In Manipur, Nagaland and Tripura, the proportion goes up to more than 75% of the total.

Economist Amitabh Kundu said the government “should not feel embarrassed to recognise that 56% need to be targeted”. It could start with the bottom 35% and move gradually up, he said. Harsh Mander, a member of the Hashim panel and of National Advisory Council (NAC) said that 56% should be considered as the urban poverty benchmark, rather than the 35% BPL figure that could underestimate the extent of poverty.