Explained: How Webb Telescope will seek to unlock universe’s secrets

🔴 JWST is an engineering marvel comparable to the earth-based Event Horizon Telescope that produced the photograph of the black hole, or the LIGO that detected the gravitational waves. 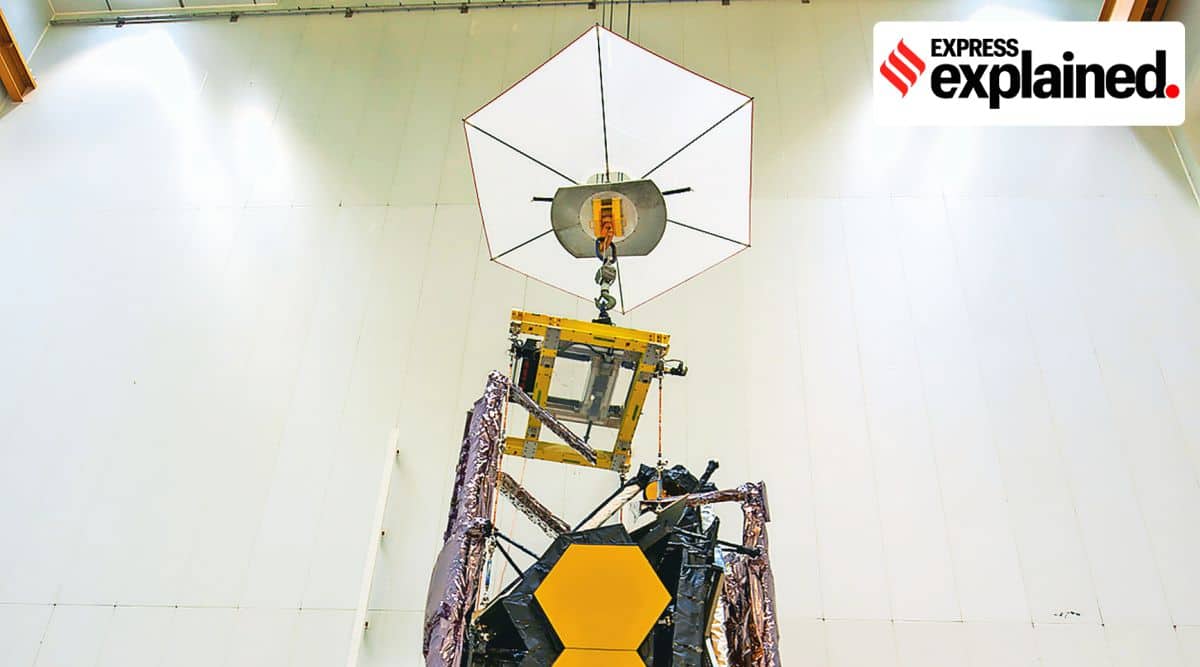 The excitement in the scientific community is similar to what had accompanied news of detection of the gravitation waves in 2016, or the release of the first ever ‘photograph’ of a black hole in 2019. This time, no major scientific discovery is being announced. Rather, it is the potential for many such discoveries that is creating the buzz.

Around 6 pm India time on Saturday, NASA’s James Webb Space Telescope (JWST), the largest and most powerful space telescope ever built, will be launched from French Guiana, on the northeast coast of South America, on the European Ariane 5 rocket. It is the same space facility and the same rocket that the Indian Space Research Organisation uses to launch its heavier satellites.

JWST is an engineering marvel comparable to the earth-based Event Horizon Telescope that produced the photograph of the black hole, or the LIGO that detected the gravitational waves. It is widely expected to unveil many secrets of the universe, particularly those related to the formation of stars and galaxies in the early period — the first few hundred million years — after the Big Bang.

Powerful space telescopes, like JWST or the Hubble Telescope, are often called time-machines because of their ability to view very faraway objects. The light coming from those objects, stars or galaxies, which is captured by these telescopes, began its journey millions of years earlier. Essentially, what these telescopes see are images of these stars or galaxies as they were millions of years ago. The more distant the planet or star, the farther back in time are the telescopes able to see.

Images and data sent by Hubble, which has been in operation since 1990, orbiting the Earth at 570 km, form the basis for much of our understanding of the early universe and the formation and destruction of planets, stars and galaxies. It has seen deeper into the universe than any other instrument and taken the most iconic photographs of stars and galaxies.

We’ve started to roll out the Webb telescope and its launch vehicle – an @Ariane5 rocket – to the launch pad. The process should take about 2 hours. Launch is set for Dec. 25 at 7:20 am ET (12:20 UTC): https://t.co/CmKf8i276l #UnfoldtheUniverse pic.twitter.com/eXulUtIjPQ

JWST is much more powerful and has the ability to look in the infrared spectrum, which will allow it to peer through much deeper into the universe, and see through obstructions such as gas clouds. As electromagnetic waves travel for long distances, they lose energy, resulting in an increase in their wavelength. An ultraviolet wave, for example, can slowly move into the visible light spectrum and the infrared spectrum, and further weaken to microwaves or radio waves, as it loses energy. Hubble was designed to look mainly into the ultraviolet and visible regions of the electromagnetic spectrum. JWST is primarily an infrared telescope, the first of its kind.

JWST will also be positioned much deeper into the space, about a million miles from Earth, at a spot known as L2. It is one of the five points, known as Lagrange’s points, in any revolving two-body system like Earth and Sun, where the gravitational forces of the two large bodies cancel each other out. Objects placed at these positions are relatively stable and require minimal external energy to keep themselves there. L2 is a position directly behind Earth in the line joining the Sun and the Earth. It would be shielded from the Sun by the Earth as it goes around the Sun, in sync with the Earth.

JWST has one large mirror, with a diameter of 21 feet (the height of a typical two-storey building), that will capture the infra-red light coming in from the deep universe while facing away from the Sun. It will be shielded by a five-layer, tennis court-sized, kite-shaped sunscreen that is designed to block the heat from Sun and ensure the extremely cool temperatures that the instruments are built to operate at. Temperatures on the sun-facing side can get as high as 110°C, while the other side would be maintained at –200° to –230°C. The extremely cold temperatures are needed to detect the extremely faint heat signals from the distant galaxies. The mirror as well as the sunscreen are so large they could not have fit into any rocket. They have been built as foldable items and would be unravelled in space.

At its heart, the instruments on board JWST have very simple functions — an infrared camera will take images of astronomical objects, while spectrometers would break the incoming infrared light into different colours for analysis. But with these seemingly simple operations, scientists are hoping to unlock information that would significantly improve mankind’s understanding of the universe and throw some light on at least a few of the never-ending mysteries of nature.