Explained: How to read Tipu Sultan’s place in history

The Karnataka government wants to "remove" Tipu Sultan from textbooks. Why has the government announced such a step? How then should the historical figure of Tipu Sultan be assessed today? 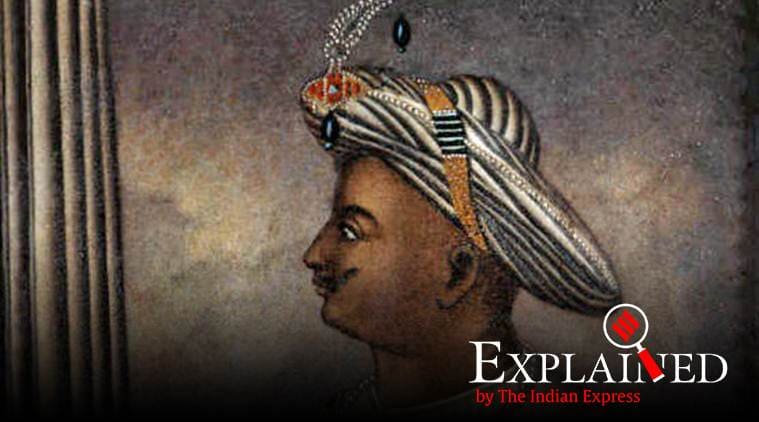 The BJP has long underlined Tipu’s cruel treatment of Hindus, including torture, forced conversions, and the razing of temples in the course of his conquests, as the central feature of his personality. (File)

Karnataka Chief Minister B S Yediyurappa has announced that his government “is trying to remove Tipu Sultan’s history lessons from textbooks in the state”. “Such topics”, he said in Bengaluru on Wednesday, “must not find a place in textbooks. 101% we are not going to allow such things to happen”.

Thereafter, the official Twitter handle of the BJP in Karnataka posted: “By ending public celebrations of Tipu Jayanti, our CM has restored dignity to Kannadigas. As the next step, textbooks must be rewritten to portray the real Tipu Sultan to our Children. They should be made aware of the Tyrant’s cruelty against Hindus & his anti Kannada rule.”

The “removal” of Tipu from textbooks will fundamentally alter the history of early modern India, and make invisible one of the key individuals in the society and politics of South India in the second half of the 18th century, when the East India Company was rapidly expanding Britain’s colonial footprint over the country.

Why has the government announced such a step?

The BJP has long underlined Tipu’s cruel treatment of Hindus, including torture, forced conversions, and the razing of temples in the course of his conquests, as the central feature of his personality. This perspective is not new, nor is it a view that only the BJP subscribes to. In the hills and jungles of Kodagu on the Kerala-Karnataka border, as well as in Kerala, Tipu is not seen as a hero.

The reason lies in history: both Tipu and his father Haider Ali had strong territorial ambitions, and invaded and annexed territories outside Mysore. Haider annexed Malabar and Kozhikode, and conquered Kodagu, Thrissur and Kochi.

Tipu raided Kodagu, Mangaluru, and Kochi. In all these places, he is seen as a bloodthirsty tyrant who burnt down entire towns and villages, razed hundreds of temples and churches, and forcibly converted Hindus. The historical record has Tipu boasting about having forced “infidels” to convert to Islam, and of having destroyed their places of worship.

In modern times, the BJP has sought to harness this strand of Tipu’s personality to fulfill its political objectives. For the BJP and the Sangh Parivar, the allegedly anti-Hindu personality of Tipu presents an opportunity to push political conversation towards religious identities, and to force a polarisation.

This was the project the BJP in Karnataka took up energetically around 2016-17, as the Assembly elections of 2018 approached, and it aimed to build a broad ‘Hindu’ platform against then Chief Minister Siddaramaiah’s coalition of OBCs and minorities.

The BJP’s opposition to Tipu was manifested in its strong opposition to the Tipu Jayanti celebrations that Siddaramaiah’s government began in 2015, which the BJP decried as “a deliberate attempt to stoke communal tensions” and “a blatant attempt at vote bank politics”. Violence broke out in Kodagu district in connection with the celebrations, in which two people, including a VHP activist, were killed.

Senior BJP leader Kailash Vijayvargiya declared that “Tipu Sultan’s place in history should be reconsidered”, and three months after becoming Chief Minister again, Yediyurappa has announced that his government is seeking to rewrite Indian history in a “nationalist” mould.

Also read | Tipu Sultan, the Tiger of Mysore, has stirred a row, again

What is the counternarrative to this understanding of Tipu Sultan?

The counternarrative is, in fact, what has been the mainstream narrative — for long a part of school textbooks and the overarching framework for the understanding of India’s history.

In this narrative, Tipu Sultan is the fearless “Tiger of Mysore”, a powerful bulwark against colonialism, and a great son of Karnataka.

Tipu was the son of Haider Ali, a professional soldier who climbed the ranks in the army of the Wodeyar king of Mysore, and ultimately took power in 1761. Tipu was born in 1750 and, as a 17-year-old, fought in the first Anglo-Mysore War (1767-69) and subsequently, against the Marathas and in the Second Anglo-Mysore War (1780-84). Haider died while this war was on, and Tipu succeeded him in 1782.

In the wider national narrative, Tipu has been seen as a man of imagination and courage, a brilliant military strategist who, in a short reign of 17 years, mounted the most serious challenge the East India Company faced in India.

He fought the forces of the Company four times during 1767-99, and gave the Governors-General Cornwallis and Wellesley bloody noses before he was killed heroically defending his capital Srirangapatnam in the Fourth Anglo-Mysore War.

With Tipu gone, Wellesley imposed the Subsidiary Alliance on the reinstated Wodeyar king, and Mysore became a client state of the East India Company.

Tipu reorganised his army along European lines, using new technology, including what is considered the first war rocket. He devised a land revenue system based on detailed surveys and classification, in which the tax was imposed directly on the peasant, and collected through salaried agents in cash, widening the state’s resource base.

He built a navy to support trade, and commissioned a “state commercial corporation” to set up factories. As Mysore traded in sandalwood, silk, spices, rice and sulphur, some 30 trading outposts were established across Tipu’s dominions and overseas.

How is the mainstream narrative to be reconciled with the historical accounts of his brutality?

The existing narrative does not seek to whitewash or deny the accounts of Tipu’s brutality, but it does seek to understand these specific incidents within the larger historical context of late medieval and early modern India.

Tipu is only one of several historical figures about whom sharply differing perspectives exist. Opposing historical narratives have frequently been used as ammunition in modern political battles. This is because in much of India, history is frequently seen through ethnic, communal, regional, or religious lenses.

As such, the case of Tipu is not unique, neither is the disagreement over him new. The controversy has been brought alive every few years by political provocation.

The Congress and socialists have seen Tipu as a “nationalist” because he fought the British. The roads, modern standing army, and systems of administration and irrigation that he built, have been stressed to decommunalise his legacy. Championing Tipu as a “statesman” is in line with the Congress’s religion-neutral nationalist tradition.

On the other hand, his destruction of temples and forced conversions of Hindus and Christians feeds into the Hindutva narrative of the tyrranical and fanatical Muslim ruler.

How then should the historical figure of Tipu Sultan be assessed today?

It is important to be aware that much of the criticism of Tipu is rooted in the accounts of those whom he vanquished — and of colonial historians who had powerful reasons to demonise him.

Tipu defeated the East India Company in wars, allied with the French to frustrate the attempts of the British to control the politics of the Deccan and Carnatic, and sought to challenge the vital trading interests of the Company.

Tipu’s keenness to subjugate Kodagu was linked directly to his desire to control the port of Mangaluru, on whose path Kodagu fell. Tipu battled nearly all powers in the region, irrespective of the faith of his opponents. His army had both Hindus and Muslims, and among the populations that he slaughtered in Kerala, there were sizeable numbers of Muslims.

It is likely that Tipu’s Islamic zeal had something to do with finding ideological ballast for his relentless warring.

To argue, like Siddaramaiah, that Tipu was a “nationalist patriot” and “secular”, is misleading. Back in the 18th century, there was no “nationalism” or “secularism”. These are modern concepts that should not be read back in time.

But it is also misleading to argue that if Tipu fought the British, it was “only to save his kingdom” — because so did every other pre-modern ruler, in India and elsewhere.

Just as there is evidence that Tipu persecuted Hindus and Christians, there is also evidence that he patronised Hindu temples and priests, and gave them grants and gifts. He donated to temples at Nanjangud, Kanchi and Kalale, and patronised the Sringeri mutt.

When linguistic states were formed in the 1950s, many regions that read their historical past differently were merged under a common linguistic identity. Kodagu, now part of Karnataka, has always seen Tipu as an invader, and the old Mysore state’s narrative of him as a moderniser would not be acceptable to Kodagu only because it is now the official state narrative.

It serves no purpose to view Tipu’s multilayered personality through the prism of morality or religion. It is not necessary that he be judged only in terms of either a hero or a tyrant.