The power for this disqualification is vested in the Speaker, who is usually a nominee of the ruling party. 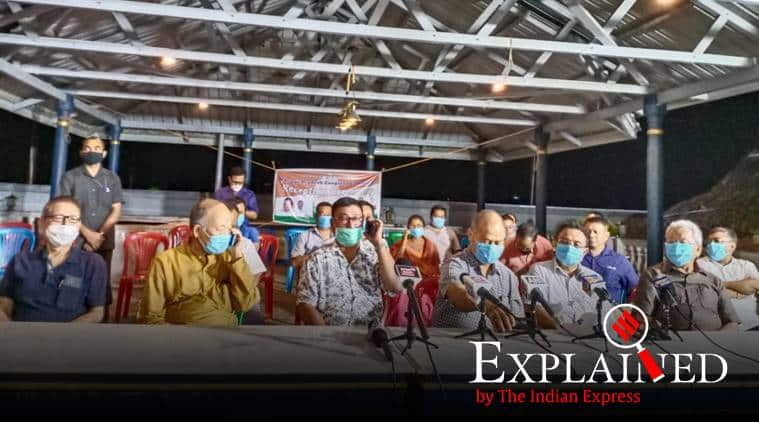 The MLAs at a press conference in Manipur. (Express photo)

Manipur Speaker Y Khemchand’s decision to disqualify three Congress MLAs and the state’s lone TMC MLA ahead of the Rajya Sabha election last week has raised questions once again on the Speaker’s powers to disqualify under the Constitution. With the disqualifications, BJP candidate Leisemba Sanajaoba was elected to the Rajya Sabha with 28 votes. The Congress secured four votes less.

In 2017, the BJP formed the government in Manipur after seven legislators who won on a Congress ticket switched sides. The Congress party asked the Speaker to disqualify these seven, but the petitions were kept pending.

According to paragraph 2(1)(a) of the Tenth Schedule of the Constitution, an elected member of the house shall be disqualified from being a member if they win the election as a candidate of one party and then join another. The power for this disqualification is vested in the Speaker, who is usually a nominee of the ruling party. The anti-defection law, referred to as the Tenth Schedule, was added to the Constitution through the Fifty-Second (Amendment) Act, 1985.

Since no action was taken by the Speaker on the disqualification petitions, a writ petition was filed before the High Court of Manipur in Imphal seeking directions to decide on the petition within a reasonable time. However, the court did not pass an order saying that the larger issue of whether a High Court can direct a Speaker to decide a disqualification petition within a certain timeframe is pending before a Constitution Bench of the Supreme Court. The parties were left with the option to move the apex court or wait for the outcome of the cases pending before it.

In 2018, however, the High Court, refusing the preliminary objections of the Speaker, decided to hear the case on merits. It reasoned that since the remedy under Tenth Schedule is an alternative to moving courts. It said that if the remedy is found to be ineffective due to deliberate inaction or indecision on the part of the Speaker, the court will have jurisdiction. However, the High Court again did not pass orders since the larger issue is pending before the Supreme Court.

Explained | The highs and lows of the BJP govt in Manipur

In the 2016 SA Sampath Kumar vs Kale Yadaiah and Others case relating to the disqualification of a Telangana MLA, a two-judge bench of the Supreme Court had asked a larger bench to clarify the legal position on the Speaker’s powers to disqualify and the extent to which such decisions of the Speaker can be reviewed by the courts. This larger bench, however, is yet to be formed.

This January, expressing its displeasure with the Speaker’s lack of urgency in deciding the disqualification petitions, a three-judge bench comprising Justices Rohinton F Nariman, Aniruddha Bose and V Ramasubramanian ruled that Speakers of assemblies and the Parliament must decide disqualification pleas within a period of three months except in extraordinary circumstances. This settled the law for situations where the timing of the disqualification is meddled to manipulate floor tests.

The court also recommended that the Parliament consider taking a relook at the powers of the Speakers citing instances of partisanship. The court suggested independent tribunals to decide on disqualification. In the context of Manipur, this ruling meant that Speaker Khemchand had to rule on the disqualification within three months since.

Incidentally, the 2016 reference was made by a bench of Justices R K Agarwal and Nariman.

But even after three months after the Supreme Court order, the Speaker did not take a call on the disqualifications. On March 18, in an extraordinary move, the Supreme Court removed Manipur Minister Thounaojam Shyamkumar Singh, against whom disqualification petition was also pending before the Speaker since 2017, from the state cabinet and restrained him “from entering the Legislative Assembly till further orders”.

On June 8, the Manipur High Court also passed similar orders in the case of the seven Congress MLAs, relying on the SC verdict. The Speaker, on the eve of the Rajya Sabha elections, finally ruled on the petitions.

On June 17, three-BJP MLAs resigned and four ministers in N Biren Singh’s government, all MLAs of NPP, switched camps to lend support to the Congress. Of the seven MLAs, who had in 2017 jumped to BJP, four MLAs once again pledged their votes to the Congress. One of those four MLAs, Brojen Singh, moved the High Court a day before the election and secured permission to vote. With the speaker disqualifying the other three and a TMC MLA, the Congress secured 24 votes, four short of the BJP.