Explained: Going back 1300 years, the story of Mahabalipuram’s China connection

The name Mamallapuram derives from Mamallan, or “great warrior”, a title by which the Pallava King Narasimhavarman I (630-668 AD) was known. The Descent of the Ganga/Arjuna’s Penance in Mahabalipuram. (Bernard Gagnon via Wikipedia)

Mahabalipuram, or Mamallapuram, 56 km south of Chennai on the Tamil Nadu coast, where Prime Minister Narendra Modi will meet China’s President Xi Jinping on October 11 & 12 in an informal Wuhan-style summit, had ancient links with Buddhism and China through the maritime outreach of the Pallava dynasty.

The setting speaks to several contemporary themes in India-China relations — and of contacts, both continuous and changing, across space and time. While the powerful symbolism of Mahabalipuram will likely not succeed in influencing China’s hard-nosed assertion over J&K and other issues with India, the remarkable historical significance of the venue bears underlining.

When the Pallavas ruled

The name Mamallapuram derives from Mamallan, or “great warrior”, a title by which the Pallava King Narasimhavarman I (630-668 AD) was known. It was during his reign that Hiuen Tsang, the Chinese Buddhist monk-traveller, visited the Pallava capital at Kanchipuram.

Most interestingly, as historian Tansen Sen recorded in his 2003 work Buddhism, Diplomacy and Trade: The Realignment of Sino-Indian Relations, 600-1400, Narasimhavarman II sent a mission to the Tang court in 720 with a request that would seem unusual in the context of India-China relations today. The name Mamallapuram derives from Mamallan, or “great warrior”, a title by which the Pallava King Narasimhavarman I (630-668 AD) was known. (Express Photo)

The emissaries of the Pallava king sought the permission of Emperor Xuangzong to fight back Arab and Tibetan intrusions in South Asia. And, “Pleased with the Indian king’s offer to form a coalition against the Arabs and Tibetans, the Chinese emperor bestowed the title of ‘huaide jun’ (the Army that Cherishes Virtue) to Narayansimha II’s troops”, Sen wrote. The offer of help by the Pallava ruler, Sen noted, may have had more to do with furthering trade and for the prestige of association with the Chinese emperor, rather than any real prospect of helping him to fight off enemies in the faraway north.

The Descent of the Ganga/Arjuna’s Penance, a rock carving commissioned by Narasimhavarman I, with its depiction of the Bhagirathi flowing from the Himalayas, may serve as a reminder of the geography of India-China relations, and their shared resources. Tamil-Chinese links continued after the Pallavas, flourishing under the Cholas as the Coromandel coast became the entrepot between China and the Middle East. The links extended to a wider area beyond Mahabalipuram, through a layered history that has left a rich tapestry of society, culture, art and architecture, which is diverse and complex, and reaches up to modern times.

If he looks south from the platform of the 7th century Shore Temple, President Xi might be able to spot a key symbol of 20th century — the white domes of the Madras Atomic Power Station at Kalpakkam, 15 km down the coastline. MAPS, built in the 1980s, is India’s first indigenously constructed power station.

India’s secularism and diversity would not be on the agenda of the two leaders — however, their meeting ground is in a part of the country where this ethos is a lived reality. Hindu- and Muslim-majority villages alternate along that coast, each community having lived next to the other for centuries. By the time Islam arrived on south India’s east coast in the 9th century, Muslims had already started trading with China by maritime routes, Sen wrote. The trading missions that the Cholas sent to the Song court included Muslims. A trader named Abu Qasim was second-in-command of a mission sent in 1015; the next mission, in 1033, included one Abu Adil. “It is possible that both Abu Qasim and Abu Adil were members of the Tamil-speaking Muslim community on the Coromandel coastknown as Ilappai,” Sen wrote. Today, the ancient port of Marakanam is a fishing village, known for its Muslim boatmakers.

In later centuries, the Coromandel coast retained its importance for trade between China and the west. In the 17th and 18th centuries, it was a staging post for the Dutch, French and British for control of the seas between South Asia and Southeast Asia, as the Europeans fought to protect their trade routes with China and other countries in the region.

The ancient port city of Pondicherry, 80 km south of Mahabalipuram, was a French colony famous for its Chinese exports known as “Coromandel goods”, including crepe de chine. Today the Union Territory, with its French legacy, Tamil residents, Bengali and international devotees of Sri Aurobindo, is among the most diverse and cosmopolitan of cities in South India.

After establishing their writ on the Coromandel Coast, the British expanded eastward and established control over the Straits of Malacca, essentially to protect their trade routes to China and the rest of the region. 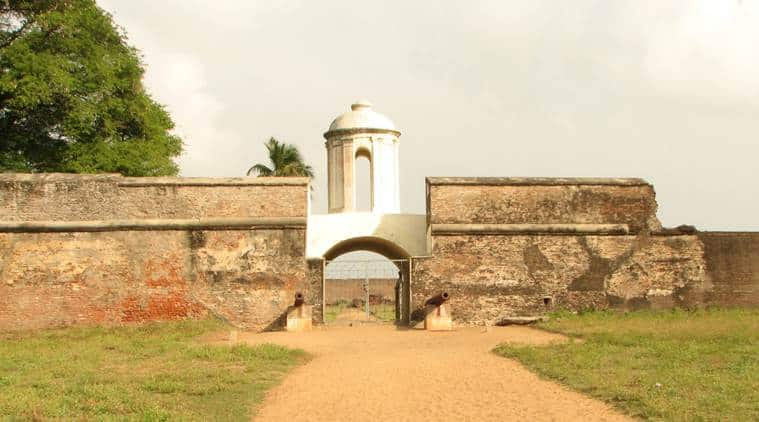 Among the colonial outposts on this coast is Sathurangapattinam, or Sadras, right next to Kalpakkam, where the Dutch East India Company built a fort, their second one on the east coast after establishing a capital at Pulicat, north of Chennai.

Sadras became a huge centre for the Dutch-controlled manufacture of cotton and muslin. The Dutch presence in the region grew rapidly after they established themselves in Java in 1603. They traded within Asia, buying textiles, metal, and porcelain, importing and exporting between India, China and Japan, to keep the spice trade going.

Don’t miss from Explained: Can the government intercept WhatsApp?