Large sections of Britain's rail network have been repeatedly brought to a standstill over recent months. Meanwhile, Thousands of British nurses will go on strike on Dec. 15 and Dec. 20 after the government refused to meet their pay demands, the Royal College of Nursing union said. 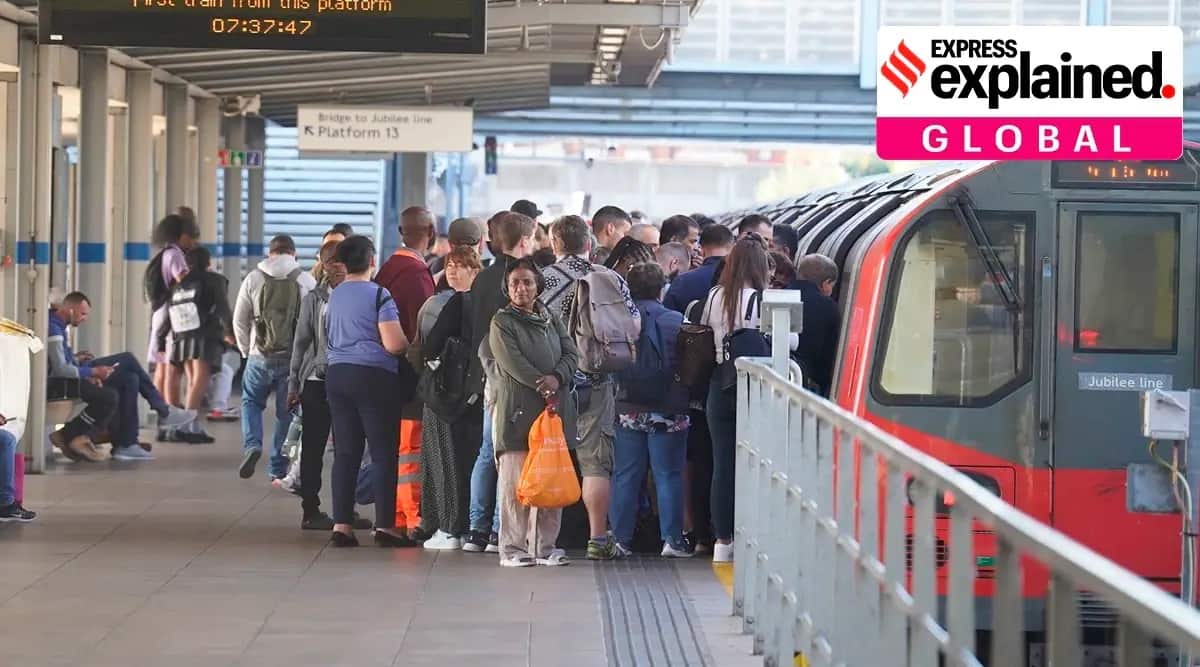 Tens of thousands of railway workers will stage further strikes before and after Christmas in a dispute over pay and conditions. Commuters are bracing for severe travel disruption over the festive period. (AP)

Britain faces widespread industrial unrest in the run up to the Christmas holiday period and into January as workers struggling with double-digit inflation resort to strike action to demand better pay and working conditions.

Below are some of the industries in which labour unions have undertaken or threatened strikes:

Large sections of Britain’s rail network have been repeatedly brought to a standstill over recent months.

Tens of thousands of railway workers will stage further strikes before and after Christmas in a dispute over pay and conditions. Commuters are bracing for severe travel disruption over the festive period.

Members of the Associated Society of Locomotive Engineers and Firemen (ASLEF) will also carry out industrial action at 11 train operating companies on Nov. 26 after a pay deal could not be reached.

Train drivers working for London Overground have suspended strike action planned for Nov. 26 following a pay offer made to ASLEF members which will now be voted on.

Another transport trade union, the Transport Salaried Staffs Association (TSSA), said talks were ongoing with Network Rail and train operators to reach a possible settlement to avert further industrial action by its members.
RMT members working as cleaners throughout the transport network, have also voted to strike.

Britain’s state-run National Health Service (NHS) faces unprecedented industrial action from staff still dealing with the aftermath of the hit to services from the COVID-19 pandemic, with a record 7 million patients on waiting lists for hospital treatment.

Thousands of British nurses will go on strike on Dec. 15 and Dec. 20 after the government refused to meet their pay demands, the Royal College of Nursing union said.

The British Medical Association (BMA), which represents doctors, said its junior doctor members would ballot for industrial action in early January after the government failed to meet their pay demands.
It has also said other groups of doctors it represents will consider their next steps, warning it is “on a collision course with the government”.

More than 15,000 ambulance workers across England and Wales are voting on strike action in a dispute over pay and working conditions.

Paramedics and ambulance workers including in Yorkshire, the North East, West and East Midlands, North West, East of England and the London Ambulance Service are voting on industrial action, the GMB union said.

The ballot closes on Nov. 29 and the union has said any potential strike action could take place before Christmas.
The Fire Brigades Union has also rejected a proposed 2% pay increase and said it is preparing for industrial action.

Teachers across Scotland have carried out strike action for the first time in almost 40 years after talks on a pay deal broke down.

Members of Scotland’s largest teaching union, the Educational Institute of Scotland (EIS), walked out of classrooms on Nov 24 and the Scottish Secondary Teachers’ Association (SSTA) has also announced two days of strike action on Dec. 7 and 8 over an ongoing pay dispute.

Hundred of thousands of teachers and education staff in England and Wales began voting in October on whether to carry out strike action in a dispute over pay and funding. The ballot closes in January.

The NASUWT union said it was balloting its roughly 162,000 members working in schools and colleges on industrial action in England and Wales for the first time since 2011.

More than 70,000 staff at 150 British universities have announced three days of strike action on Nov. 24, 25 and 30 demanding better pay, pensions and working conditions.

British postal workers at the century’s-old post and parcel company Royal Mail have held several rounds of strikes this year in a dispute over pay and working conditions.

The latest round of walk outs by members of the Communications and Workers Union (CWU) on ten days in late November and throughout December is expected to disrupt Black Friday and pre-Christmas deliveries.

Some 40,000 BT Group workers, including telecoms engineers and 999 emergency call handlers, carried out a series of national strikes in October in a dispute over pay.

The CWU, which represents workers at the BT Group and its networking arm Openreach, previously held similar walkouts in July and August.