Why are major cities in China witnessing anti-government protests?

People from major cities like Shanghai and Beijing are speaking out against the government’s ‘Zero Covid’ strategy, under which even a few cases of coronavirus lead to strict lockdowns. While the strategy has been in place for a while, here's why the protests are blowing up now. 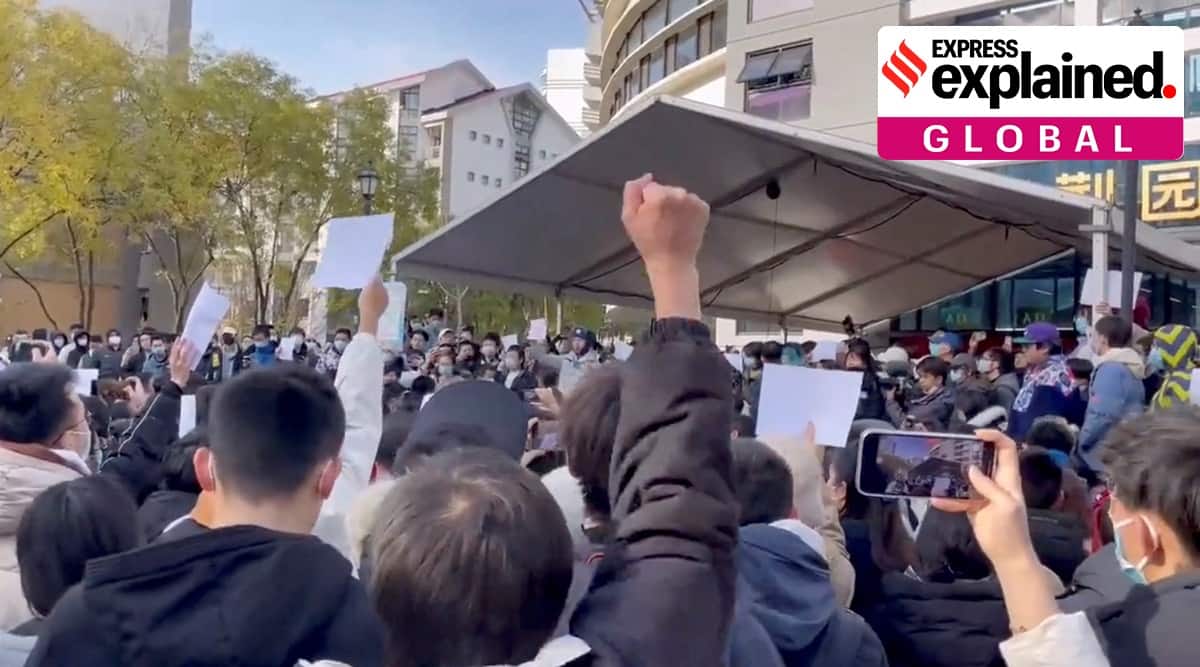 Students take part in a protest against COVID-19 curbs at Tsinghua University in Beijing, seen in this still image taken from a video released November 27, 2022 and obtained by REUTERS.

Amid rising coronavirus cases in China, with over 40,000 daily cases being reported on Saturday (November 26), unprecedented public protests are being witnessed despite heavy censorship and the government’s attempts to manage the situation.

People from major cities like Shanghai and Beijing are speaking out against the government’s ‘Zero Covid’ strategy, under which even a few cases of coronavirus lead to strict lockdowns, PCR tests, and restrictions on travel and day-to-day movement.

This policy has been in place since the pandemic began in 2020, even while other countries have largely moved away from harsh lockdowns. So why are protests taking place in China now, and what has changed?

The trigger in Xinjiang

It is believed the current protests are a result of the public’s long-term dissatisfaction with the policy – which has come to the fore because of a recent incident. On Thursday (November 24), a fire killed 10 people in a high-rise building in Urumqi, the capital of the restive Xinjiang region in northwest China. Crowds took to the street on Friday evening, chanting “End the lockdown!” and pumping their fists in the air, according to the AP. In Urumqi, some people have been locked down for as long as 100 days.

The crowd’s anger was heightened by the belief that the forced lockdown led to a greater number of deaths and difficulty in evacuation. Chinese officials have denied this, and during the weekend, Xinjiang Communist Party Secretary Ma Xingrui called for the region to step up security maintenance and curb the “illegal violent rejection of COVID-prevention measures”.

Interestingly, Xinjiang is also where a significant Uyghur population (an ethnic minority in China) resides. Many international organisations and governments in the West have alleged over the years that the treatment of Uyghurs amounts to a severe human rights violations at the hand of the Chinese government. Therefore, protests in Xinjiang are especially risky.

However, most protesters in the videos that have surfaced were members of China’s dominant Han ethnic group. Posts on Chinese social media were quickly deleted, which Beijing often does to suppress criticism.

It was soon reported that by the weekend, protests in China spread to its largest city, Shanghai. Demonstrators gathered at one of Beijing’s most prestigious universities. Candlelight vigils for the Urumqi victims took place at universities in other cities as well.

Also Read |Why over 20,000 recruits have left Apple supplier Foxconn’s plant in China

Videos from Shanghai showed crowds facing the police and chanting “Serve the people”, “We want freedom”, and “We don’t want health codes”, a reference to the mobile phone apps that must be scanned for entry into public places across China. Residents gathered on Saturday night at Wulumuqi Road – which is named after Urumqi – for a candlelight vigil that turned into a protest by Sunday.

Other cities that have seen public dissent include Lanzhou in the northwest, where residents on Saturday upturned Covid staff tents and smashed testing booths. Protesters said they were put under lockdown even though no one had tested positive.

Shanghai police used pepper spray against about 300 protesters, according to a witness. Nanjing in the east, Guangzhou in the south and at least five other cities showed protesters tussling with police.

So why has China continued with the ‘Zero Covid’ strategy?

China defends the policy as life-saving and necessary to prevent overwhelming the healthcare system, and to a degree, it has achieved success. The death toll and spread of infection have been lower in China when compared to other major countries.

On the flip side, public frustration has also accumulated. Further, anti-virus controls have periodically shut down Shanghai, one of the world’s busiest ports, and other industrial centres. Millions of families have been confined to their homes, depressing consumer spending, and the economy has been impacted due to these shutdowns.

Dan Mattingly, assistant professor of political science at Yale University, told the AP, “This will put serious pressure on the party to respond. There is a good chance that one response will be repression, and they will arrest and prosecute some protesters.” Still, he said, the unrest is far from that seen in 1989, when protests culminated in the bloody crackdown in Tiananmen Square.

Team Melli and the Socrates legacy