With Rajnath Singh’s comments at ASEAN meeting, a look at the attempts for a ‘Code of Conduct’ in the South China Sea

For the past 20 years, China has stonewalled any attempts to arrive at a binding Code of Conduct. Simultaneously, it has continued with expansionist activities, making the region extremely volatile. 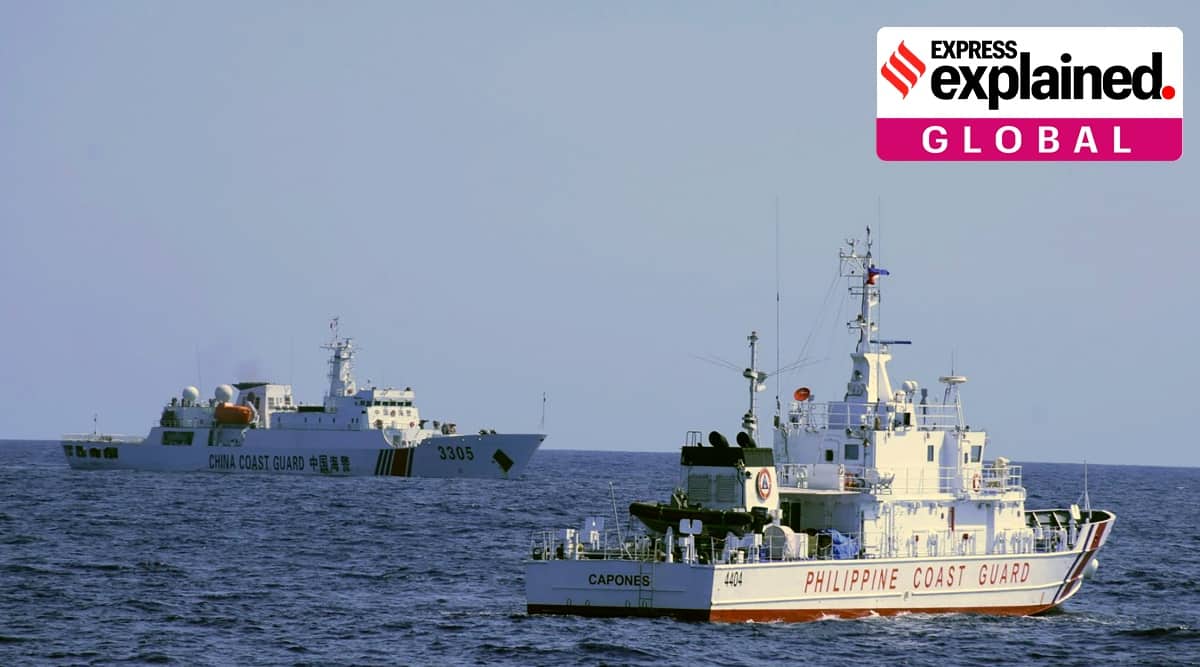 The South China Sea is one of the most contentious regions on the planet with multiple countries having territorial claims over its waters and islands. Amidst China’s growing military aggression, the fate of the region has become of global concern.

On Wednesday (November 23), Defence Minister Rajnath Singh addressed the ASEAN (Association of Southeast Asian Nations) Defence Ministers’ meeting in Cambodia. He expressed hope that the ongoing negotiations on the Code of Conduct for the South China Sea will be consistent with international law, particularly the United Nations Convention on the Law of the Sea (UNCLOS).

Emphasising India’s legitimate interests in the region, he said, “We believe that regional security initiatives must be consultative and development-oriented, to reflect the larger consensus… India stands for the freedom of navigation and overflight, unimpeded lawful commerce, peaceful settlement of maritime disputes.”

The Indian Express takes a look at the long-standing dispute at the South China Sea and the prospective Code of Conduct for the region.

What has the conflict in the South China Sea been about?

The South China Sea lies just south of the Chinese mainland and is bordered by the countries of Brunei, China, Indonesia, Malaysia, Philippines, Taiwan and Vietnam. As early as the 1970s, these countries began to claim islands (mostly uninhabited) throughout the sea to lay control over the various resources that the region possessed, such as untapped oil reserves, natural gas, and fishing areas. It also has some of the most active shipping lanes on the planet.

Today, China’s sweeping claims over the sea have antagonised other countries in the region. China claims the sea as its Exclusive Economic Zone (EEZ), arguing that other countries do not have the right to conduct any military or economic operation without its consent.

This claim is disputed by the southeast Asian countries and in 2016, the Permanent Court of Arbitration at The Hague issued its ruling on a claim brought against China by the Philippines under UNCLOS. It ruled in favour of the Philippines on almost every count. However, China, which itself is a signatory to UNCLOS, refused to acknowledge the court’s authority.

Recent satellite imagery of the region has had destabilising effects, showing China’s efforts to not only increase the size of existing islands but create artificial islands across the region. According to the Council on Foreign Relations, China has constructed ports, military installations, and airstrips in these islands — particularly in the Paracel and Spratly Islands, where it has twenty and seven outposts, respectively. China has also militarised Woody Island by deploying fighter jets, cruise missiles, and a radar system.

To protect the balance of power in the region, countries like the United States and Japan have come to the aid of the south-east Asian countries, providing them with military and economic aid.

What is the Code of Conduct for the South China Sea?

In 1995, China illegally occupied the Mischief Reef, just 210 km from the Philippine island of Palawan. Other ASEAN countries saw it as a blatant attempt to alter the status quo in the region.

As a response, ASEAN issued a Joint Communiqué in 1996 expressing concern over the situation in the South China Sea and calling “for the peaceful resolution of the dispute and self-restraint by parties concerned.” Further, a regional code of conduct was proposed, which would “lay the foundation for long term stability in the area and foster understanding among claimant countries.”

From Explained |UK’s apex court blocks Scotland independence vote: What is the demand about?

After years of painful negotiation between ASEAN and China, a non-binding, aspirational Declaration of Conduct (DOC) in the South China Sea was arrived at in 2002. This was supposed to be an important stepping stone for the creation of a binding Code of Conduct that would ensure peace and stability in the region. However, China continued occupying more islands and resorting to military activities, causing ASEAN countries to express concerns about their sovereignty and interests.

For the past 20 years, this has largely been the reality of the region. On one hand, China has stonewalled any attempts to arrive at a binding Code of Conduct. On the other, it has continued its own expansionist policies, making the region extremely volatile.

According to Ian Storey, a senior fellow at the ISEAS-Yusof Ishak Institute in Singapore, there have been three major sticking points that have stalled any progress towards a Code of Conduct.

Storey wrote in Foreign Policy, “First, what should the geographical scope of the agreement be? Should it include the Paracel Islands, as Vietnam wants but China doesn’t, or Scarborough Shoal, as the Philippines wants but China doesn’t. Second, should the COC [code of conduct] include a list of dos and don’ts? Beijing won’t want to tie its hands by agreeing to a ban on those activities. Third, should the COC be legally binding? Most ASEAN member states appear to support that, but China is opposed.”

In May 2017, ASEAN and China adopted a Framework of a Code of Conduct in the South China Sea intended to “facilitate the work for the conclusion of an effective Code of Conduct on a mutually-agreed timeline.” A year later, an agreement on a Single Draft South China Sea Code of Conduct Negotiating Text (SDNT) was agreed upon. While hailed as an important moment by some, others have been more cautious when it comes to its appraisal.

China’s position in the SDNT is based on the recognition of the nine-dash line, a line which marks China’s territorial claims, including a majority of the South China Sea. In 2016, an arbitral tribunal constituted under UNCLOS concluded that China’s historic-rights claim over the maritime areas (as opposed to land territories and territorial waters) inside the nine-dash line has no lawful effect if it exceeds what it is entitled to under the UNCLOS.

This has led to concern from countries outside the immediate region, calling on the ASEAN and China to ensure that the Code of Conduct is “consistent with existing international law, as reflected in UNCLOS.” A departure from UNCLOS while creating the Code of Conduct could open a can of worms, not just in the South China Sea but also in the rest of the world, wherever there are territorial or maritime disputes.

According to Capt. Raul Pedrozo (Ret.), who is a professor of international law at the U.S Naval War College, China’s sudden rush to complete a Code of Conduct has been on the back of its success in controlling and militarising the Spratlys, the Scarborough Shoal and the Paracels Islands. It has changed the status quo to an extent where “it has nothing to lose and everything to gain by concluding a Code of Conduct that solidifies its claims and advances its national security and economic interests in the SCS, all at the expense of ASEAN and a free and open Indo-Pacific region,” he wrote in the law periodical International Law Studies.

Rajnath Singh’s comments come in this context as countries such as India, the USA, and Japan caution ASEAN from arriving at a code of conduct that will only benefit China. As Capt. Pedrozo puts it, “will ASEAN diplomats be so obsessed with concluding the illusive Code of Conduct that they will lose their objectivity and accept a bad agreement rather than no Code at all?”

I do not need to visit astrologer, have enough strength in wrists to change my future: Maha CM Eknath Shinde