Shehbaz Sharif in Beijing amid domestic, global turmoil: Significance of the visit

Rarely do political leaders in countries with ambitious army generals go on visits abroad during high political turmoil. Sharif's visit seeks to make a political point, while the economic push of the CPEC tangle remains. We explain. 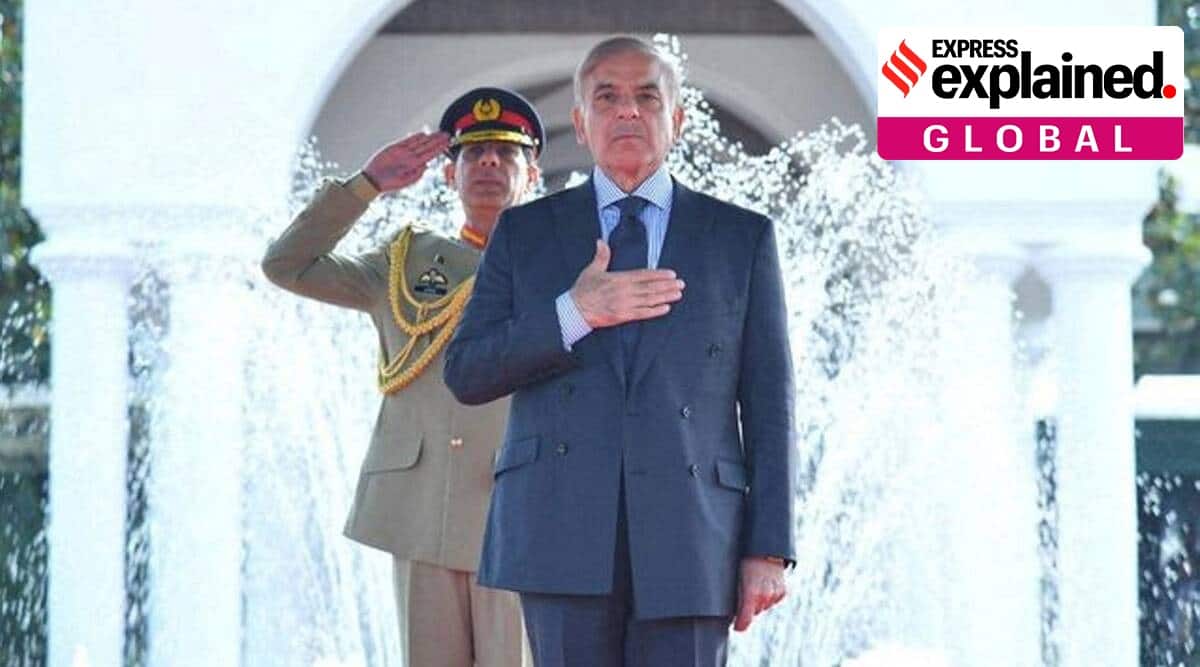 This is Sharif's first visit to Pakistan's “iron brother” since becoming PM, at a time his government and the Pakistan Army have been busy trying to salvage ties with the US. (Photo via Reuters)

Amid the political chaos at home with portents of big changes, Pakistan Prime Minister Shehbaz Sharif left for Beijing Tuesday on a two-day official visit, the first foreign leader to visit China since President Xi Jinping won a third term in office.

This is Sharif’s first visit to Pakistan’s “iron brother” since becoming PM, at a time his government and the Pakistan Army have been busy trying to salvage ties with the United States. Pakistan’s relations with the US were hit by a barrage of anti-America propaganda by former PM Imran Khan, who blames the Joe Biden Administration for his ouster.

The last foreign visit by a Pakistani head of government was by Imran Khan in February 2022, two months before he lost power. He went for the opening of the Beijing Winter Olympics – days ahead of Russia’s war in Ukraine – where Xi and Russian President Vladimir Putin reaffirmed their friendship as one “without limits”. Khan also visited Moscow soon after, his visit coinciding with Putin’s invasion of Ukraine.

Since then, the world has changed, and Pakistan faces the challenge of balancing between its close ties with China – which the Biden Administration has named as its biggest challenge after Russia in its national security strategy – and its longstanding partnership with the US.

Writing in Dawn on Tuesday, Maleeha Lodhi, Pakistan’s former ambassador to the UN and the US, has cautioned against Pakistan becoming part of any “anti-China coalition”, pointing out that this imperative “limits the space for expanding ties when Washington’s overriding goal today is to counter China’s increasing global power while Islamabad sees its strategic future to lie with China.”

Financial needs and the CPEC tangle

At the bilateral level, from Khan to Sharif, the stated aims of the visit are the same: looking to China for economic help.

Also in Explained |Experts Explain: How not to deal with China

As a Belt and Road Initiative partner, Khan believed he would renegotiate the terms of the China-Pakistan Economic Corridor (CPEC), which he and his ministers denounced as not in line with Pakistani interests. He also wanted to swing a financial bailout from Beijing to ease Pakistan’s economic woes. On both counts, he was cold-shouldered. While China said it would provide economic assistance, it added that more negotiations were required.

At the time, the South China Morning Post quoted Cheng Xiaohe, deputy director of the centre for international strategic studies at Renmin University, as saying, “China can’t replace the Pakistani government in taking care of its people.”

Sharif is on better ground, at least notionally. His government has secured the continuation of the IMF package that was stalled after the Khan government failed to fulfil conditions. Moreover, at the resumption, the package was increased from the earlier $6 billion to $6.5 billion. The IMF also released $ 1.1 billion to Pakistan in August, helping it avoid a debt repayment default.

The CPEC was negotiated by Shehbaz Sharif’s brother Nawaz Sharif when he was prime minister from 2013-2016. China was less than happy with the Khan government’s half-hearted participation in, and periodic denouncements of, this crucial project in Xi’s BRI.

Advertisement
From Explained |How China, UAE are helping Pakistan tide over its economic crisis

Earlier billed as a $ 42-billion project and revised later to a more ambitious $ 67-bn project, the CPEC has struggled to move beyond the $25-bn mark – China’s own economic troubles are one part of the problem, but the other has to do with Pakistan’s reluctance or inability to invest as Beijing wants it to. Many projects also ran into local difficulties.

On taking charge, the Sharif government ran a forensic audit of CPEC and he blamed his predecessor for “effectively ruining” the multi-billion dollar project. As reported by The Express Tribune of Pakistan, only three out of 15 projects in Gwadar, valued a little over $300 million, were completed, while 12 schemes of about $2 billion, concerning electricity and water supply and provision, remained unfinished. Sharif has resolved to galvanise work.

The recent killings of Chinese nationals in Karachi and elsewhere are the latest cloud on the project, with security fears high.

“As a game-changer for Pakistan and subsequently for the broader region, CPEC is the central pillar of my government’s development agenda…CPEC’s next phase of high quality development will encompass key areas such as industry, energy, agriculture, ICT, rail and road network and developing Gwadar Port as a hub of trade and transhipment, investment and regional connectivity,” Sharif wrote in his op-ed article. He added: “Safety and security of Chinese personnel and projects in Pakistan remains our top priority. The loss of precious Chinese lives in Pakistan is our loss… My government would spare no effort to bring to justice the perpetrators of these reprehensible acts.”

But Sharif will have a lot of convincing to do, as China appears to have scaled down its expectations and plans for the CPEC.

Also Read |A reign with no reins: China of, by and for Xi Jinping

Sharif has also said that as China is Pakistan’s largest trade and investment partner, “we want to expand these ties” and under the terms of the existing Free Trade Agreement, has offered Pakistan “as the manufacturing base for China and an extension of its industrial and supply chain network”.

Significance of the visit

The problems with the CPEC have not impacted other aspects of the strategic partnership between the two countries. China continues to support Pakistan against India at the UN Security Council (as seen in the repeated blocks by Beijing on joint India-US proposals to designate two Lashkar-e-Taiba operatives).

Army chief General Qamar Javed Bajwa’s unusual “farewell” visit to Beijing in September before after a similar visit to the US – he is due to step down at the end of November – framed the enduring military ties between the two countries.

Sharif’s visit will find resonance in the ongoing political theatre of Pakistan, where Imran Khan repeatedly describes the present dispensation as “an imported government”, an allusion to his allegation that the US was behind his removal from office. Khan has repeatedly invoked India’s neutral stand in the Russia-Ukraine war to rail against Pakistan’s failure to adopt an “independent” foreign policy, even though Pakistan’s defiant embrace of China in these fraught times is a bit like India’s Russia policy.

Rarely do political leaders in countries with ambitious army generals go on visits abroad during high political turmoil. Sharif’s visit seeks to make a political point – which will not be lost in Beijing too – that he is confident enough to do so. But he will also be hoping that he does not return to a dramatically changed country.