Who was Mohsen Shekari, the first person to be executed in Iran’s crackdown against protesters?

Shekari was a cafe worker who allegedly tried to stop security forces from attacking people who were protesting against the killing of 22-year-old Mahsa Amini. Dozens more could be executed as the regime seeks to crush the street protests. 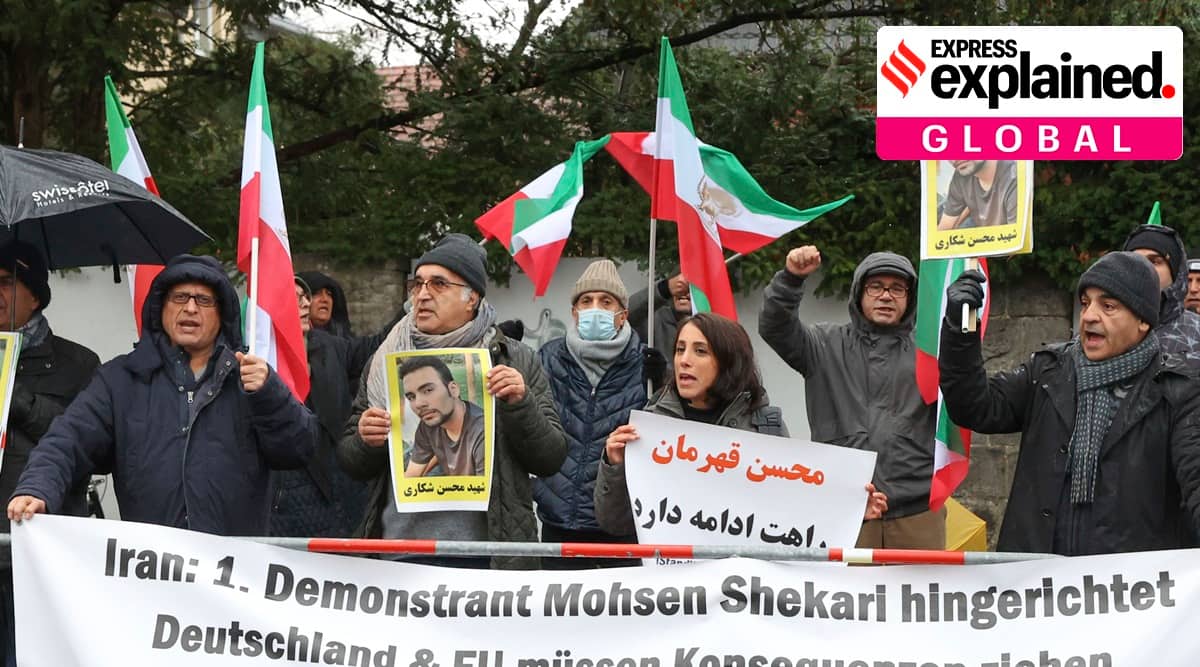 People protest in front of the Iranian embassy in Berlin, Germany, Thursday, Dec. 8, 2022 against the execution of Iranian Mohsen Shekari. Slogan reads: 'Iran: 1st protester Mohsen Shekari executed, Germany and the EU have to take consequences'. (Joerg Carstensen/dpa via AP)
Listen to this article
Who was Mohsen Shekari, the first person to be executed in Iran’s crackdown against protesters?
x
00:00
1x 1.5x 1.8x

The Iranian government said on Thursday (December 8) that it executed a young man named Mohsen Shekari, convicted of allegedly attacking a member of the Iranian security forces during the ongoing nationwide protests that began in September this year.

This is the first death penalty carried out by the government against a person involved in the protests. The regime had announced around two weeks ago that an execution would take place.

Following the death of 22-year-old Mahsa Amini, allegedly while being detained by the morality police for “incorrectly” wearing the mandatory hijab, protests on a scale that haven’t been witnessed in the country in four decades have continued even as the government has continued its crackdown.

The execution took place days after reports that Iran’s public prosecutor had made comments about the morality police being shut down. However, there was no confirmation from the government, and the execution suggests there is no softening in the regime’s position.

Who was Mohsen Shekari and what was he accused of?

Shekari used to work in a cafe and when he saw security forces attacking protesters, he attempted to block their path on a highway, The Guardian reported, quoting an uncle of the executed man. He said the family was facing problems with having his body returned, and Shekari’s mother had been “repeatedly warned” not to publicise her son’s arrest. Signs of torture were visible on Shekari’s face, the uncle added.

According to Mizan, an Iranian news agency that is backed by the country’s judiciary, Shekari was accused of blocking a street and then attacking a member of the security forces with a machete.

Mizan also alleged that Shekari had said he had been offered money to carry out the attack. Iran has long maintained that the agitations against the government were being funded by the United States and Israel.

Shekari was convicted by Tehran’s Revolutionary Court, which typically holds closed-door hearings, the AP reported. Iranian state television broadcast a video showing the courtroom and parts of Shekari’s trial presided over by Judge Abolghassem Salavati, who is under US sanctions for meting out harsh punishments in the past.

Who else has been accused in the government’s crackdown against the protests?

Iran’s judiciary had said in November that a Revolutionary Court in Tehran had sentenced an individual to death for setting fire to a government building and for “waging war against God”, which is punishable by death in the country.

The nonprofit organisation Iran Human Rights had reported at the time that at least 20 other protesters too were facing charges that are punishable by death. Mohsen Shekari’s arrest, trial and execution took less than two and a half months, the BBC reported.

According to Iran’s Human Rights Activists News Agency (HRANA), as many as 348 protesters have so far been killed in the crackdown, including 52 children. The number of detainees has neared 16,000, of which more than 450 are students.

How have Western countries reacted to the government’s actions?

Governments of the UK, Germany, and France have condemned Shekari’s execution. US Secretary of State Antony Blinken said America was “appalled”.“Our message to Iran’s leadership is clear: End this brutal crackdown,” Blinken wrote on Twitter. “We will continue to hold the Iranian regime accountable.”

The European Union said it condemned the execution “in the strongest possible terms”.