The US statement on China was in sharp contrast to the repeated condemnations of Iranian authorities for their months-long efforts to put down their protests. Here is what is happening, and why. 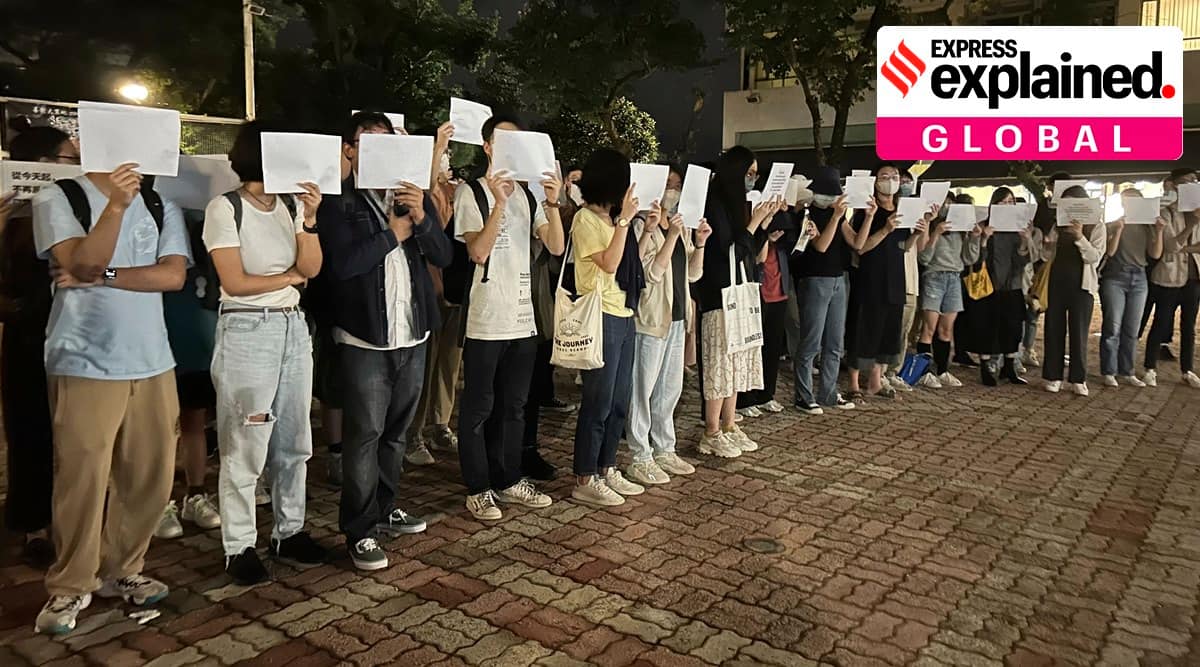 Protesters hold up blank white papers during a commemoration for victims of a recent Urumqi deadly fire at the Chinese University of Hong Kong in Hong Kong, on Monday, November 28, 2022. (AP Photo)

The surprise eruption of protests in China over COVID-19 lockdowns presents President Joe Biden with his latest challenge in balancing an embrace of democracy with the need to prevent a fast-decaying relationship with an autocratic nation from rupturing.

The White House reacted cautiously Monday to the scenes of Chinese citizens denouncing the country’s zero-COVID policies and the revival of widespread censorship. In a statement, repeated almost verbatim in the White House press room by John F. Kirby, a spokesperson for the National Security Council, the administration said only: “We’ve long said everyone has the right to peacefully protest, in the United States and around the world.”

“The president is not going to speak for protesters around the world,” Kirby, a former State Department and Pentagon press secretary who has juggled such questions repeatedly, told reporters who pressed him for a stronger statement. “They’re speaking for themselves.”

The statement was in sharp contrast to the repeated condemnations of Iranian authorities for their months long efforts to put down protests against Iran’s government, and particularly their enforcement of regulations that women must wear a hijab. But administration officials said that the situations were not comparable, and that they had doubts that the protests that played out on the streets of Beijing and Shanghai over the weekend would be sustained, or that the calls for an end to COVID-19 restrictions amounted to a fundamental call for government change. The officials spoke on the condition of anonymity to discuss sensitive deliberations.

Instead, the administration focused on the substance of China’s COVID-19-containment policies, rather than on any police response to the protests.

Zero-COVID is not a policy that the United States is pursuing, the White House said in a statement. “And as we’ve said, we think it’s going to be very difficult for the People’s Republic of China to be able to contain this virus through their zero-COVID strategy.”

“For us, we are focused on what works, and that means using the public health tools like encouraging Americans to get their updated vaccine and making testing and treatment easily accessible.”

The calculus about how vocally to support the protesters is a difficult one. Biden has cast the competition with China as the first example of what he calls a struggle between “autocracy and democracy,” and he has insisted that he will call out abuses by authoritarian governments around the world.

But any encouragement of the street protests would almost certainly be seen in Beijing as an effort to destabilize President Xi Jinping of China, right after he met Biden for a 3 1/2-hour session in Bali this month. Already the Chinese government has accused the United States of pursuing a “containment” policy — a phrase from the Cold War — by limiting China’s ability to import semiconductor production equipment and by restricting the sales of Chinese communications equipment inside the United States.

But administration officials say they see a distinction between banning products that could help the Chinese military and trying to destabilize China’s domestic politics. And at a moment when Biden is seeking continued restraint from China in supporting Russia in its war with Ukraine and to resume cooperation on climate issues, North Korea and other projects that Washington and Beijing once worked on regularly, the White House wants to pick its fights with care.

There is also concern that the appearance of backing the protests, even just rhetorically, could deepen suspicions.

“The danger of exaggerating the scope of the protests is that American media will lend credence to Chinese government claims that these tentative, spontaneous demonstrations are the result of a foreign plot,” said Robert Daly, the director of the Kissinger Institute on China and the United States at the Wilson Center in Washington. “Beijing will intimidate demonstrators by saying they are participating in a color revolution.”

Daly noted that the nature of the protests was unclear. “This is neither a revolution nor a movement yet, and it probably won’t become one,” he said.

In fact, there were no demonstrations evident Monday, and he noted that the protesters were mostly seeking “the freedom to live everyday life that they had before COVID.”

“True, there were calls for Xi and the party to step down at demonstrations in Shanghai,” he said, “but the scale was extremely limited.”

Advertisement
Explained |What is a ‘zero-Covid’ strategy?

The White House’s focus on the immediate origins of the protests — the COVID-19 restrictions — stepped around the other element of the demonstrations, in which blank sheets of paper were held up. It was a way around laws that ban pro-democracy slogans and that consider some of them sedition.

A year after declaring that the struggle between democracies and autocracies is the central issue of this era, Biden has confronted similarly difficult issues.

On a summer trip to Saudi Arabia, seeking to rebuild the foundations of the relationship with a country he once labeled a “pariah” state, the president fist-bumped the prime minister, Crown Prince Mohammed bin Salman.

The administration thought it had reached a quiet deal for the Saudis to increase oil production this fall. Instead, OPEC nations that included Saudi Arabia announced a production cut, forcing a furious Biden to announce that he was ordering another review of the relationship. That review is still underway.

As for China, Kirby said only that “the president is staying briefed on what is going on.”