Imran Khan attack: The violence was an ominous and uncanny throwback to the deadly bombing of Benazir Bhutto's long procession from Karachi airport on her return to Pakistan on October 18, 2007. 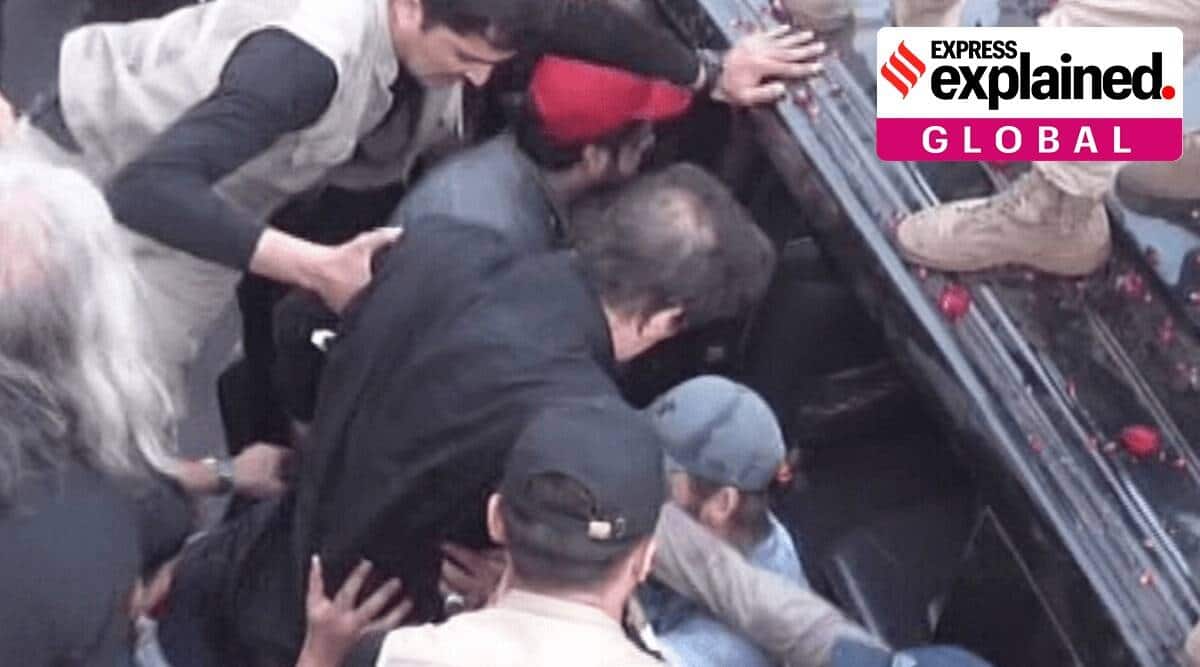 Imran was at a rally in Pakistan's Punjab province when the shooting took place. (Photo: Dawn)

The gun attack on Imran Khan, which injured him and six other workers of his party, and killed one person, is set to escalate the ongoing confrontation between the former Prime Minister and those he sees as obstacles to his return to power – the Shehbaz Sharif government and the Pakistan Army’s top leadership.

Khan, who escaped with gunshot injuries to his leg, raised the stakes immediately by naming three persons he alleged were behind the attack – Prime Minister Sharif; Interior Minister Rana Sanaullah, and a “Major General Faisal”, a reference to Major General Faisal Naseer, head of counter-intelligence at ISI, brought in during a recent round of transfers from Balochistan, where he was involved in special operations.

The assailant was captured soon after he fired at Imran Khan. (PTI Photo)

The alleged assailant was caught on the spot, but few in Pakistan believe he was acting alone as he claimed during his questioning by the police, as seen in a widely circulated video. How a police interrogation found its way to social media has raised more questions.

After the killing in Kenya of the journalist Arshad Sharif, who made no secret of his support for Khan, there was a sense of foreboding, even panic, among Khan’s loyalists, a feeling that this confrontation would claim more lives. Two other journalists fled the country.

The threat of violence hung over Khan’s “long march” before it began on October 28. Days earlier, a member of Khan’s Pakistan Tehreek-e-Insaf, held a bizarre press conference at which he predicted large-scale violence, seemingly warning off people from joining the march.

Also Read |Imran Khan attack: how the event unfolded, what’s next for Pakistan

“There will be bodies everywhere, there will be blood, there will be more bodies,” he declared. Puzzled, journalists tried to decode why a Khan supporter would make a statement that sounded more like a threat to his leader. Many concluded he was carrying a message from the “establishment” and Khan sacked him from the party.

The long march itself saw a format change which, in hindsight, may have been security precautions. Unlike other long marches – and Pakistan has a long history of this type of political protest – Khan announced that the procession would set off every morning at 11 am and stop at 5 pm, which many saw as a damper.

Friday’s violence was an ominous and uncanny throwback to the deadly bombing of Benazir Bhutto’s long procession from Karachi airport on her return to Pakistan on October 18, 2007.

That, too, was a time of an expected transition, both in the military and in the country’s politics. Benazir Bhutto and the then military ruler Gen Pervez Musharraf had made a deal that she would return to Pakistan from exile, contest the election and become Prime Minister while he remained President. But Bhutto wanted him to step down as Army chief first before fully signing off on the deal. Musharraf wanted her not to return before she agreed to his terms. But as soon as he signed off on an ordinance that did away with all charges of corruption against her, she defied him and landed at Karachi airport to a rapturous welcome. Her procession, with her sitting on top of a bus, took hours just to reach the main road from the airport.

Late that night, it was attacked. Some 200 people were killed. Bhutto survived. While official suspicion fell on the Tehreek-e-Taliban chief Beithullah Mehsud who had made threatening remarks against her just before her arrival, and the Al Qaeda, Bhutto wrote to Musharraf naming persons In Musharraf’s government she suspected of being the hidden hands behind the attacks — Chaudhry Pervaiz Elahi, then the chief minister of Punjab province; former ISI chief Hamid Gul, and the serving IB chief Ijaz Shah. Two months later, she was assassinated at a rally.

Imran Khan is hardly a Benazir Bhutto but he is as wildly popular as she was, having successfully sold his followers the story of his “unjust” removal by “thieves” – a reference to Prime Minister Sharif and his brother Nawaz Sharif — in collusion with “Mir Jafars and Mir Sadiqs” — a reference to the Army chief General Qamar Javed Bajwa, and his ISI chief Lt. Gen Nadeem Anjum, “traitors” to him because they refused to help him overturn the no-confidence motion against him.

Like in 2007, the Army is due for a change of chief at the end of this month. Fifteen years later, the country is yet again at a turning point, with all eyes on Bajwa, and his possible successor.

Khan’s long march was aimed to put pressure on both the Army and the government to agree to an immediate election. It is due next year but Khan wants one now because he is confident of winning it. The deliberately slow pace of the long march seemed also to suggest that Khan was timing his entry to Islamabad for after the transition in the Army, perhaps with a view to negotiate with Bajwa’s successor.

Also Read |Sharat Sabharwal writes: Out of power, Imran Khan continues to be powerful in Pakistan

The attempt on Khan’s life now puts even Bajwa and Sharif in a tighter corner. The pause on the march, unfortunate though its circumstances are, may provide an opportunity for all parties to step back, and work for a resolution to the political conflict that has engulfed Pakistan for many months.

Khan has vowed to continue his march. “I will not bow down, but stay determined to bring Haq­eeqi Azadi (real freedom) for my fellow Pakistanis,” he said.

Pakistan’s history provides an example. In 1993, the then Army chief, Gen Waheed Kakar, negotiated an end to a political confrontation between the then Prime Minister Nawaz Sharif and President Ghulam Isaq Khan, with Benazir Bhutto leading a long march into Islamabad at the same time demanding an immediate election. Bhutto got her wish. Sharif resigned, and his condition that the President must resign was also met. The Army kept its hands off the election, which Bhutto won. Will it be the “Kakar formula” again?

Or will the Army think its interests would be better served by intervening in some other way than have Imran come back, which he certainly will, if an election is held. The Pakistan Army sees itself as an “institution”, and Khan’s attacks against Bajwa have divided the Army horizontally. Assuming Bajwa is leaving at the end of this month, much will depend on his successor and what damage control measures he will take to restore the army’s image and its unity, as well as his assessment of the military’s place and the place of an elected politician in Pakistan’s delicate civil-military balance.

How we can achieve growth with balance