Amid protests in China, recalling Tiananmen Square: What happened that day, what led up to it

Tiananmen Square did not happen in a day — factors over decades led up to it. Here's its history. 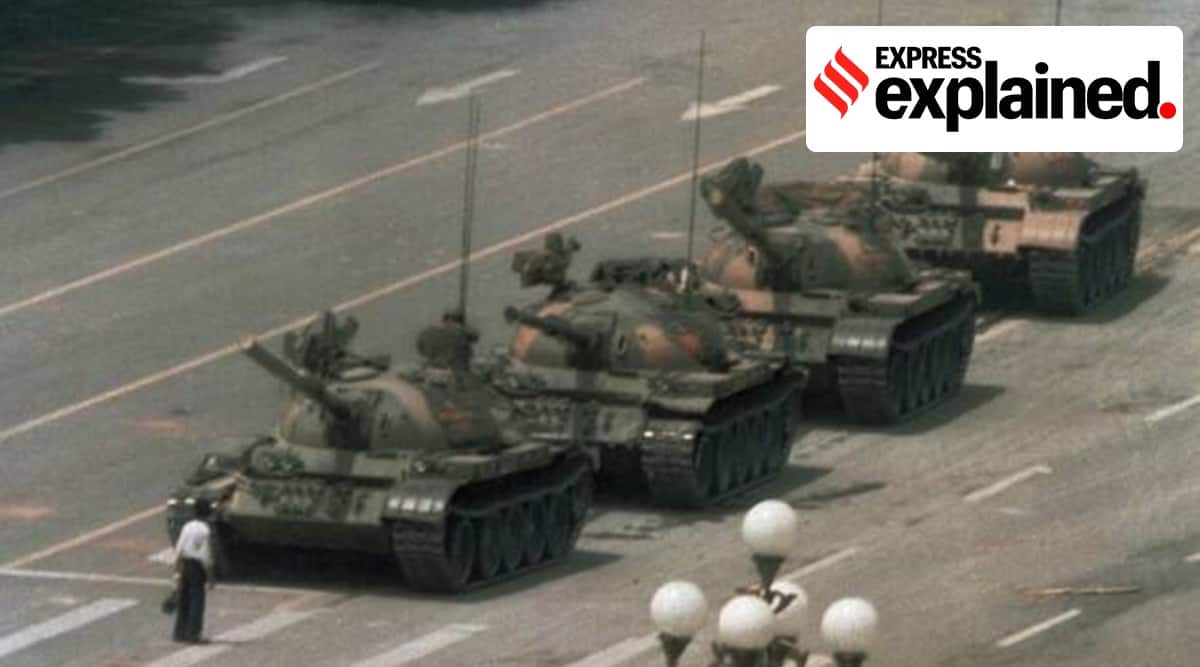 A lone Chinese man standing to block a line of tanks heading east on Beijing's Changan Blvd. near Tiananmen Square. (Photo via AP)

As China, where the Covid-19 virus first hit, continues to live under the pandemic’s shadow, unprecedented protests have broken out, many believe on a scale not seen in the country since 1989.

On Thursday night, 10 people died in a fire at an apartment complex in Ürümqi, the capital of the western Chinese province of Xinjiang. The people had been locked in their apartments due to China’s strict home isolation policies. Since the incident, protests have picked up across the country, with calls to end the brutal curtailment of people’s freedoms in the name of Covid. As they gather steam, these protests have increasingly drawn comparisons to the protests of the late 1980s that culminated with what happened in Tiananmen Square in 1989.

What were the Tiananmen protests, what led to it, and what is its long-lasting legacy? We explain.

To understand the Tiananmen protests, one must take a look at the previous decades when the communist regime undertook some radical steps, which ultimately fell short of their idealistic goals while causing much tumult in Chinese society. The communists came to power in China in 1949, with Mao declaring the birth of the new nation from Beijing’s Tiananmen Square. Much like the Soviet experiment previously, China was “not prepared” for the revolution in the Marxist sense: its economy was largely feudal or proto-capitalist, with a weak industrial base and a society that was highly stratified along different lines.

To overcome this situation, Mao launched the “Great Leap Forward” in 1958. This was a campaign to organise China’s vast population to meet its industrial and agricultural problems. This was done through the creation of different modes of living and production, notably large-scale rural communes and organised urban factory spaces (that required mass migration of workers from rural China).

These would be directed to produce specific products and commodities in accordance with China’s central plans. The Great Leap Forward would ultimately fail due to poor agricultural processes, complications arising from mass movement of the population and adverse weather conditions, culminating with a great famine between 1959 and 1961 that killed millions. This failure would harm Mao’s personal position in the Chinese Communist Party (CCP) leadership.

Mao felt that this debacle was due to China’s deeply rooted traditional society, moored to age-old loyalties and a culture that was incongruent with the ideals of socialism. Hence, in 1966, he rolled the dice once again, setting the “Cultural Revolution” in motion. The Cultural Revolution was a sociopolitical movement aimed at transforming the society in accordance with socialist principles, as well as restoring Mao’s status in the CCP by the means of a Stalinist purge.

Chairman Mao gave licence to Chinese youth to destroy the so-called four “olds” or perceived enemies of Chinese culture: customs, habits, culture and thinking. In the early years, chaotic “tyranny” prevailed, which saw schools and temples destroyed as people turned on each other. “Enemies of the revolution” were beaten, captured, executed and exiled.

As Chinese society plunged into anarchy, the Chinese state and its military gathered greater authority, stifled dissent, and fashioned a personality cult around Mao. At its height, the Cultural Revolution saw the Chinese state rule with a gun in one hand and Mao’s propagandising Little Red Book in the other.

The Cultural Revolution left Chinese society, economy and bureaucracy in tatters. While the campaign was petering out by the mid-1970s, Mao’s death in 1976 was its final nail in the coffin. After nearly three decades of the Revolution, China was in dire economic straits with a fractured society and a trail of bloodshed and death. It was time for the country to take a different direction.

The 1980s: reforms and protests

In 1978, China announced far-reaching economic reforms, termed by the party as “socialism with Chinese characteristics.” The Chinese government abandoned Maoism in favour of market-oriented reforms that would give a boost to the stagnant economy. Starting with the de-collectivisation of agriculture, the government undertook further steps to invite foreign investment and encourage private enterprise.

What followed was an economic boom in the 1980s. Previous generations had lived through indescribable hardship, from forced migration to religious persecution, from food rationing to wanton violence. The 1980s were starkly different. Living standards were rapidly improving. There were more opportunities to work. The population was filled with hope.

From Explained Global |Shamima Begum, terrorist or victim: As the UK hears her case, here’s her story

But while the economic reforms brought rapid changes in Chinese society, political reforms did not follow suit. Many had expected “political opening up” to follow the economy: yet the CCP was very much divided over this issue. Hardliners wanted strict state control whereas more progressive wings of the party hoped for greater democracy. The CCP faced a crisis of identity: on one hand, it had taken the direction to lead China to a full-blown market economy, on the other, as a communist party, it continued to derive its legitimacy from principles of socialism.

Further, China’s nascent market economy was a breeding ground for corruption and sycophancy. It benefitted some people far more than it benefitted others. Nepotism was common during hiring in private companies. There was growing inflation. While China had opened up new universities and educational institutions, it faced a major manpower crunch in various sectors of its economy as the effects of the Cultural Revolution continued to be felt.

Expectations post the reforms were high but there was also increasing discontent. By the mid-1980s, there were protests in many places. Protestors called for greater freedom of speech, removal of censorship, and overall democratisation of the Chinese polity. They also expressed frustration over corruption and nepotism in the government and private enterprises.

These protests were often led by students and the youth. College campuses became hotbeds of dissident activities. The first generation of students who had gone abroad to study would often return with new ideas on freedom, governance, and society. The protests of the 1980s would come to a climax in 1989 with the Tiananmen Square protests and the subsequent repression by the Chinese State.

The Tiananmen Square protests of 1989

The spring of 1989 saw protests grow in the immediate aftermath of the death of Hu Yaobang. Hu was a popular leader and the former General Secretary of the CCP. Known for his “liberal opinions”, he was a key player in formulating and executing various reforms that were taking place in China in the 1980s. As protests grew in the mid-1980s, party hardliners blamed Hu’s “bourgeois liberalism.” Hu would speak about major problems with communist economics, human rights, and problems with China’s one-party system. For party hardliners, Hu was a source of much concern.

Advertisement
Don't Miss |Experts Explain: How not to deal with China

In 1987, he was forced to resign due to his refusal to act against three young communist leaders who openly spoke about the need for political reform in China. His resignation made him very popular among Chinese protestors and liberal intellectuals. He was seen as a martyr of sorts, maintaining the force of his convictions amidst the immense backlash from the CCP.

His sudden death in 1989 galvanised protestors in China who gathered on university campuses eulogising Hu and blaming the Party for his demise. Small groups of protestors began organically gathering at the Monument to the People’s Heroes at Tiananmen Square in Beijing to mourn Hu’s passing. On April 17, around 3000 students from Peking University marched to Tiananmen Square, demanding greater freedoms and accountability from the government. On the day of his funeral on April 22, more than 100,000 people had gathered at the Square, ignoring orders from the authorities.

In the first two weeks of May, the protests at Tiananmen Square escalated. Students began participating in hunger strikes and the demands grew louder. With the impending visit of Soviet leader Mikhail Gorbachev who was supposed to be welcomed at the Square, more than 300,000 protestors gathered, with many travelling to Beijing from all over China to participate. Gorbachev had to be received at the airport, causing China major embarrassment.

On May 17 and 18, around a million protestors from all walks of life, including from the lower levels of the Party and the bureaucracy, participated in the protests. By now, the world’s attention had turned to the happenings in Tiananmen Square.

Elsewhere in China, protests were picking up. There were around 400 cities which saw some form of protest. Shanghai, Wuhan, Changsha, and X’ian saw protests which turned violent. Rioters vandalised public property and burnt cars. As the situation turned increasingly volatile across the nation, the CCP itself was divided about how to respond.

The Response from the Party

Initially, progressives in the CCP like Zhao Ziyang made conciliatory overtures to the protestors. However, most CCP hardliners advocated for much stronger measures. As the nation was engulfed in the flames of dissent, the CCP sensed an existential threat to its authority and decided to push back.

On May 20, martial law was declared with as many as 250,000 troops from the People’s Liberation Army (PLA) being sent to Beijing. Surveillance of dissident figures was stepped up and censorship strengthened. At this time, amidst mounting pressure from the government, the protestors also started to fall in disarray. Tiananmen Square had become increasingly dirty and overcrowded, and there were growing divisions and infighting in the leadership of the protestors. After weeks of occupation of Tiananmen Square, the protesters were tired. Some historians would later point out that at this moment, the CCP could have perhaps made some basic concessions and placated the protestors, preventing the bloodbath that would follow.

However, the government began using the press and other media to discredit the protestors, calling them counterrevolutionaries and western sympathisers. This was not only to fracture the protests even further but also to internally justify the actions it was about to take.

On June 3, the protests turned violent as permission was granted to the military to “use any means necessary” to clear Tiananmen Square. The state-run television warned all citizens to stay indoors as the military moved in.

Over the next two days, Tiananmen Square would be cleared leaving a trail of death behind. At the time when the troops moved into the square, there were still close to 100,000 protestors on the site. Tanks drove through the crowd, crushing students to death. Live ammunition was used indiscriminately with reports of the forces firing even at fleeing protestors.

While the number of deaths is disputed, there is no doubt that the official number of around 300 protestors dead massively undercounts the reality. Other estimates range from between 500 to 3000 civilian deaths. Regardless, the CCP’s ruthless response brought a swift end to the protests, ushering in a new era of Chinese authoritarianism and state control.

The legacy of the Tiananmen Square protests

The immediate aftermath of the protests saw a number of arrests and prolonged persecution of people who might have even been remotely associated with the protests. The CCP also went through another purge: all progressive leaders who were against the use of military force were eventually sidelined with a new breed of leaders emerging. Some officials and members of the CCP were also formally charged for the happenings of 1989.

Over 33 years have passed since the protests of 1989. Since then, China has grown into one of the largest economies in the world and a superpower in all senses of the term. The Chinese government and the CCP have left no stone unturned to forget 1989.

Even today, social media posts or any political action about the protests and subsequent repression are removed and can even land people in prison. In December 2021, Hong Kong media mogul Jimmy Lai was sentenced to 13 months in jail for participating in a vigil marking the anniversary of the massacre.