India, with the largest pool of poor people on the planet can learn a lot from China, which pulled 765 million out of extreme poverty between 1978 and 2018; that’s roughly 2 crore people being pulled out of abject poverty every year for four decades. 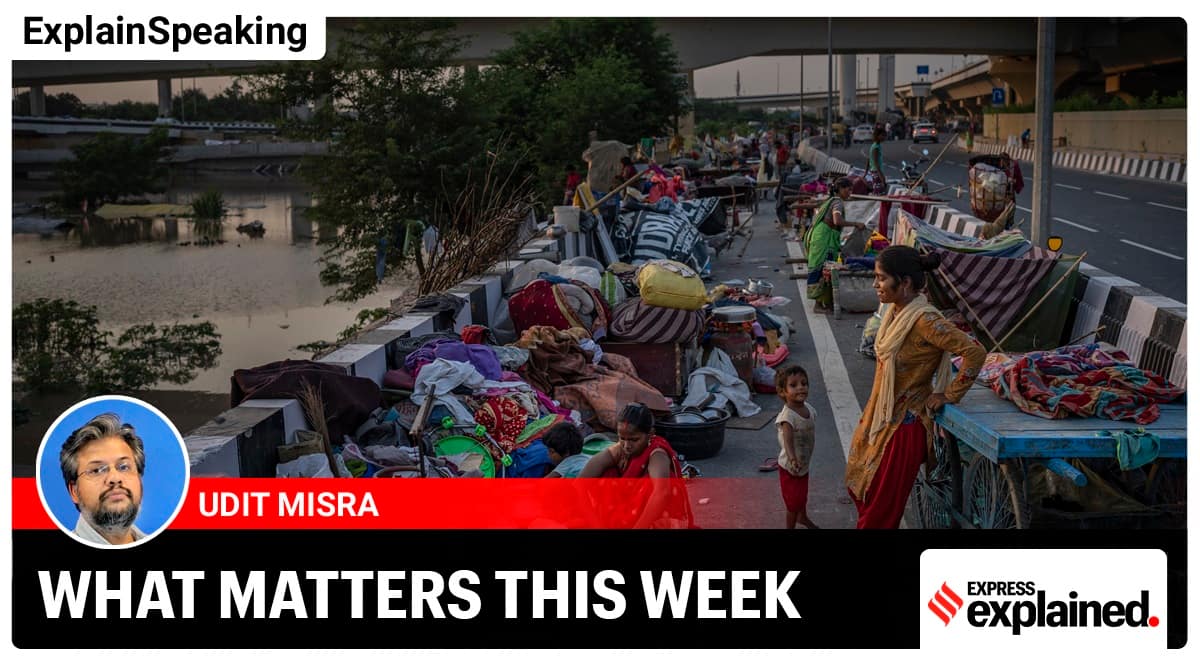 According to the WB, India is the country with the highest number of poor people. (Representational Photo/AP)

Last week, the World Bank released its latest report on global poverty. It stated that “economic upheavals brought on by Covid-19 and later the war in Ukraine” had produced “an outright reversal” in poverty reduction across the planet. The pace of poverty reduction had been slowing down anyway since 2015, thanks to a slowdown in growth rates but the pandemic and war have caused an outright reversal. So much so that the “world is unlikely to meet the goal of ending extreme poverty by 2030”.

What is extreme poverty? How is it defined?

The World Bank (WB) defines extreme poverty by particular consumption level. This is called the poverty line and it is pegged at US$2.15. In other words, anyone living on less than $2.15 a day is considered to be living in extreme poverty. About 648 million people globally were in this situation in 2019.

But if you did a mental calculation — multiplying 2.15 by the rupee’s current market exchange rate with the US dollar (around 82) — and arrived at Rs 176 a day as the Indian equivalent of the international poverty line, you’d be wrong.

That’s because this $2.15 level is based on purchasing power parity (PPP). Simply put, the PPP equivalent of $2.15 is the number of Indian rupees an Indian would need to buy the same basket of goods in India that an American can buy with $2.15 in the US. That equivalent in India is Rs 46, not Rs 176. This difference happens because the price of the same goods is different in different countries and it is quite likely that a dollar in India buys far more of the same commodity (say, an egg or banana) or service (say, a haircut) that it buys in the US.

So, the international poverty line of $2.15 implies that any Indian who spends less than Rs 46 a day — in total — is considered to be living in extreme poverty. Try to recall the last time when your daily expenditure was that low and you’d understand why this is called the poverty line for abject or extreme poverty.

What has the World Bank stated about India’s poverty levels?

According to the WB, India is the country with the highest number of poor people (see CHART 1). According to the report, the number of people living in abject poverty increased by 56 million (5.6 crore) in 2020.

What’s worse, when the World Bank used the data from the Centre for Monitoring Indian Economy (CMIE), it found that the number of people living in abject poverty increased by 56 million (5.6 crore) in 2020. That’s almost 80% of the total 70 million the world over that the World Bank estimates to have been pushed into poverty in 2020. In other words, according to this estimate, 8 out of every 10 people in the world who were pushed into poverty during Covid were in India.

India’s problem, however, isn’t just that it has the largest number of people in the world living below the extreme poverty line. According to the Bank, close to 600 million Indians survive at less than $3.65 (Rs 84) a day level of expenditure.

Now many may simply wish to deny or dispute these figures, partly because they use CMIE data. But the only reason why the World Bank was forced to use data from CMIE is that there are no official estimates of poverty available since 2011. “The government decided not to release the 2017/18 NSS round because of concerns about data quality,” it states.

Moreover, estimates of absolute levels of poverty in India, albeit unofficial, had been going up even before Covid and the war in Ukraine further impoverished Indians. Watch this episode of The Express Economist with Prof. Santosh Mehrotra of the University of Bath (UK) on what has been happening to poverty in India since 2011.

Who can India learn from?

Over the past week, there has been some acknowledgement, albeit in the RSS, that India faces three rather acute and growing problems: Widespread unemployment, widening inequalities and deepening poverty.

And here’s the genuinely salient point: None of these will be resolved by electoral victories. They require actual policy solutions. Without the right policies, India’s demographic dividend is looking more like a demographic bomb.

But there is one country — China — which is not only comparable to India in terms of the population size but is also globally recognised to have alleviated poverty at historically unprecedented speed and scale.

Perhaps, understanding what China did may provide some clues to Indian policymakers.

What did China achieve?

Intending to provide lessons to other developing countries, the World Bank and China’s Ministry of Finance undertook a study in 2019 to understand what China achieved and how it did it. This study was finally published earlier this year.

The World Bank found that between 1978 and 2019, China’s poverty headcount dropped from 770 million to 5.5 million people. In other words, China lifted 765 million (76.5 crore) people from extreme poverty in the past four decades (see CHART 2). The World Bank found that between 1978 and 2019, China’s poverty headcount dropped from 770 million to 5.5 million people.

It means, on average, every year China pulled 19 million (1.9 crore) poor people out of extreme poverty for the past 40 years. In doing so, China accounted for almost 75 per cent of the global reduction in the number of people living in extreme poverty during this period.

In 2021, China declared that it has eradicated extreme poverty according to the national poverty threshold, lifting 765 million people out of poverty since 1978, and that it has built a “moderately prosperous society in all respects.”

Decades of progress in China are also reflected in substantial improvements in other measures of well-being.

Education achievements in China were also relatively higher than in its peers before 1978 and progressed further since, as the country universalised basic and secondary education.

Taken together, improvements in health, education, and income over the four decades are reflected in China’s rising position in the Human Development Index from 106 (out of 144 countries) in 1990 to 85 (out of 189 countries) in 2019, and the narrowing of the gaps with other large developing countries.

How did China do it?

The report states that China’s poverty reduction story is primarily a growth story.

The report states that China’s poverty reduction story is primarily a growth story. But rapid and sustained economic growth was accompanied by a broad-based economic transformation. In other words, reforms began in the agricultural sector, where poor people could benefit directly from improvements in productivity associated with the introduction of market incentives.

“The development of low-skilled, labor-intensive industries provided a source of employment for workers released from agriculture. Urbanization helped migrants take advantage of the new opportunities in the cities, and migrant transfers boosted incomes of their relatives remaining in the villages. Public investment in infrastructure improved living conditions in rural areas but also connected them with urban and export markets,” states the report (see CHART 4). 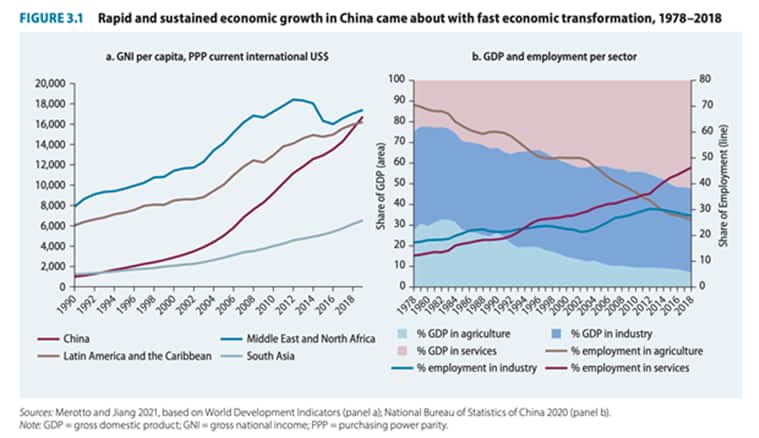 Public investment in infrastructure improved living conditions in rural areas but also connected them with urban and export markets,” states the report.

A crucial point to note here from India’s perspective is that reforms were gradual. Reforms in all these areas were incremental, which may have helped businesses and the population adjust to the rapid pace of change. “The gradualism adopted by China in reforming the economy (associated with Deng Xiaoping saying ‘Crossing the river by feeling the stones’) was reflected in the incremental approach toward the liberalization of agricultural and industrial product markets, the managed approach toward migration and urbanization, and a much larger role for the state in ownership of key assets and the allocation of resources than in other market economies,” finds the World Bank.

2. The second pillar was government policies to alleviate persistent poverty, which initially targeted areas disadvantaged by geography and a lack of economic opportunities, but subsequently focused on poor households, irrespective of their location.

“Broad economic reforms were complemented by strategies, policies, and programs directly targeted at poverty alleviation. China’s poverty alleviation strategy can be characterized as ‘development oriented,’ implying a focus on creating economic opportunities as a means to escape poverty. It evolved from an area-based approach, targeting poor counties and villages as a whole, to a set of interventions targeted at poor households,” states the report.

A component of these policies were social protection policies for poor households and they included specific programs in social assistance, social insurance, social welfare, and other targeted social policies

Also Read |Opinion: There are no poor people, only people in poor places

3. “China’s success benefited from effective governance, which was key to the successful implementation of the growth strategy as well as the evolving set of targeted poverty reduction policies,” states the World Bank. This meant that the institutional arrangements China developed to deliver outcomes were shaped by its specific context.

4. China also benefited from some favourable initial conditions at the time of opening up, such as a relatively high level of human capital, which is widely recognised as a critical input for the population to rapidly benefit from new economic opportunities once market reforms set in.

The World Bank finds that for a country with a level of per capita income among the lowest in the world, China’s population in 1978 had relatively high human capital endowments. In 1949, only 7 percent of those ages 15–64 had completed primary school in China.

“Massive investment in education and expansion of health care since the 1950s resulted in real achievements: in 1978, the infant mortality rate was 52 per 1,000 births, less than half of the average in China’s income group; life expectancy at birth at 66 years far exceeded that of other developing countries; the primary school enrollment rate was 96 per cent; and the secondary school enrollment rate was 49.9 per cent,” it states.

Do you think India can replicate the Chinese success in reducing poverty? If so, are we on track? Are we doing enough?

Send your views and queries to udit.misra@expressindia.com