ExplainSpeaking | A profile of Gujarat’s economy before elections

As Gujarat gears up for the Assembly elections this week, we take a look at the different aspects of the state's economy — factors such as unemployment, per capita income, inflation etc. that often play a crucial role in influencing the voters. Primary school students created a rangoli with a message for Gujarat to get ready for voting ahead of upcoming Assembly election. (Express photo by Nirmal Harindran)

The western Indian state of Gujarat is set to hold elections for the state Assembly this week. Since the time of India’s freedom struggle, and especially because it was the home state of leaders such as Mahatma Gandhi and Sardar Patel, Gujarat was always a politically significant state in India.

However, two factors have further bolstered the state’s political heft over the past three decades.

Subscriber Only Stories
View All
UPSC Key- February 8, 2023: Know about Post-disaster management, Addition...
What secrets do the creatures of the deep hold?
Sanjay Jha writes on Rahul Gandhi’s speech in Parliament: Questions the C...
Delhi Confidential: Hardeep Singh Puri takes part in novel demonstration ...
Buy 2-year plan with SD20 code for special price
ExplainedSpeaking |Why the world is bullish about the Indian economy

One, the Bharatiya Janata Party (or the BJP) has won all the Assembly elections since 1995. And barring a brief period between late 1996 and early 1998, the BJP has been in power in the state. To be precise, it has ruled without break since March 1998. Another five year term would mean that the BJP will extend its unbroken run to 29 years. For perspective, the longest that any party has been in power in a state was the 34 years (1977 to 2011) that the Communist Party of India (Marxist) governed the eastern state of West Bengal.

Two, the presence of Prime Minister Narendra Modi, too, lends importance to Gujarat. Modi had served as the Chief Minister for 12 years, winning three Assembly polls in the process, before shifting to Delhi. During Modi’s tenure as the Chief Minister, the notion of a so-called Gujarat model of development or economy gained traction.

Here’s a look at the different aspects of Gujarat’s economy — factors such as unemployment, per capita income, inflation etc. that often play a crucial role in influencing the voters.

#1: Overall size of the economy

No matter which way one calculates, Gujarat is one of the biggest economies in the country. Table 1 details the top 6 states with the highest “net State Domestic Product (SDP)” in India. Think of the net SDP as the GDP equivalent at the state level. The Table also mentions Kerala even though it is not a state of comparable economic output just to provide a more complete picture; often the “Gujarat model” has been contrasted with the “Kerala model”. Between the seven states mentioned in the data tables, one can also get a fairly wide geographical spread.

Data shows that Gujarat is the fourth-largest economy with a net SDP of Rs 14.6 lakh crore. However, this valuation of economic output is based on current prices. If one were to remove the effect of inflation and look at the “real” net SDP (column 3), one finds that Gujarat becomes the second-largest economy.

It is also worthwhile to look at where Gujarat stood relative to the other big states in 1994-95, just before the BJP started its dominant phase. It is interesting to note that at that time Gujarat was even behind UP and West Bengal in terms of overall output. The only state that has actually outdone Gujarat is Karnataka, which was much smaller in terms of economic output in 1995 but has since rapidly grown to become the third-largest economy within India.

When India’s economy recently overtook the economy of the United Kingdom to become the fifth-largest economy on the planet, it was pointed out that despite this achievement, the UK’s average income levels were twenty-times more than India’s.

Table 2 attempts to place the same states in terms of per capita income in order to understand the average level of economic prosperity in a state. Table 2 attempts to place the same states in terms of per capita income.

Now, Karnataka turns out to be the state with the highest per capita income, closely followed by Gujarat. This is not to suggest that there are no states in India with higher per capita income — Delhi, Goa Sikkim etc. do score higher — but among the bigger states, this ranking still holds.

Population size of different states imply that UP lags far behind most states in India despite having a much higher overall output. Kerala also shines.

When compared to how things were in 1995, it is interesting to note that Gujarat was, even then, the second-richest in terms of average incomes.

And while holding on to the 2nd rank is no mean feat — Tamil Nadu, for instance, failed to stay at the top — it is Karnataka’s rise that has been far more phenomenal.

Table 3 details the unemployment rate (per thousand people) in Rural and Urban areas for the biggest state economies in India (plus Kerala). Gujarat had one of the lowest unemployment rate among all the states and well below the national average.

Advertisement
P Chidambaram writes |Gujarat: A model not to follow

Just as Gujarat had the lowest unemployment rate among all the big economies, it also had the lowest retail inflation rate among them in each of the past five years (barring UP in 2017-18). Gujarat’s retail inflation rate (that is, based on Consumer Price Index or CPI) was also lower than the national average for each of the five years (see Table 4). Of course, this data does cover the past few months of 2022-23.

Table 4 details the inflation rate for the biggest state economies in India (plus Kerala) from 2017-2022.

High inflation has become a global menace and has resulted in voters throwing out incumbent governments to express their anger. However, Gujarat has performed relatively well on this metric for the majority of the current term. Table 5 details the Daily Wages (in Rs) in 2020-21 for the seven states under consideration. 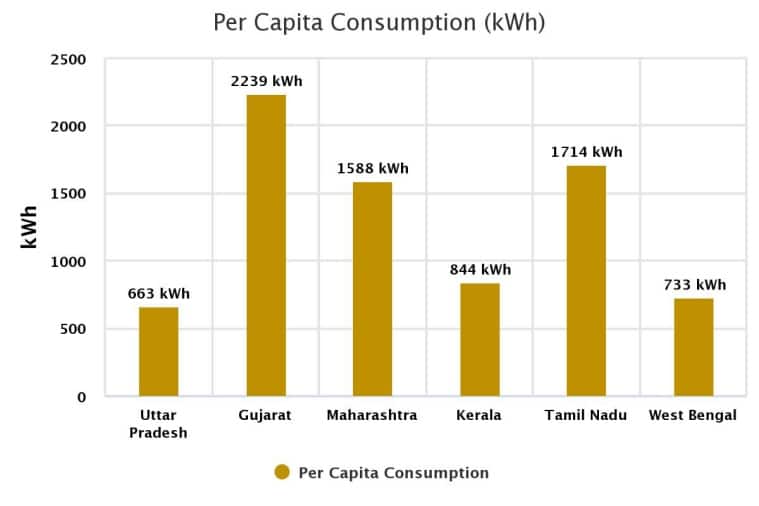 Chart 6 shows the level of per capita power consumption in the seven states under consideration.

Typically it is found that financially better off economies tend to have inhabitants who are physically better off. That’s because a rich state with richer inhabitants and a larger government capacity, can invest in improving the health and wellbeing of its inhabitants.

However, it is on these metrics that Gujarat falters the most.

Table 7 details Gujarat’s standing on a whole host of crucial metrics. But be it infant mortality rate or the maternal mortality rate or the prevalence of anaemia among infants and pregnant mothers or even indeed the number of beds in government-owned hospitals, Gujarat lags behind the other big economies. In particular, it lags considerably behind the Kerala achievements. That was a summary of where Gujarat stands relative to the rest of the country as well as relative to where it was in the past.

Lastly, do watch the latest episode of The Express Economist. This time it features Dr C Rangarajan, former RBI Governor and Chairman of the Finance Commission, on the state of the Indian economy.